UCLA graduate student Tyler Watson has been honored by University of California President Janet Napolitano with the President’s Award for Outstanding Student Leadership. He is one of three UC students who were recognized by Napolitano on May 11 during a Board of Regents meeting.

“I was very surprised to receive this award,” said Watson, a doctoral student in environmental health sciences in the Fielding School of Public Health. “I am humbled by the other current and past recipients and thankful to work with such effective and inspiring student leaders at UCLA and across the UC. This award has motivated me to continue working hard and expanding my service to UCLA through the Healthy Campus Initiative and the UC through the Global Food Initiative.”

A Global Food Initiative student ambassador, Watson was one of 44 UC students, including six Bruins, who received a Global Food Initiative fellowship in fall 2015. With this fellowship, Watson is co -leading a multi-pronged project to help alleviate food insecurity at UCLA. He is also collaborating with the L.A. Food Policy Council and Los Angeles County Department of Public Health to explore expansion of food recovery across the county. 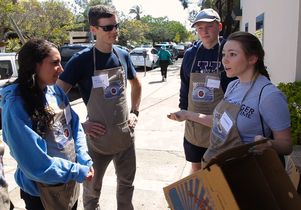 John Vande Wege/UCLA
Tyler Watson, center, gathers with UCLA volunteers at the Pacific Palisades Farmers Market where they glean donated produce to feed those in need.

In addition, Watson is a researcher with the UCLA Healthy Campus Initiative. He has helped UCLA assess how the built environment affects the initiative’s goals, and, as an outgrowth of that work, helped launch the Stair Well project, which encourages campus residents and visitors to take the stairs instead of the elevator.

“The early data suggest a decrease in the elevator rides and an increase in the use of the stairwell since the program launch,” said Mick Deluca, assistant vice chancellor of campus life and Healthy Campus Initiative MoveWell co-leader, who nominated Watson.

Watson has also been involved in developing methods to increase bicycle use on and near campus. Efforts have included organizing the UCLA Bicycle Coalition to campaign for bicycle lanes; successfully paving the way for placement of clearly marked bike lanes on campus; and leading the planning and promotion for UCLA’s first bicycle counter.

He also helped spearhead a campaign for an environmentally conscious water fountain as a way to promote the benefits of drinking water while eliminating plastic bottles.

“Having been employed at UCLA for 27 years and in the field of recreation and student affairs on a university campus for 36 years, I have met and interacted with thousands of students and young professionals,” said Deluca. “Simply stated, Tyler is one of those rare individuals you come across in a career who stands out in all aspects of their life, and provides real inspiration and motivation as to the value of our work. … He possesses a true passion in assisting others and demonstrates strong work ethic, commitment, initiative, organization, leadership and a thirst for development, policy and education.”

Other student winners of the leadership award were from UC Davis: Lauren Jabusch for her efforts on sustainability, inclusiveness and diversity, and Mariah Watson for her work on a wide range of student issues, including diversity, inclusion, hunger, mental health and homelessness.

Established in 2010, the award recognizes undergraduate, graduate and professional students, as well as campus-based student organizations, for outstanding efforts in promoting and supporting multi-campus and presidential initiatives.

Nominations for this year’s awards were solicited from the chancellors at all 10 UC campuses and from the UC Student Association. Individual recipients each received a $2,000 grant.