From Hong Kong to Kyrgyzstan, New York to Seattle, and more than ever before all over greater Los Angeles, UCLA’s annual Volunteer Day served communities around the world on Sept. 28.

The 11th Volunteer Day celebrated UCLA’s 100th year by sending Bruins to more than 100 locations, the most sites ever. Students, alumni, staff, faculty and community members worked together to make a difference at 76 locations around L.A., as well as sites across California, in eight other states and five other countries for a global day of service.

UCLA’s Volunteer Center, which is led by the UCLA Alumni Association, runs Volunteer Day annually at the beginning of the school year. For many Bruins, the day becomes a gateway to year-round service through the center’s other volunteer opportunities. On Saturday, Bruins helped out at homeless shelters and food banks, socialized with residents at senior living facilities, cleaned up at parks and beaches, participated in beautification projects at underserved schools and youth centers, and more.

“A mass of students have come out, and they are really energetic and they really worked hard,” said Brent Tilley, principal of La Tijera K-8 Academy of Excellence Charter School in Inglewood, where nearly 100 volunteers from UCLA and the school community worked together Saturday morning.

“UCLA brings out so many people, so we can really get so much done that we couldn’t do alone. It really galvanizes our community and brings us together,” Tilley said. “The university has been an awesome part of our school, and we see that because they’re a public school in L.A., they really get involved.” 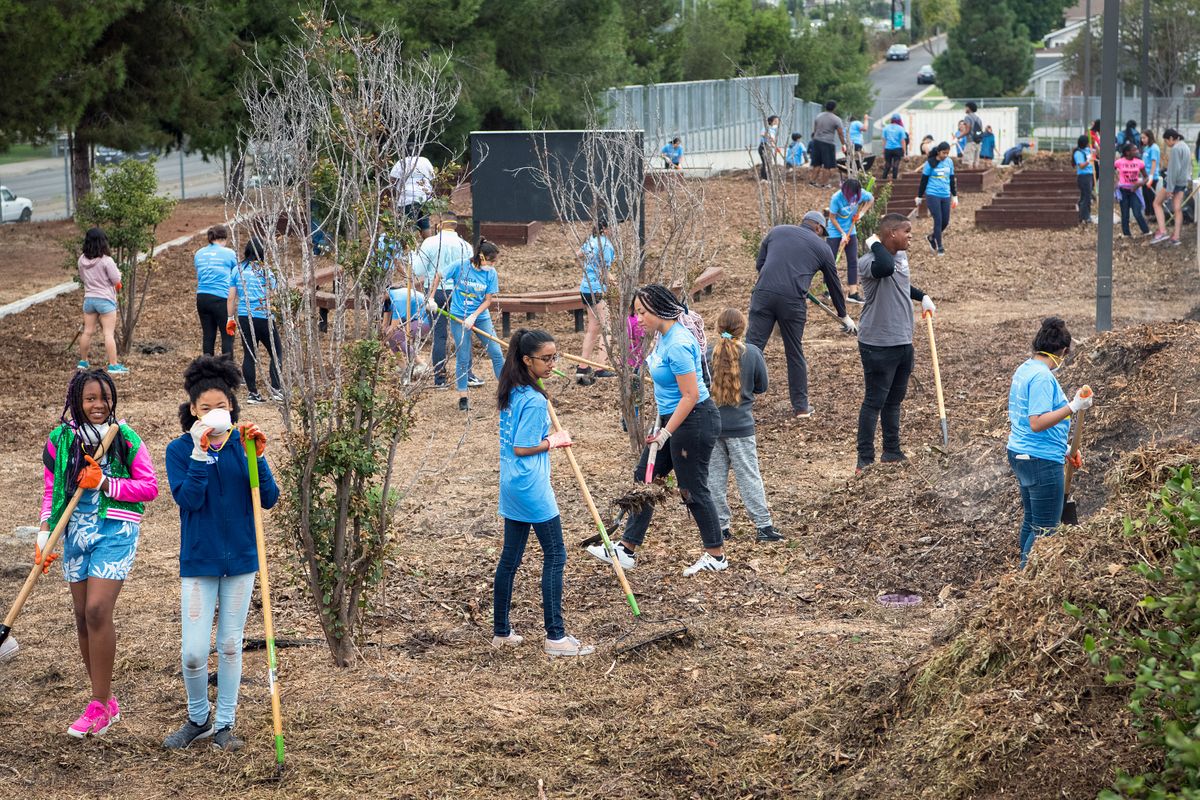 Since it began in 2009, the 11 Volunteer Days have included more than 56,000 volunteers on more than 500 projects, according to the Volunteer Center.

At La Tijera, two busloads of UCLA volunteers painted walls, spread mulch and prepared garden beds for new plantings so that the elementary students can learn about growing food.

“I always loved volunteering in high school, so I think it’s great that UCLA dedicates a day to it,” said Chrissie Sohn, a New Mexico native who, with her Singaporean roommate, was seeing Los Angeles outside of campus for the first time since the two started college on Thursday. One of the La Tijera teachers even gave them a motherly pep talk, which they said felt comforting since they were both missing their moms. “Volunteering off campus helps me feel like we’re already part of the community.”

In west Los Angeles, dozens of students shoveled mulch, weeded garden beds and raked leaves at the Veterans Native Garden on the campus of the Veterans Affairs Greater Los Angeles Healthcare System. The 14-acre garden was adopted several years ago by the UCLA Veterans Resource Center and the UCLA Student Veterans of America chapter. UCLA Chancellor Gene Block attended to thank the volunteers, including more than a dozen student veterans representing all branches of the military, for their help strengthening UCLA’s partnership with the VA to support veterans.

“I really appreciate everyone being here, especially our veterans,” Block said to the volunteers as they prepared to work. “This helps and it’s a part of the effort to bring us both together, so we appreciate all you’re doing.” 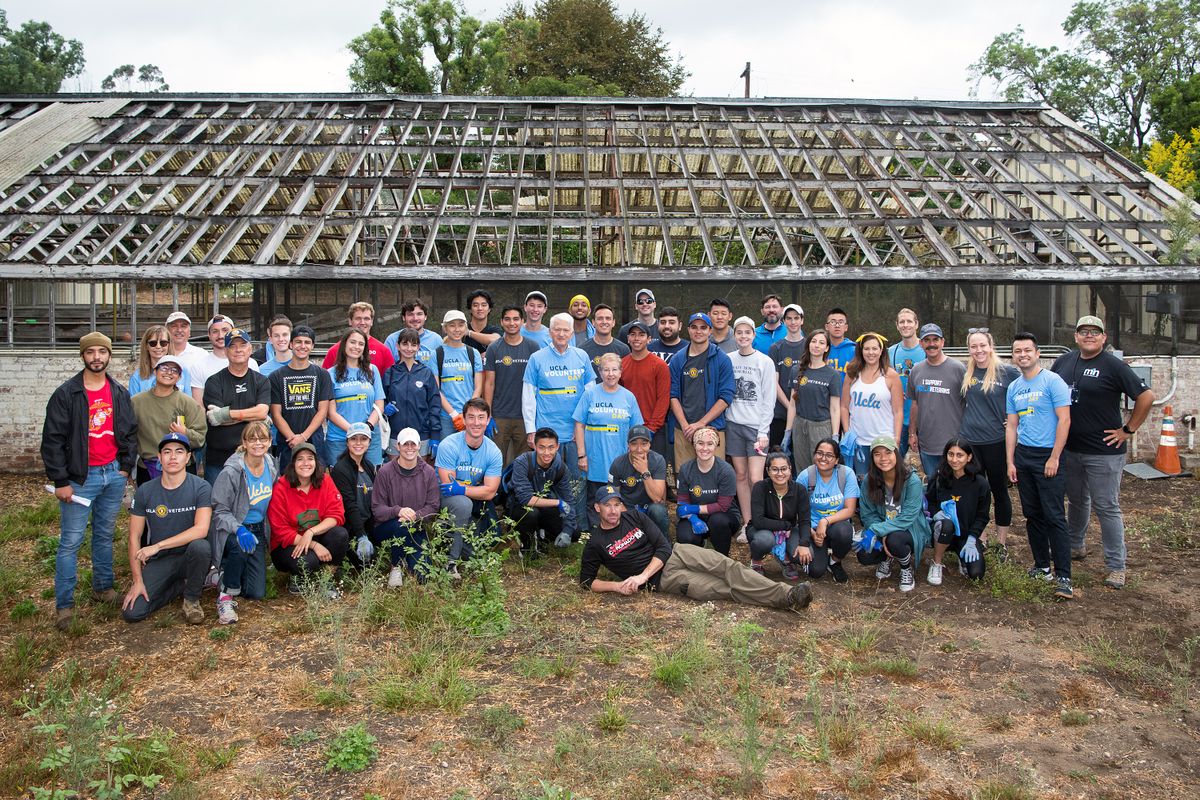 Mike Baker/UCLA
UCLA volunteers, including Chancellor Gene Block and his wife, Carol, at the Veterans Native Garden on the campus of the Veterans Affairs Greater Los Angeles Healthcare System.

Brice Bartlette, president of UCLA’s Student Veterans of America, who served in the Marines and is now a UCLA senior, thanked the volunteers for lending a hand to improve the garden for UCLA veterans, and also the homeless veterans in temporary housing at the VA.

“UCLA has a commitment to a lot of programs in the greater Los Angeles area, and nationally and even internationally with a lot of the student groups that are on the campus,” Bartlette said. “So thank you for choosing to come out and support the Student Veterans of America, and especially those veterans at the domiciliary in this area.”

More than 20 Bruins ― a mix of alumni, staff and their children who embodied the idea that the lessons of service learned on campus become a lifelong commitment — volunteered to help clean up the Madrona Marsh Preserve in Torrance, about 21 miles south of Westwood.

A small contingent from the UCLA School of Law’s Emmett Institute on Climate Change and the Law teamed up with Los Angeles Neighborhood Land Trust to help clean Avalon and Gage pocket park in South Los Angeles. Beth Kent, a former president of the Environmental Law Society at UCLA, is the policy and legal fellow for the trust, which focuses on access to parks in Los Angeles’ underserved neighborhoods.

Thousands of miles away in China, volunteers with UCLA Alumni’s South China Network visited Shenzhen University to talk to students about how to protect pets and stray animals.

“There are more and more people in China with pets, and we hope everyone can treat their pets with kindness and respect,” said project leader Edison Song. “As Bruins, we are always glad to give back.” 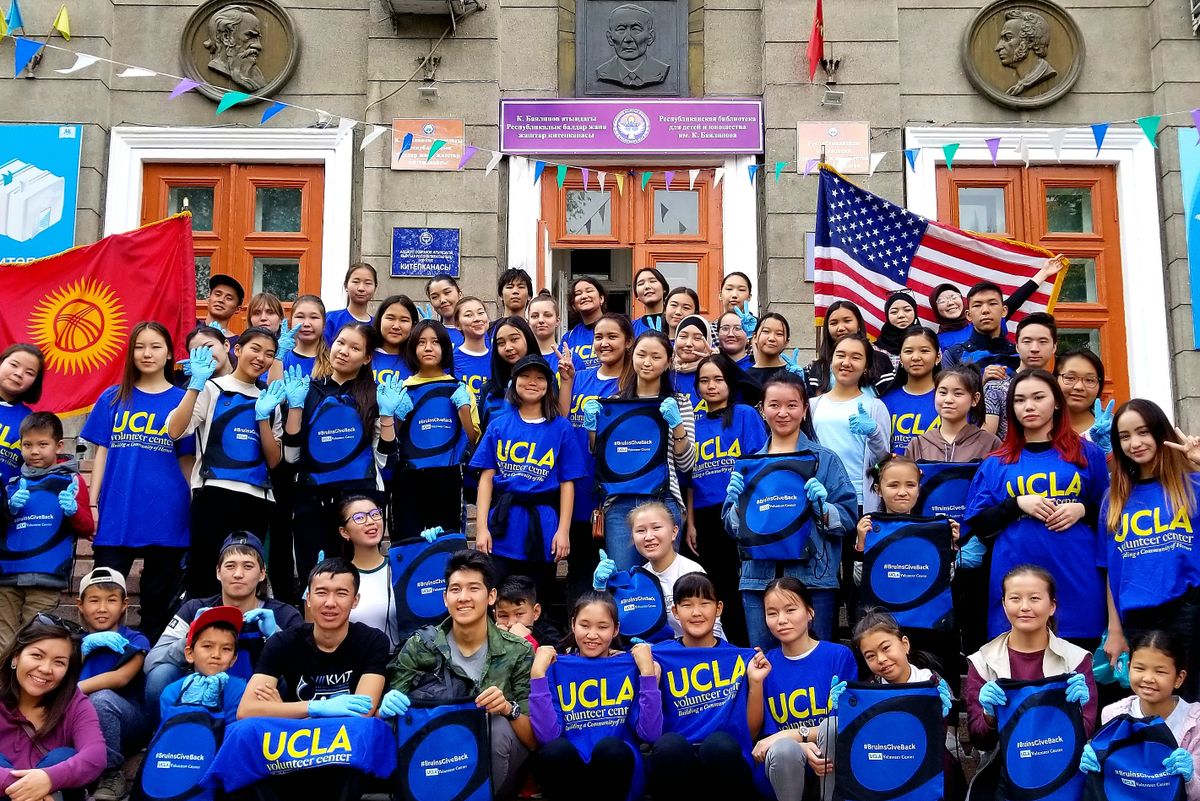 In neighboring Kyrgyzstan, one far-flung Bruin organized a “plogging” event — picking up trash while jogging — at a park and library. Alumnus and organizer Carlos Collard remembered spending countless hours volunteering when he was a student. When he learned that Volunteer Day needed alumni to set up projects overseas, he decided to visit friends in Kyrgyzstan — friends he made while volunteering in Los Angeles — to bring the UCLA spirit to them.

“I thought, this is an opportunity to do something special in a special year for UCLA, and to have friends in another country experience this,” Collard said. “It comes down to that core of building relationships and showing people that you care, and that you’re interested in learning where they’re from and what they’re about.”

Seventy volunteers turned out in Kyrgyzstan, and the good deeds spread when city trash workers happened to see the volunteers, and offered to drive their trash truck over so volunteers wouldn’t have to haul 100 bags of trash. It was a recurring story — at a park clean-up in Harlem, alumni in New York also got a helping hand from passing park workers. The volunteers included one married couple who met while they were students at UCLA and were celebrating their anniversary by joining the group to weed, sweep and collect garbage in Morningside Park.

“It was important to volunteer in the Bristol Marsh Cleanup because it was an opportunity for Bruins to protect a unique and important environmental resource,” said alumna Noelle Watanabe. “By picking up plastic, glass, Styrofoam, cigarette butts, and more, we help keep the community's water clean and protect this delicate ecosystem that supports many species of birds, plants, and mammals. We also leave the area clean for the people in the community to enjoy.”