As a journalist who writes about the types of people whose stories have rarely appeared in mainstream media, Walter Thompson-Hernández feels “the weight.”

Now that major media outlets are finally starting to pay attention to those historically underrepresented groups, Thompson-Hernández said he has a special responsibility as a person of color: to share those people’s experiences and ideas without fetishizing them.

“I’m always asking myself, ‘How am I documenting this community? Am I getting it right?’” the New York Times reporter said. “I’m thinking about how some 65-year-old white guy who lives on the Upper East Side of Manhattan reads this story. He’s going to open up the paper and read about the Compton Cowboys and is he going to learn or is he going to have his stereotypes confirmed?”

To avoid sensationalizing the Compton Cowboys, African-American men who ride horses to combat negative stereotypes, or the albino community in Ghana, or a New York City burlesque troupe created by queer women and women of color, Thompson-Hernández relies on lessons he learned through his lifelong ties with UCLA.

The 33-year-old learned from his mother about the struggles people of color face in controlling how their narratives are portrayed. Eleuteria Hernández-Gonzalez, who was then a Ph.D. student in the Spanish and Portuguese department, was among the UCLA students, faculty and community members who in 1993 held a 14-day hunger strike to save Chicana and Chicano studies at UCLA. Thompson-Hernández, just 7 at the time, didn’t fast, but during the protest, he did take his first photo — foreshadowing his career as a multimedia journalist — and his participation in protests and demonstrations would soon animate his life.

Thompson-Hernández’s UCLA connections run deep: He attended the UCLA Lab School, grew up playing basketball in campus gyms — including with future Bruin and NBA star Russell Westbrook — and began work toward a doctorate in Chicana and Chicano studies. Although he withdrew from his studies in 2017, when he realized journalism was his true calling, Thompson-Hernández said he absorbed lessons about conducting research and analysis that have made him a better reporter.

“The thing about the work that I do at the Times is usually reporters or journalists don’t have this strong sort of academic background,” he said while speaking in May to a small group of UCLA students, faculty and staff. “I’m kind of doing like a quick version of ethnography.”

Thompson-Hernández was raised in Los Angeles by his mom and his aunt, both of whom graduated from UCLA. His mother also began her graduate work at UCLA. And although she didn’t complete her doctorate — she left to support her family — the young Thompson-Hernández was surrounded by scholars like professors Abel Valenzuela, Reynaldo Macias and Eric Avila, all of whom he has known for most of his life.

“Growing up at UCLA impacted me in a really incredible way,” he said. “My mom was bringing home novels and literature that I used to read every single day. I was reading all these incredible Chicano and Chicana authors. That influenced me to think about the world in a critical way.”

Despite those influences, Thompson-Hernández had a rough time as a teen. He was kicked out of several high schools and spent time in juvenile hall. The murder of a close friend eventually shook him out of that phase.

“My friend Danny got shot and killed in his neighborhood in South L.A.,” Thompson-Hernández said. “That made me wake up and realize a lot of the sacrifices my mom had made. She came to this country from Mexico at 16 and graduated from UCLA.”

So Thompson-Hernández refocused on school and playing basketball. He graduated from Venice High School and went on to the University of Portland, where he played Division I basketball. After graduating in 2009, he played professional basketball in Veracruz, Mexico and throughout Latin America.

With his first paycheck, he bought a camera.

“Veracruz historically has been Afro-Mexican,” said Thompson-Hernández, whose father is African-American. “I was living 10 minutes away from a town called Yanga, the site of the first successful African slave revolt. So there were people there who looked like me. I started spending a lot more time in that community than I was at practice.” 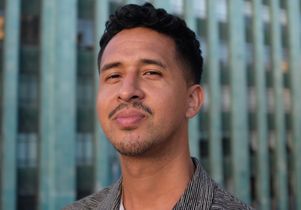 In 2012, he traded shooting baskets for shooting pictures and moved back to Los Angeles to begin working as a program counselor at a mental health hospital. He also started to pursue photography more seriously. The self-trained photographer and videographer — to this day, he has never had formal training in either field — created the Blaxicans of Los Angeles Instagram account, which would be featured on NPR and CNN, and in the Los Angeles Times.

After a few years, he enrolled at Stanford University, where he earned a master’s degree in Latin American studies. But Thompson-Hernández could already sense a career as a professor wasn’t for him. Although he had gotten multimedia stories published by NPR’s Latino USA, Buzzfeed, Remezcla and Fusion, Thompson-Hernández found his preferred form of storytelling wasn’t readily accepted in academia.

When he was at Stanford and expressed a desire to present some of his research in multimedia form, someone said he should pursue a master’s in fine arts instead. This feeling of not fitting in continued when he got to UCLA for his doctorate.

“There’s so much great research being done here — students are brilliant and have these incredible topics of research that nobody really reads,” he said. “That’s why I left. I wanted to tell stories in a more public way.”

In May 2018, Thompson-Hernández was invited by Kelly Lytle Hernández, the interim director of the UCLA Bunche Center for African American Studies, to speak with students — graduate students in particular — about careers outside of the tenure track and the intersections between journalism and academia.

“The more technologically savvy and multimedia-savvy that Ph.D. students are, I think the more chances that they’ll have to land a solid job that doesn’t have to be a tenured faculty position,” Thompson-Hernández said.

He also talked about the insecurities he still faces, even as a New York Times reporter.

“Imposter syndrome never ends,” said Thompson-Hernández, who joined the paper in early 2018 as one of three Surfacing reporters who are charged with finding “interesting stories of hidden communities” across the world and telling them through multimedia.

As much as he appreciates having the platform of the Times and the newspaper dispatching him — a person of color — to share those stories to a massive and influential audience, Thompson-Hernández wants to guard against his stories reading as though he is “discovering new communities in the world” or “exoticizing” their experiences.

“I find that incredibly problematic, because that taps into an 18th century colonial ‘Heart of Darkness’ vibe,” Thompson- Hernández said.

“These communities that I’m profiling, and those individuals, have such amazing stories that I feel like the world needs to know about,” he said. “I want to provoke people to think and move and act in ways that they haven’t before.”