Thanks to an anonymous donor who made a significant gift to the Mo Ostin Basketball Center project, the UCLA Athletic Department announced today that Meyers Drysdale's legacy and leadership will be honored by naming the new state-of-the-art facility the Ann Meyers Drysdale Court.

"Annie helped rewrite the history of American sport," said Director of Athletics Dan Guerrero. "And now, thanks to the generosity and vision this philanthropy provides, generations of women who step inside the Mo Ostin Basketball Center will understand that at UCLA, anything is possible.”

"When Dan first gave me the news, I was quite literally at a loss for words,” said Meyers Drysdale. “I wrote a letter a while back to UCLA fans ... quoting this building's namesake, Mo Ostin, when he said, ‘UCLA basketball is more than an athletic program, it is an iconic and uniquely Los Angeles institution. It creates a sense of family, inspires an immense amount of pride and engenders a passionate following in ways this town rarely sees.’  The generosity of this donation proves that no words could ring more true. Here I was writing about Mo, and now to be part of his building — wow. I already considered UCLA home, and the people that comprise it family, but this takes it to a level beyond what I ever thought was possible.”

Meyers Drysdale's basketball career began when she became the first high school player to make a United States national team in 1974, the first of many athletic "firsts" in her life. Following high school, she became the first woman to receive a full athletic scholarship from UCLA; the first NCAA Division l player ever to record a quadruple-double (double digits in four statistical categories in a single game); the first four-time Kodak All-American; the first woman to be inducted into the UCLA Athletics Hall of Fame; and, with her husband, Dodger pitching great Don Drysdale, the first married couple to be inducted into their respective sports’ Halls of Fame.

After capturing a silver medal at the 1976 Olympic Games in Montreal as a member of the U.S. women’s basketball team, Meyers Drysdale helped lead the Bruins to the AIAW (Association for Intercollegiate Athletics for Women) basketball national championship in 1978. Following her time in Westwood, Meyers Drysdale, who was the No. 1 draft pick in the Women’s Professional Basketball League, became the first and only female ever to sign a free-agent contract with an NBA team, joining the Indiana Pacers in 1979.  After being released by the Pacers in the preseason, she stayed with the organization to serve as a color commentator for its broadcasts and became the first woman to be on the call of an NBA game. 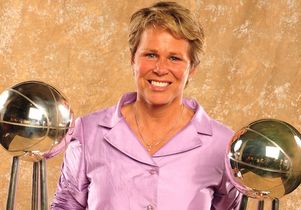 The mother of three is currently a vice president of both the Phoenix Mercury and the Phoenix Suns, after previously serving  five  successful  seasons  as  general  manager  of  the Mercury. She constructed the franchise’s first two WNBA championship teams in 2007 and 2009. In addition to her current duties with the Mercury and Suns, Meyers Drysdale has remained active in sports broadcasting.

Located near Pauley Pavilion at the south end of the Los Angeles Tennis Center, the Mo Ostin Basketball Center will include separate courts for both the men’s and women’s programs, locker rooms, athletic training areas, a strength and conditioning facility, coaches’ offices, team meeting rooms, equipment rooms and video rooms among various amenities while incorporating several elements paying homage to the rich history of UCLA basketball.

As of this month, the UCLA Athletic Department has now totaled in excess of $18 million in private funds towards the basketball center, which broke ground this past August. UCLA Athletics is in the process of working to reach a total of $25 million in private funding before the project’s anticipated completion this year. The gifts are part of the $4.2 billion UCLA Centennial Campaign, which is scheduled to conclude in December 2019 during UCLA’s 100th anniversary year.