For the last 18 years, Lisa Snyder has been bringing to vibrant life the bygone glory of a true architectural, social and cultural wonder — the World’s Columbian Exposition of 1893, known to many as the Chicago World’s Fair.

For six months on the cusp of a new century, more than 27 million people from all over the world came to the 633-acre site in Chicago’s Jackson Park to marvel at this stunning showcase of ingenuity, invention, industrial achievement and entertainment — spread out among more than 200 temporary and permanent structures that represented 46 nations, including grand pavilions and vast exhibition halls.

Using advanced interactive media technology, Snyder, a modeling and visualization expert with UCLA’s Institute for Digital Research and Education, has now made it possible for contemporary “visitors” to stroll through the grounds of the exposition in an immersive, full-color, 3-D “space” and share the excitement of visitors on the scene, garbed in period dress.

This past Saturday at a sold-out event in Chicago, Snyder presented her simulation to an audience at the Museum of Science and Industry, the only exposition building to have survived at the Jackson Park site, where it began life as the Fine Arts Building. Assisting her at the event was the City of Chicago Cultural Historian Tim Samuelson. 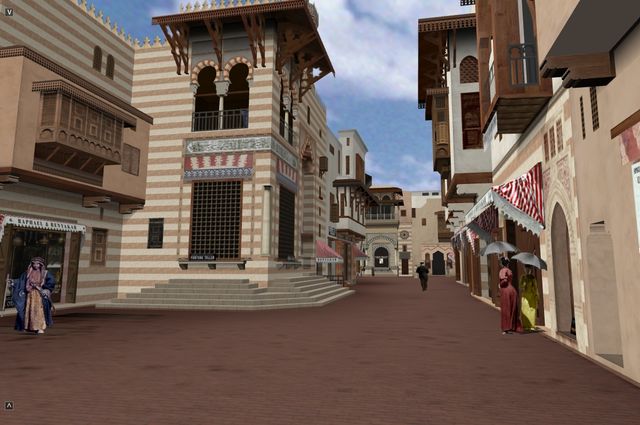 Lisa Snyder/UCLA
Viewers can stroll along the Street of Cairo where exotic dancers introduced the nation to the Dans du Ventre, the belly dance.

When Snyder began the project as a member of UCLA’s Urban Simulation Team in 1997, she intended to use it as a test bed to study how students learn and teachers instruct using interactive media technology. She decided on the World’s Columbian Exposition, which celebrated the 400th anniversary of the year Christopher Columbus landed in America, because of the project’s interdisciplinary draw on fields ranging from architectural history and urban planning to African-American and women’s studies.

With that kind of reach, she knew it would never bore her, and it hasn’t for nearly two decades. “Each building has its own history, its own people involved,” Snyder said. “It has managed to keep my interest all these years.”

Models of most of the major buildings of the fair are in her simulation, complete with views of exteriors and some interiors of the buildings. Visitors can see the exhibition halls that were built around the Court of Honor and Wooded Island. There are replicas of structures associated with Columbus, including his three ships — the Niña, the Pinta and the Santa Maria — and the Convent of La Rabida in Palos, Spain, where Columbus refined his plans for an expedition to sail westward.

The Fine Arts Building is there as well, modeled by David Sartoris of UCLA’s Capital Programs, as is the tantalizing Street of Cairo on the Midway Plaisance, with more than 60 different shops rendered with exquisite detail. The attraction gained fame when exotic dancers introduced the nation to the Dans du Ventre (popularly known as the belly dance).

Snyder has been dedicated to reconstructing the landscape of the fair to be as true to life as possible, using archival photographs and written material gathered in the U.S. and internationally. For every one hour of computer modeling, she estimates she has spent about five hours on research.

The fair occurred before the popularization of color photography and film. So to add realistic color to buildings, Snyder sifted through watercolors and tinted photographs looking for these details. Her attention to detail was so precise that she searched old horticulture magazines to figure out what plant varieties seedsmen and nurserymen exhibited at specific plots on the fairgrounds. She then added those plants to her simulation. 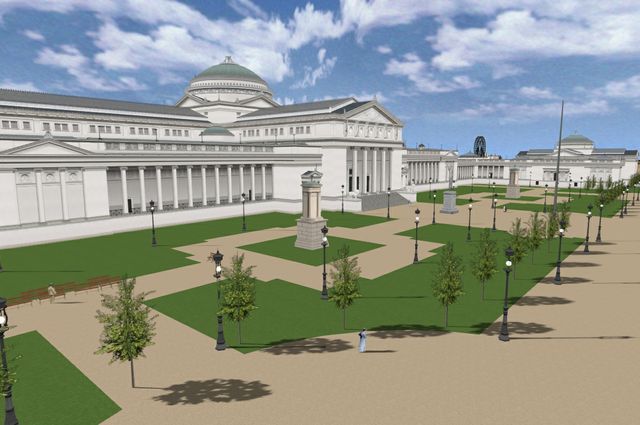 Lisa Snyder/UCLA
The Fine Arts Building, now the Museum of Science and Industry, is the only surviving structure of the Chicago World’s Fair.

Unfortunately, some details have been lost to history, Snyder said. On the Street of Cairo, for example, some of the shop signs were not clearly identifiable in any photographs or written materials she could find. This challenge sparked an internal academic debate about how to visually depict what could not be found.

Snyder’s solution was to faithfully replicate what she could from visual evidence and use “dummy” text to represent illegible words or phrases. She also added subtle graphical “author’s notes” when necessary with references to archival evidence that describe shops’ wares.

“I was trying to maintain the user’s willing suspension of disbelief. You want [the environment] to be as reasonably complete as possible without a lot of jarring elements that are going to take you out of the scene,” Snyder explained.

While Snyder said the reconstruction process will become more difficult as she moves into elements of the fair that were not well documented, she said she has enough information to keep extending the boundaries of this simulated world for the rest of her life.

Last year she won a grant from the National Endowment for the Humanities to develop a generalizable interface for scholars working with 3-D content. The software, known as VSim, allows for real-time exploration of virtual environments. With it, educators can use a narrative feature to develop interactive presentations in the 3-D space. In addition, the software allows users to embed annotations, as well as primary and secondary historical sources about the modeled environment, into the simulation.

The ongoing development of VSim is paving the way for classroom experiments in advance of a broader release of the software. Last spring, Snyder shared the model and software with educators at Carmel High School in Indiana where students in English classes were reading Erik Larson’s non-fiction blockbuster, “The Devil in the White City: Murder, Magic, and Madness at the Fair that Changed America,” which will soon be made into a movie. Students used the software as a visual to help contextualize their reading of the book.

Whenever audiences see the simulation — Snyder’s model is regularly presented to Museum of Science and Industry visitors — she’s discovered that people ask very detailed questions about the fair. True to form, the first question that popped up following Saturday’s presentation in Chicago was “Where were the bathrooms?” (Restrooms were in all the major exhibition halls and scattered throughout the fairgrounds, most of them available for free.)

These types of questions are proof that the interactive simulation is providing a fundamentally different understanding of the exposition than is possible with static images, Snyder said.

“Those aren’t the kind of questions sparked by looking at a photograph,” she noted.

Learn more about Snyder’s project. Archive of Snyder’s images of the fair,.