If you ask people where the wild things are at UCLA, most will point to fraternity row at the north end of Gayley. Or they might direct you to the southern edge of the campus, where a 7.5-acre public living museum of plants collected from around the world beckons. There, visitors stroll along a meandering footpath that leads from a prickly desert garden to a fern-shaded creek where turtles sunbathe before the path crosses over to a verdant conifer forest.

Biodiversity in the Botanical Garden

One reason visitors are drawn to the Mildred E. Mathias Botanical Garden is its diverse ecosystems, with more than 3,000 species of plants from Australia, Madagascar, Hawaii, China and other faraway places.

The hum from the constant stream of traffic on adjacent Hilgard and Le Conte avenues belies what’s happening nearby. Visitors to the Mathias Garden have spotted more than 500 species of not only plants but also birds, insects and other animals in the garden, logging them into the iNaturalist website that tracks campus biodiversity. 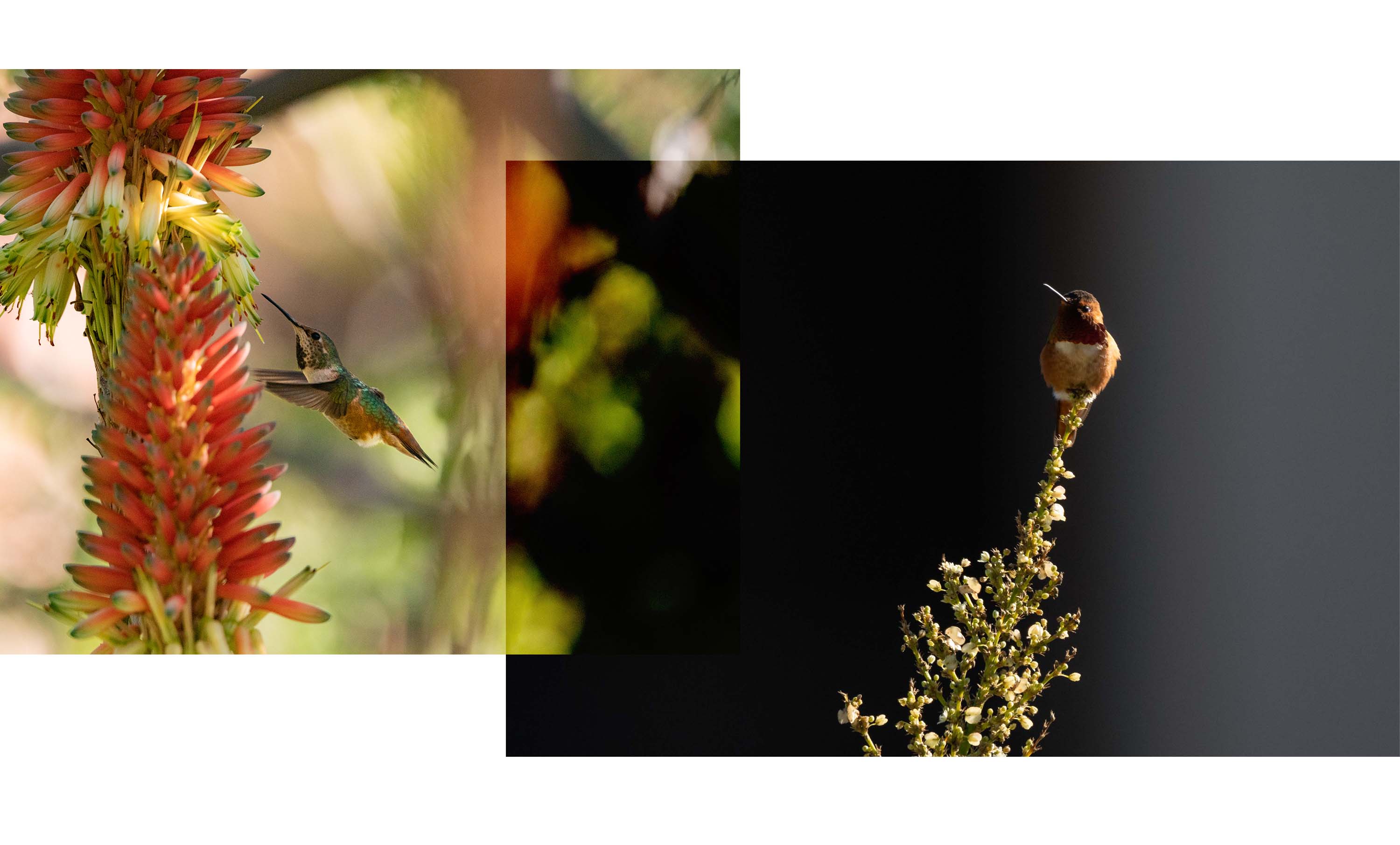 On a recent sunny morning in January, a yellow-rumped warbler, a red-whiskered bulbul, a California towhee, an Allen’s hummingbird and a northern mockingbird all zipped through the garden. Later, a yellow-chevroned parakeet showed up to flit around a Brazilian silk floss tree that it seemed to favor.

But the Mathias Garden is only one of three major natural spaces that coexist with paved roads, a major hospital, parking structures, residence halls, classroom buildings and other parts of a sprawling built environment.

Just north of the UCLA Anderson School of Management, a section of Stone Canyon Creek flows with the winter rains before going underground. In partnership with the Bay Foundation, students in the biology class taught by Alison Lipman ’96, along with other volunteers with the student-run Ecological Restoration Association have pulled out invasive weeds and transplanted native plants to help stabilize the creek’s banks and enhance the quality of the water that flows downstream.

Observe some of the campus’s plant and animal species up close in their habitats.

The “wildest” place on campus, though, is the least visited, as well as the least visible to many. You won’t find UCLA’s largest patch of native habitat on most campus maps. It is not officially open to the public and is reserved for teaching and research.

Located between Bellagio Drive and Veteran Avenue, Sage Hill is a 3.5-acre section of coastal sage scrub on the northwest corner of the campus.

When UCLA biogeographer Thomas Gillespie Ph.D. ’98 looks at this secluded hillside, which might seem like any other to the casual observer, he sees a particular type of landscape — one that once existed all over Southern California.

“Here is the only native grassland of its size left in Los Angeles,” says the professor, who has worked in biodiversity hot spots all over the world that are threatened by human incursion.

According to the UCLA Institute of the Environment and Sustainability (IoES), which oversees Sage Hill, the area represents the largest remaining patch of native California habitat in West Los Angeles south of Sunset Boulevard. 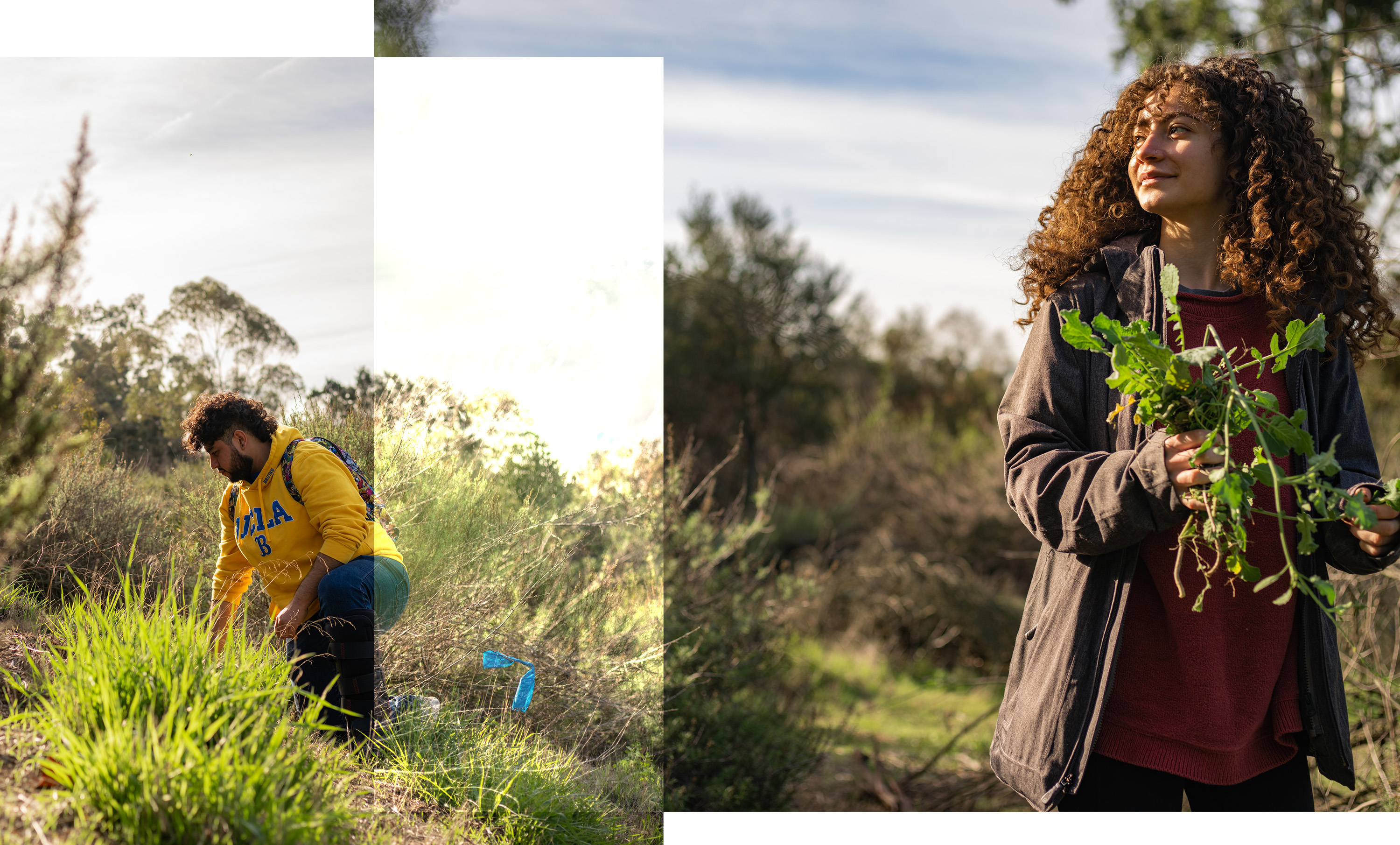 Sage Hill’s status as an exceptionally high-quality native California ecosystem was recently confirmed by Isaac Brown D. Env. ’19, senior scientist at Stillwater Sciences. He is surveying hundreds of parcels of green space on campus as part of the creation of UCLA’s updated landscape plan, an effort led by a team that includes Nurit Katz, M.B.A., M.P.P. ’08, chief sustainability officer for the campus. “As part of the plan,” Katz says, “We’re really trying to focus on habitat and biodiversity and thinking about what the future of UCLA’s landscape could be.”

The only places on campus that achieve the highest possible score for habitat value are on Sage Hill, she says. The botanical garden, while valued as a teaching and research resource, received a lower score because it functions as an arboretum with many nonnative plant species.

“Sage Hill is not a place that gets a lot of foot traffic. This is a hidden gem. It’s such an incredible asset to the campus. It’s part of UCLA.”

On Sage Hill, though, two native grasses — giant wild rye and purple needlegrass — grow. Once one of the most widespread of the native California grasses, purple needlegrass is now rare. It competes for survival with invasive nonnative plants that are threatening to overrun parts of the hillside, Gillespie says.

For decades, students studying geography, biology and environmental science have been applying what they have learned in the classroom to Sage Hill. Guided by faculty, students have been removing invasive weeds and adding native plants in strategic spaces, then monitoring their growth. The students also have raised awareness about the importance of saving Sage Hill’s rich biodiversity.

“This is the last piece of untouched native land in all of West L.A., and that makes it super-valuable,” says student Tara Bretzfelder, who is making plans to pull out invasives before plants such as mustard explode in the spring and reseed the area. The goal of her senior environmental science practicum class is to create a plan to manage invasive plants. “We need to keep this safe and put it back the way it was. Conserving this habitat will ensure that we and future generations know what it’s supposed to look like.” 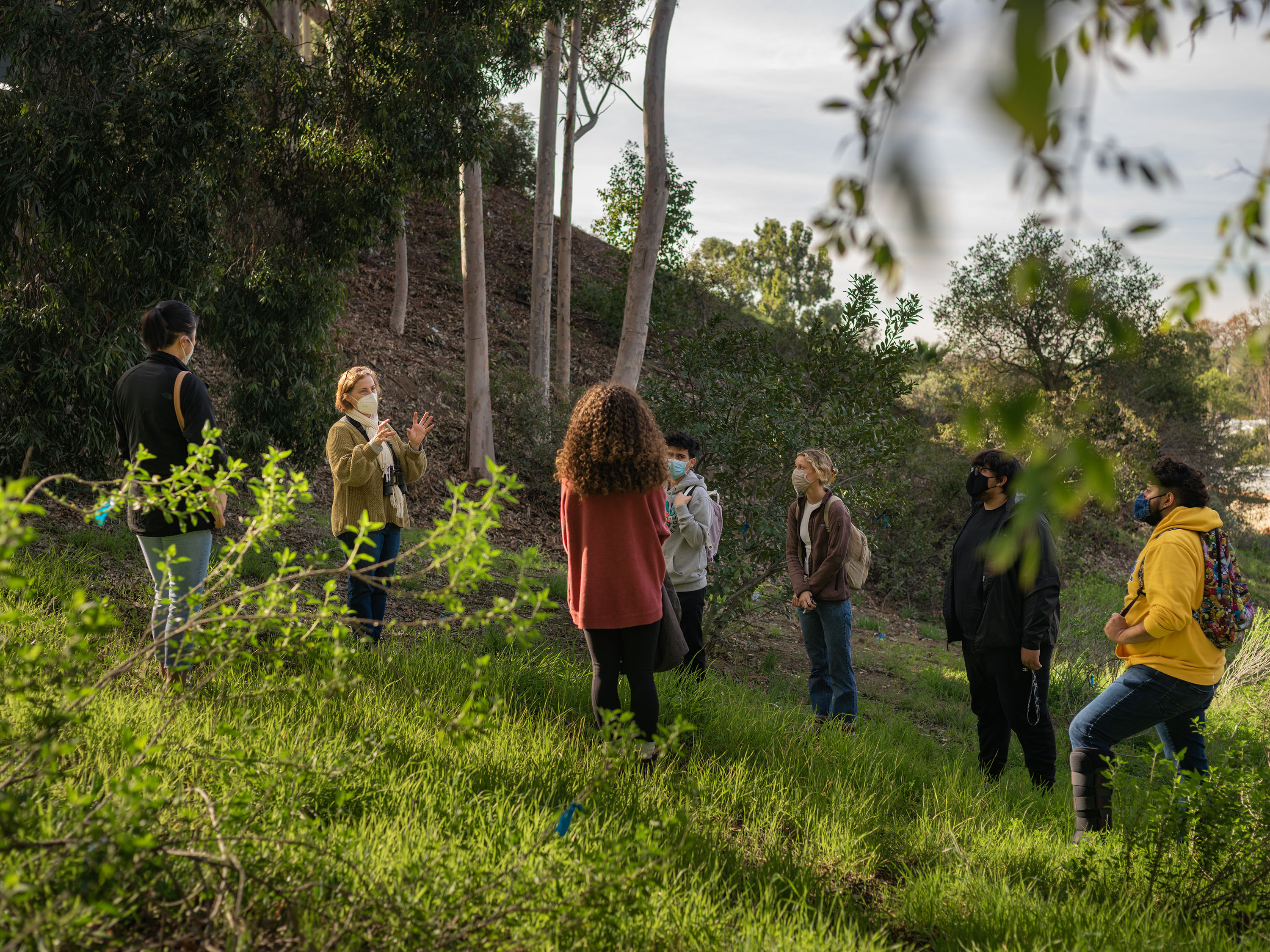 Sage Hill serves as a living laboratory for these environmental science students.

While Sage Hill has been used unofficially for teaching and research for years, its role as a living laboratory and nature classroom was formalized by the UCLA administration in support of the university's core mission. Faculty and students from various disciplines — including geography, ecology, archaeology, American Indian studies, film, arts and humanities — are working together to enhance the hillside’s value as a teaching and research resource.

The IoES is also partnering with representatives of the Gabrielino/Tongva community, the traditional land caretakers of Tovaangar (the Los Angeles basin), to incorporate their perspectives and develop ways to collaborate.

“It’s not a place that gets a lot of foot traffic. This is a hidden gem,” says J. Cully Nordby, associate director of the IoES, as she leads her practicum class around Sage Hill. “There’s a part of me that wonders whether we should be calling so much attention to it. But we should, because it’s such an incredible asset to the campus. It’s part of UCLA, and there’s no better way to honor this natural space.”

UCLA has long been recognized as a thriving habitat for flora and fauna. In 1947, Professor Loye Holmes Miller — the first instructor of biology at the Los Angeles State Normal School, and later a professor of zoology at UCLA — attempted to document campus wildlife.

An ornithologist, Miller identified more than 100 species of birds on campus. In the ensuing years, he also tracked the disappearance of species, including the horned lark and the prairie falcon.

A 1997 survey of Sage Hill by a geography class listed almost 30 bird species, along with nearly 50 native plant species, seven native mammal species, 17 species of butterflies, and several amphibians and reptiles. iNaturalist observers have so far logged sightings of 301 species, ranging from laurel sage to the Western fence lizard.

Today, a large sign created by one class stands at the bottom of the hill. It identifies some of the native plants and animals that call Sage Hill home: Among the former are California brittlebush, coastal live oaks and coastal sage; the latter residents include wood rats, black-bellied slender salamanders, southern alligator lizards and a red-tailed hawk.

The fight to hold on to this exceptional native ecosystem is very real to Gillespie, Nordby and other impassioned advocates for Sage Hill. Gillespie sees clearly where the battle lines can be drawn.

“This is the most noxious place,” Gillespie tells Nordby’s students. He points to a section filled with euphorbia and other invasive plants. “This just makes my eyes hurt. See this Chinese elm? I tried to get students to cut it down, but see how it’s resprouted? It’s like Medusa, with all its heads coming out. That, with an axe, is 15 days’ work.” 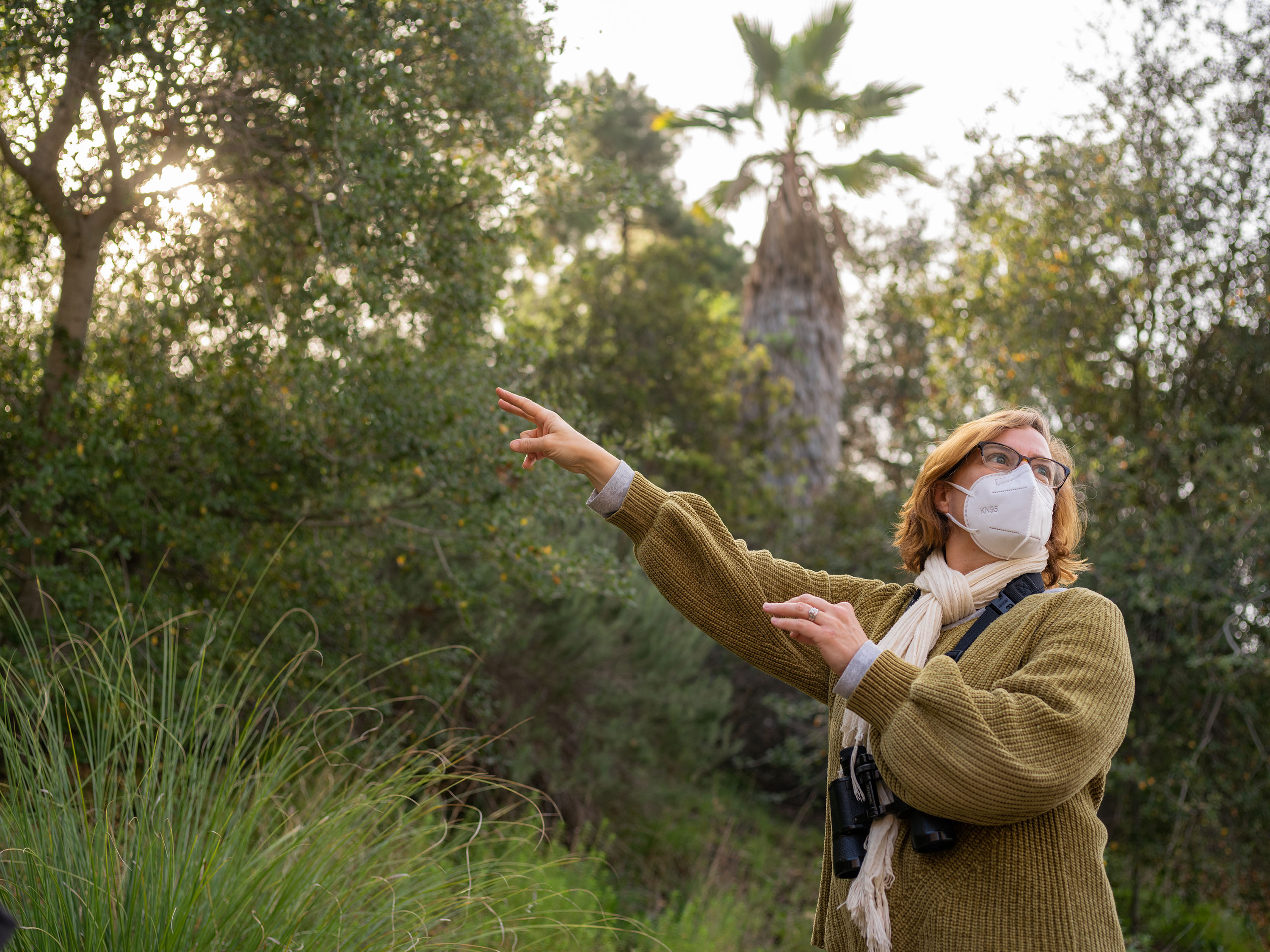 Gillespie grimaces at the sight of thick clumps of feathery pampas grass, with tall plumes bearing seed pods ready for release by the wind. The roots of the ornamental grass can drill down 30 feet and spread. Native grasses and cacti grow nearby.

In the dense brush, Gillespie shows students a wood rat’s den made of sticks and other scavenged materials. “He’s made this home to impress the female. It has ‘windows’ on the top. They also like shiny things. So, if you lose your dorm keys, they could end up here,” he says.

Currently, there are no plans to open up Sage Hill to the general public, though it’s possible that in the future there may be a seating area for classes, as well as a nursery where native plants are grown for transplanting.

But Sage Hill will always be “a special place where students can experience what the California native landscape is and how it makes them feel,” Nordby says. “When you’re here, you don’t feel like you’re at UCLA. You sense that you are away. And that’s incredible, especially in these times when having a connection to nature is so important.” 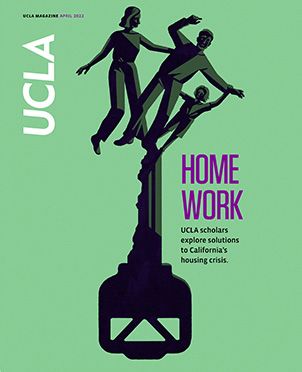