Carribean Fragoza ’03 is a true multihyphenate. An editor for the cultural journal Boom California and the online publication Vicious Ladies, she is also a journalist whose byline has appeared in Aperture, L.A. Weekly and the Los Angeles Review of Books. In addition, Fragoza, who majored in Chicana and Chicano studies and comparative literature, is an artist who co-founded the South El Monte Arts Posse, an interdisciplinary arts collective. Earlier this year, she released her debut short story collection, which the New York Times described as “a rare and significant achievement from a forceful new voice in American literature.” In all of her work, Fragoza, the daughter of Mexican immigrants and the mother of two daughters, presents historically unheard voices.

What do you hope readers take away from your work?

I look for untold stories from communities of color, particularly stories of women and girls, and find a new way of looking at the world through these stories. I try to look at mundane, ordinary life and find its frightening and beautiful qualities that speak to the complexity of relationships in families and communities. I want people to think about the complicated ideas and difficult emotions we experience in daily life. I hope readers can walk away looking at things from a new, fresh perspective and thinking more carefully about things they take for granted, like the stories of women and girls.

Your work often centers on feminism and on Chicana and Chicano identity. Why do you tackle these themes?

I consider myself a feminist and I identify as a Chicana, so those parts of my identity are very important to me. I’m definitely informed by them. But when I sit down to write, I’m not thinking strictly in terms of how I want to address those particular positions. I’m thinking more about voices that feel genuine, real and alive to me; I’m conveying experiences that feel necessary to tell. [I write] out of a visceral need to tell these stories and convey these voices. The complexities of feminism and Latinx identity definitely inform everything I do [and] everything I write, but when I’m writing fiction, they operate on a more intuitive than cerebral level.

What was one of the most important lessons you learned at UCLA?

I learned how important it is to apply the things you learn in the classroom to the world outside, whether it’s through organizing and activism or through literature. I’m fiercely committed to Chicana and Chicano studies, but how do you apply those lessons of history so that they’re not just these lofty ideals that get stored away on your bookshelves with all of your unused texts? How do you really embody them in your daily life and practice and your work in the world? I took a number of classes that really inspired me to get out there and build something new, which I’m always trying to do. Whether it’s through writing books, my arts collective or Vicious Ladies, it’s important [to me] to build new things with the lessons of the past in mind.

“We need to tell more of our stories, and I see a lot of writers of color doing really important work.” 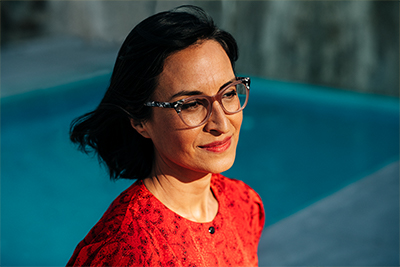 You have described the bilingual creative writing workshop at UCLA as “invaluable.” Why?

When I was at UCLA, I took some great courses in comparative literature and Chicana and Chicano studies. I took a writing workshop with Alicia Gaspar de Alba, who teaches Chicana and Chicano studies and is a fiction writer. I’ve always admired her. That workshop was the first time I had a set of attentive eyes that would see my stories and listen. I had the space and opportunity to write bilingually, and I was able to tell the stories of working-class Mexican women. It was a productive space. For me, as a young writer, it was super valuable.

I read that one of the stories in Eat the Mouth That Feeds You was written at UCLA. Which one?

It’s “Tortillas Burning,” which I started as an undergrad. I used to work at one of the campus diners alongside middle-aged Mexican women and listen to their stories. It was super educational on multiple levels. I was a young woman listening to their stories about their relationships, their experiences and their lives back in their home country. My sensibilities as a writer were informed by listening to the way they told their stories, to their sense of humor and to the rhythm of their language. The experience informed how I told stories of regular working women, which eventually became so important to me. I started writing “Tortillas” from just transcribing what I heard, and then I took it in my own direction through fiction.

In light of the recent increased awareness of racial injustice and efforts to increase diversity and representation, do you feel hopeful for change?

Last year really brought a lot of clarity on a large scale. For people of color, we’ve known that the systems as they operate currently are against us, have never favored us and have always worked toward our detriment. It’s become more clear that things need to change, and all of this racialized discussion on a national scale gives me a lot of hope. I feel very heartened and strengthened when I see literature, art and other spaces pushing along efforts and action for change. I certainly align myself with that change, and I see my book as being part of that change. It’s important to shift narratives and the way we tell our stories. We need to tell more of our stories, and I see a lot of writers of color doing really important work. I feel very proud to be publishing a book in this moment and hopefully contributing to that change-making.