Initial plans for the Smithsonian National Museum of African American History and Culture (NMAAHC) in Washington, D.C., did not include a gallery dedicated to sports. Then Damion Thomas ’96, M.A. ’99, Ph.D. ’02 joined the project as guest curator.

Thomas, then an assistant professor in the School of Public Health at the University of Maryland, presented museum leaders with a vision of how sports would complement the stories chronicled in the museum — the largest dedicated exclusively to the African American experience. Lured by the opportunity to engage audiences on the big political, social and cultural issues of U.S. history through sports, Thomas came aboard full time before the museum’s 2016 opening. As the museum curator of the sports gallery, one of NMAAHC’s 12 inaugural exhibitions, Thomas encourages visitors to think critically about the history and future of race relations in America.

How did you fall in love with sports ?

Sports are a conversation starter. I was raised by my grandparents, and some of the most incredible conversations I had with my grandfather were about sports. Going to USC football games was one of the things that we did fairly regularly, and it was just good bonding time between us.

For me, sports were also a bridge-builder. One of the most significant things I did as a youth was play high school volleyball, because most of the players on the team were white. I learned so much from them, and hopefully they learned some things from me, but being a part of this interracial team was something I benefited from tremendously. That might be the most significant sporting opportunity I was able to take advantage of, because it transformed how I saw society.

Do you have a favorite historical event that you’ve come across in your work?

It’s been an amazing journey. I spent 20 years studying this history, but there are still new things that I learn. One of the most interesting things I’ve learned since I came to the museum is about Alfred “Tup” Holmes, a golfer who sued so that he could play on the Bobby Jones Golf Course in Atlanta, which was a public course. In 1954, his case was heard at the federal district level. His case is significant because it quickly followed Brown v. Board of Education which two months earlier had outlawed segregation in schools.

“Boxing has a really important role in African American history, because race is often at the core of the most historically significant fights.”

The following year, in 1955, Holmes’ case also went to the U.S. Supreme Court, and he won. So in Atlanta, the first publicly integrated space was a golf course, not a school. That story is an entryway into some of the larger conversations about municipal social spaces: swimming pools, tennis courts, golf courses. That’s an important battleground of the civil rights movement that often gets underexplored. 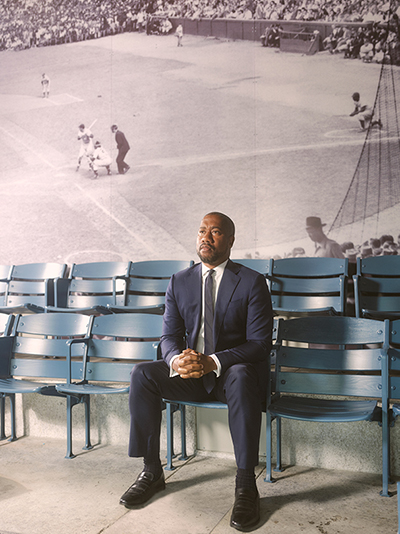 What role do historical objects play in your work in the sports gallery?

One of my favorite artifacts in the gallery is a nondescript basketball — a Denkert basketball from the late 1930s — that has laces like a football. An object like that is important, because most people have never seen a basketball with laces. You hope that someone seeing that then realizes how much they don’t know and becomes open to exploring history from different perspectives.

How has the legacy of slavery shaped the history of American sports?

When I was curating the gallery, it was important to me that we demonstrate how sports have impacted many eras of history. We begin in slavery, where two prominent sports were horse racing and boxing.

In the case of horse racing, enslaved African Americans in South Carolina and Virginia were in charge of grooming horses and being jockeys. If you go back to the first Kentucky Derby, African Americans were 13 of the 15 riders. These careers in jockeying and horse training highlight an aspect of slavery we don’t often think about — this whole section of skilled artisans and professionals goes unacknowledged — the horse trainers, jockeys, ironworkers, artists who created paintings; Frederick Douglass himself was once a ship caulker.

Boxing has a really important role in African American history, because race is often at the core of the most historically significant fights. The first African American to fight for the heavyweight title was Tom Molineaux in 1810, a former slave who had earned enough money boxing to gain his freedom. Boxing has often pitted racial groups against each other and held a larger-than-life importance. If you go back to the [1910] fight between Jack Johnson and Jim Jeffries in Australia for the heavyweight championship — “the fight of the century” — an African American [Johnson] wins, and there are race riots all across the country.

What impact could the 2028 Summer Olympic Games in L.A. have on the city?

The 1984 Olympic Games [in Los Angeles] were the first Olympic Summer Games since 1932 that were profitable. There had been a time after the ’76 Games when people thought the Olympics would end, because it cost a lot of money to cities that were going through some financial difficulties. The ’84 Games proved profitable and demonstrated that you could use the Olympic Games as a vehicle for infrastructure-building. It’s going to be interesting to see how L.A. is transformed by the upcoming games.

In the exhibition, you spotlight figures like Bruins Jackie Robinson and Rafer Johnson ’59. What part has UCLA played in African American history through sports?

UCLA had African American student-athletes in the 1920s and 1930s. It has fostered some of the most important athletes who have transcended the world of sports — certainly Jackie Robinson, Arthur Ashe [’66], Kareem Abdul-Jabbar [’69] and Rafer Johnson. It has produced some of the most thoughtful and socially engaged athletes — that’s undeniable. It has an important legacy.