In 2004, the Boston Red Sox trailed their archrivals, the New York Yankees, three games to none in the American League Championship Series. No team had ever come back from that kind of deficit, and now — down a run heading into the ninth inning of Game 4 — a potential Sox comeback meant overcoming New York’s legendary closer Mariano Rivera, as well as the weight of an 86-year World Series drought. Boston’s Kevin Millar led off the ninth with a walk.

Sent in to run for Millar, Roberts represented the tying run. Rivera tried to hold him close to the bag with three straight throws to first. When he finally delivered a pitch, Roberts broke for second, beating Jorge Posada’s throw to Derek Jeter. Now and forever known as “The Steal,” Roberts’ bold base running defibrillated Red Sox Nation’s flatlining hopes and jump-started a rally that saw him scoring on Bill Mueller’s game-tying single. The Red Sox won Game 4 in 12 innings, took the next three from New York, then went on to beat St. Louis in the World Series.

Fast-forward to 2015. When the Dodgers decided to replace manager Don Mattingly during the off-season, they sought a strong and experienced leader, an energetic presence who could connect with players and whose teams would do the little things to win — like steal a base in the bottom of the ninth with the season on the line.

Roberts’ appointment as Mattingly’s successor made its own kind of history, as the franchise that made Bruin Jackie Robinson the first black player in major league baseball hired its first minority manager. Roberts’ father is of African-American descent; his mother is Japanese.

“We moved all over as children, my sister and I, so we were around a lot of diverse people. I didn’t relate to ethnicity too much. I knew who I was, but I didn’t identify with either,” says Roberts. “As I was going through the process [of becoming L.A.’s manager], it really hit me. My father made note of it, me being the first minority manager for the Dodgers, an organization that’s storied for breaking racial barriers. It was really heavy.”

Press coverage of Roberts’ hiring focused on the Robinson-Roberts connection. The new skipper recognizes that his background links him to a cross-section of Dodger fans on both sides of the Pacific.

“For me to be the first Japanese manager for the Dodgers, I think there’s a lot of excitement over there. I’ve talked to relatives and know how excited [Japanese fans] are, and now that we’ve signed [Japanese pitcher] Kenta Maeda, the energy and excitement for Japanese culture and the Dodgers continues to build,” says Roberts, a one-time Dodger teammate of pitcher Hideo Nomo.

“And speaking to the African-American side, to be the first African-American manager as well, it’s kind of multilayered for me. I’m friends with [Robinson’s daughter] Sharon and people who played with Jackie, like Don Newcombe. I played at Jackie Robinson Stadium. I played for UCLA and the Dodgers and was a multisport athlete. On the road, my alias is Jackie Robinson,” says Roberts. “He’s somebody that I have so much adoration for, and it’s fascinating to see the African-American culture relate, and the Japanese culture relate, and the UCLA faithful relate. So all these different people, along with people from my hometown, think it’s special that I can fill this position, and so many different people can live through me.”

Roberts spent the last five seasons as a coach with the San Diego Padres. When the Padres decided they needed a new manager and he realized he wasn’t a candidate, Roberts told the team he would not return in any capacity. He became a finalist for the Seattle Mariners manager’s job, and though that didn’t happen, Roberts realized he definitely wanted to manage somewhere. According to press reports, the Dodgers considered a number of candidates before eventually making Roberts their choice.

At his inaugural press conference as manager, Roberts used words like “grit” and “grind” when describing what he looked for in a team and its players. These are old-school baseball terms, intangible qualities coated in infield dirt that seem almost in opposition to the clean and unemotional analytics pervasive in the game today — the cold, hard stats that drive decision-making in an approach favored by the Dodgers’ president of baseball operations, Andrew Friedman, and general manager Farhan Zaidi. Roberts sees no inconsistency.

Believing that “baseball is a game of failure,” Roberts says that players with grit are those who maintain focus, ignore negativity and recover quickly when things don’t go their way. “Ultimately, the goal is to win or produce a certain amount statistically. But at the core, if you’re focused on being accountable to yourself, I think that the grinding mentality — the head-down, blue-collar mentality — goes along with the metrics,” says Roberts.

Eric Karros ’93 has a unique perspective on the hire. As a fellow Bruin and one-time Dodger teammate, he’s naturally rooting for Roberts to succeed. As a broadcaster who calls games for Fox Sports, he brings the objectivity required of an expert analyst. “From the outside looking in, as an analyst, I would say it’s a good hire. Maybe not a conventional one for a veteran team, but one that you can understand, given the structure of the front office, the philosophy, those sorts of things. It makes sense,” says Karros, citing the history of Friedman, who hired Joe Maddon to manage Tampa Bay. Maddon was another candidate with a winning personality, but little managerial experience.

“Looking at it as somebody who played in the organization and has a pretty good sense of things there, you look at the lineage. You go to Walter Alston and Tommy Lasorda, those are the guys who stand out when you talk about [Dodger managers], and maybe Dave Roberts can be that next guy. Those were two iconic managers, Hall of Fame guys, but on the flip side, neither one of those guys had managing experience at the big-league level prior to taking the Dodgers,” Karros says. “There are going to be some challenges, and I think that’s probably what appealed to management. He’s always been a guy who’s had to earn everything at every level. He’s been given nothing and has always accepted challenges and done well, whether it’s on the field or off.” 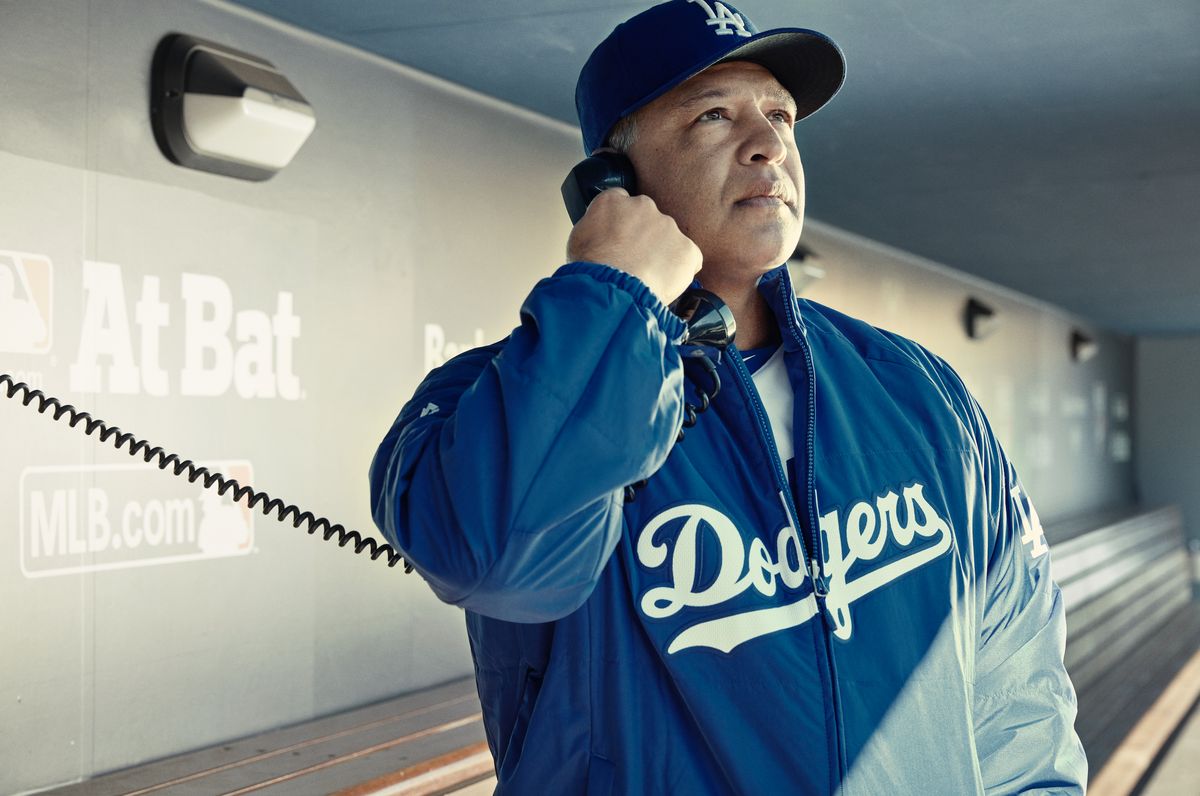 Roberts’ approach to managing the day-to-day machinations of a baseball team starts with acknowledging the sheer length of Major League Baseball’s 162-game season. As much as anywhere else, this is where the “grind” comes in.

“I’m an emotional person by nature, but I think that as a manager, given the ups and downs, the ebbs and flows of a major league baseball game, let alone a season, I’ll try to keep things somewhere in the middle,” Roberts says. “I’m definitely going to show some emotion. But I think people watching the Dodgers, they’re going to see a group that leaves it out there every single night, and you’re going to appreciate the way the team plays and respects the game of baseball. That’s the way I played the game, and that’s the way I feel the game should be played.”

These are the qualities that the Dodgers front office brain trust sought when selecting a manager. “We could not be more excited about Dave,” says Dodgers President and part owner Stan Kasten. “He’s going to bring not just expertise, but a real passion and real enthusiasm to his job, and I think the coaches he has assembled will feed off that. We expect to have a very positive, very energetic, very enthusiastic environment throughout our staff and players.”

Roberts almost didn’t play for UCLA. The son of a Marine, he had an appointment to the Air Force Academy but decided he wanted a “regular” college experience. Late in the summer after high school graduation, one of his coaches took him to a few different schools to meet with baseball coaches. UCLA Head Coach Gary Adams ’62, M.S. ’64 had no scholarships left to give, but he offered Roberts a spot as a walk-on. Roberts says he decided that, at worst, “I’d have a great education from UCLA.” He ultimately earned a history degree.

“I think that the number one thing I’ll take from Coach Adams — and I’ve taken it with me as a player, as a coach, and I will continue to do so as a manager — is that he cared about his players,” says Roberts. “He was invested in us, and he was a teacher. And so I think, for me, the caring for my players and the will and desire to teach to get these guys better, I take from Coach Adams.”

Karros believes Roberts’ positive people skills, as opposed to any strategic approach to the game, will be critical. “Dave is a personable guy, a team guy. His best strength is that he can coexist with anybody,” says Karros. “When you get into managing nowadays, the X’s and O’s, while important, are probably not as important as they once were — those can be done by a lot of different people with interpreting numbers. It’s more of a managing of personalities. With Dave, you’re not going to hear anyone say anything bad about him, and I think that his ability to endear himself to others may be one of the qualities that appealed most to the Dodgers’ management.”

One of the things that appeals to Roberts about returning to Los Angeles is his proximity to the campus he once called home. It gives him a chance to pay closer attention to the UCLA program.

“Coach [John] Savage and his staff have done an outstanding job of developing very good college players and one of the best programs in the country, while also developing great young men,” says Roberts. “I haven’t spent a lot of time with him, but I’m hopeful that now that I’ll be in Los Angeles, we can share some more time together.”

Jackie Robinson, the quintessential Bruin-Dodger who broke Major League Baseball’s color barrier, has been honored with more statues than any other ballplayer. There are currently seven such statues in the United States, including the one at the UCLA baseball stadium that bears Robinson’s name.

Now, the Los Angeles Dodgers have selected sculptor Branly Cadet to create the eighth Jackie Robinson statue, to be unveiled during the 2016 season. Fittingly, it will be the first statue erected at Dodger Stadium.

“We had the [2015] Civil Rights Game [at Dodger Stadium], and [a statue honoring Jackie Robinson] was something on Mark Walter’s mind,” says Dodgers President and CEO Stan Kasten, referring to the team’s chairman. “He talked it over with me and said, ‘Let’s go ahead,’ and we were off and running.”

“We have a great relationship with Rachel ’42 [Robinson’s wife] and Sharon [the couple’s daughter] and the whole family, as well as with the Jackie Robinson Foundation. We worked closely with the foundation and the family in making our selection, and we found someone who is really outstanding,” Kasten says. “Branly has done sports things in the past and has done wonderful, monumental statues, big civic projects. He’s also demonstrated a real love and a real passion for this particular subject.”

The Dodgers’ statue of Jackie Robinson will be approximately 9 to 10 feet tall. Once completed, it will be unveiled at Dodger Stadium in a location to be determined. — P. F. ’85