In 2012, Refik Anadol M.F.A. ’14 flew from Istanbul to Los Angeles, rented a car at 2 a.m., put his luggage in the trunk and drove downtown, where 25 minutes of multilane freeway gave way to tall glass skyscrapers. Anadol slowly turned right onto Hope Street, approaching one of the world’s most striking and important works of architecture. The lights had gone out for the night, but Frank Gehry’s Walt Disney Concert Hall felt alive, its stainless-steel curves casting the illusion of movement like a ship’s sails in the wind. Gehry’s opus inspired Anadol. “I was sure then that I wanted to projection-map this building,” he recalls.

Born in Turkey, Anadol comes from a line of teachers. “Learning to learn is my family practice,” he says. He had just arrived for his first year at UCLA’s Design Media Arts graduate program, full of that curiosity, and among the things he hoped to learn was “how to reach Frank Gehry.”

Back then, Anadol’s art practice had neither name nor audience. “I’m pretty sure I coined the term ‘data painting’ in 2008,” he says. “People used to laugh when I said, ‘I want to let buildings dream.’”

At UCLA, nobody laughed. The DMA program was established in the UCLA School of the Arts and Architecture in 2000 to “fully embrace the desktop revolution,” says Peter Lunenfeld Ph.D. ’94, vice chair of the department and a member of the digital humanities department faculty. “We give students the tool set and range of vision to not only solve problems, but pose their own problems as well.”

DMA welcomes audacious and genre-defying artists not only as students, but also as faculty. Among the faculty are Casey Reas, co-founder of Processing, a programming language used by artists worldwide; Lauren Lee McCarthy M.F.A. ’11, a former student of Reas’ whose art includes transforming herself into an “Alexa-like” smart system; and Victoria Vesna, who recently partnered with UCLA neuroscientist Mark Cohen to create a participatory artwork titled Octopus BrainStorming, in which participants communicated (and dressed up) like octopuses, silently changing shape and color. Meanwhile, graduate student Maya Man exemplifies DMA’s continued innovations, creating artworks that reconstruct the relationship between laptop and user in startling new ways. 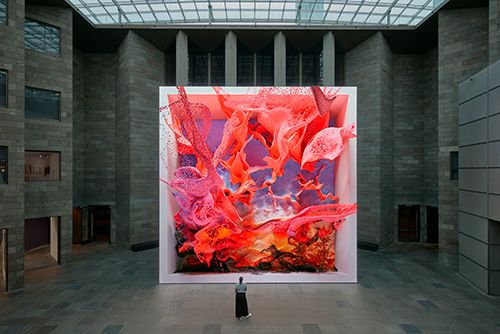 Anadol says the program has created “a community like nowhere else.” From Reas, he learned “more about data painting and sculpture, from [department chair] Christian Moeller about the future of public art, from [Professor] Rebeca Méndez about design and philosophy of design.” As he says: “The support of these incredible pioneers helped me grow and understand my medium.” And Anadol’s works have transformed millions of others’ conceptions of what is art.

His exhibitions draw hourslong queues, as in Berlin last year, when König Galerie — located in a renovated church — welcomed more than 200,000 visitors in six weeks to see his work, including Winds of Berlin. The architectural-scale data sculpture was composed of real-time weather data collected from Berlin’s wind sensors, synthesized into pigment and projected as an abstraction of Berlin’s colors and movements onto the gallery’s outdoor St. Agnes Tower. Against a soundtrack of city noise, vibrant colors continually swim across the tower, changing with each blink of the viewer’s eye. This is Anadol’s artistic answer to what a city sees in its dreams: a hallucination of its history and makeup.

Anadol’s belief in that enormous ambition is itself a form of art, one that has earned him recognition from those redefining the intersection of art and technology. Anadol is the recipient of the Microsoft Research Best Vision Award and of Google’s Art and Machine Intelligence Artist Residency Award. Now a visiting lecturer in the department, Anadol helps shape the artists of the future by telling his students: “A success story is going from dream to real, in any scale. The software or hardware you use doesn’t matter as much as your idea and ability to use multidisciplinary thinking.” Which is to say, Anadol eventually convinced Frank Gehry.

“The ultimate dream is to help heal the mind through the experience of art.”

For a 2014 concert of Edgard Varèse’s Amériques, Anadol filled Gehry’s iconic Walt Disney Concert Hall with site-specific visual accompaniment, composed by a custom-built sound analysis algorithm responding to music in real time. He also captured conductor Esa-Pekka Salonen’s movements, influencing the light projection. Like a concert, Anadol’s art can be explained technically, or it can simply be felt.

Anadol recently partnered with neuroscience researchers to examine such feelings. Today, three UCLA clinics study the impact of his artworks on anxiety and depression. Anadol believes a symbiotic relationship among art, architecture, neuroscience and tech can quantifiably help people. “The ultimate dream,” he says, “is to help heal the mind through the experience of art.”

A Focus on Life

Lauren Lee McCarthy, a 2011 M.F.A. graduate and now an associate professor in the department, also merges her computer science background with questions about the human experience. While at DMA, McCarthy took psychology courses, and this confluence appears in award-winning work such as the LAUREN series, ongoing since 2017. In it, McCarthy replaces artificial intelligence with human intelligence. For the series piece SOMEONE, for instance, McCarthy rigged four U.S. homes with custom-designed smart devices, controlled by random visitors at a New York art gallery.

Subverting virtual assistants like Alexa, McCarthy removes the camouflage of convenience (gallery-goers, it turns out, are less reliable than AI) to uncover a surprising desire for companionship. Her participants immediately accept the nuisance of an unreliable system, engaging with SOMEONE like an annoying housemate rather than an intruder. In one documented scenario, a friend knocks on a participant’s door and walks into a dark apartment. The host explains, matter-of-factly: “I’m cooking in the dark because SOMEONE won’t turn the light on!”

“Artists are really good at imagining what hasn’t happened yet and what doesn’t seem possible.”

McCarthy’s work demonstrates how fluent humans are in prevalent modes of technology, even if unknowingly. Code is McCarthy’s medium, but her focus is life. She believes that “every software system is also a social system,” and she asks: “How do we reclaim a feeling of control? How do we participate?”

As a teacher, McCarthy aims to make participation easier in tangible ways. She created p5.js, an open-source art and education platform for learning code, prioritizing access and diversity. “I saw so few women and women of color involved in the creative coding field, I wanted to make a space where everyone felt welcome,” she says. Today, p5.js has more than 1.5 million users.

She carries these ideals into her studio practice. Though celebrated in the gallery world, McCarthy detours around its white walls and considers the internet her primary arena.

“Artists are really good at imagining what hasn’t happened yet and what doesn’t seem possible,” McCarthy says. “That’s why I advocate having artists at the table in any kind of development of technology or the sciences. Artists make people aware of questions they haven’t yet addressed.” 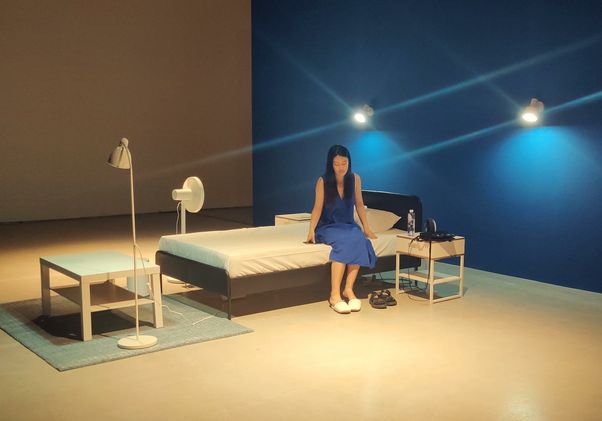 Courtesy of Lauren Lee McCarthy
In the LAUREN series, artificial intelligence is replaced with human intelligence.

Artist Maya Man, now a graduate student at DMA, had one such question. For years, she wondered whether her life’s passions — computer science and dance — were irreconcilable. A chance introduction to McCarthy and joining p5.js gave her the answer. “p5.js allowed me to integrate coding with movement,” Man says. “I was planning to be a software engineer, but I realized what I really wanted to be was an artist.”

At DMA, software is respected as an artistic medium, says Man, and her greatest motivation is working with McCarthy and Reas, whom she calls “pioneers and inspirations.” Like the artists she admires, Man uses a medium explicitly of our time — code — to examine timeless complexities. Her dance background informs her interests in human performance, and she complements her DMA education with UCLA classes in film and choreography. Man cites 20th-century sociologist Erving Goffman’s book The Presentation of Self in Everyday Life as an influence. Goffman studied how people “perform differently in different contexts,” Man says. “This relates to how I see us performing on the internet now.”

This kind of provocation is part of the learning credo at DMA. 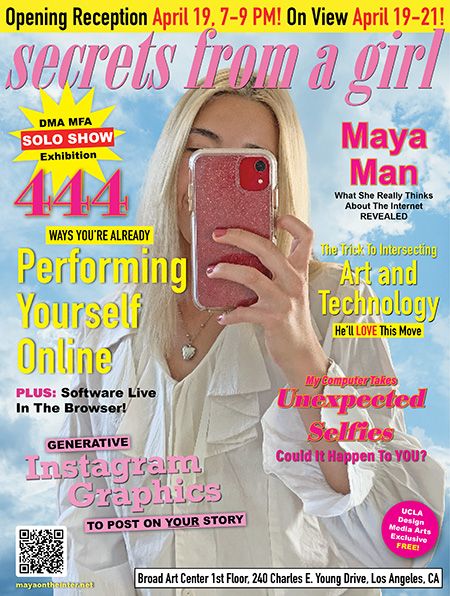 “We’re teaching students to think about the ideology behind tools, to challenge tools and develop some of their own,” Lunenfeld says.

Reas challenges the notion of software as a “new” tool altogether.

“Artists have been working with software for 60 years,” he says, but even in the early 2000s “it was seen as something ‘other,’ and larger arts communities were not engaging with it.” Reas’ work pioneered and helped legitimize software as an art medium. At the Whitney Museum in 2016, his piece Software Structures was displayed next to a Sol LeWitt work, expanding the definition of conceptual art. “That’s the kind of context I’m interested in,” Reas says.

Among artists using software, Reas is a legend. In 2001, he co-founded Processing, a free, open-source platform designed for artists of any coding level. “Before Processing, if you were an artist wanting to learn how to code, you would likely suffer through a few semesters of mathematics exercises at a computer science department before you could make anything visual,” explains Reas, who joined the DMA faculty in 2003. Processing has opened a universe of new horizons for artists.

Even though in 2013, Reas sold the first-ever work (Americans!) made using Processing at the New York auction house Phillips, a respected museum recently was unable to credit his medium as software, opting (incorrectly) for video. “It just wasn’t in their taxonomy,” Reas says. Among his objectives, therefore, is “to break open the medium’s opacity.”

He’s seeing movement in that direction. “Today, there are internal teams in the field of technology-inspired work at the Tate, Guggenheim and MoMA — that’s definitely a change from 20 years ago.” Art is an elastic field, which Reas helps stretch across new definitions and iterations. McCarthy’s p5.js bills itself as “an interpretation of Processing for today’s web,” and artists across genres, including all those interviewed for this piece, cite Reas’ artworks and open-source philosophies as inspiration.

In addition to his private studio practice, Reas continues creating public platforms that evolve with artforms. During the pandemic, he created Feral File, an online space for group exhibitions. “Everything on Feral File begins with a curator,” he says. “It’s a traditional gallery model, but radical in the sense that the work is always online for anybody to visit, and made to run in its complete form inside the browser — it’s not a preview or a watermarked image, but the work itself.” 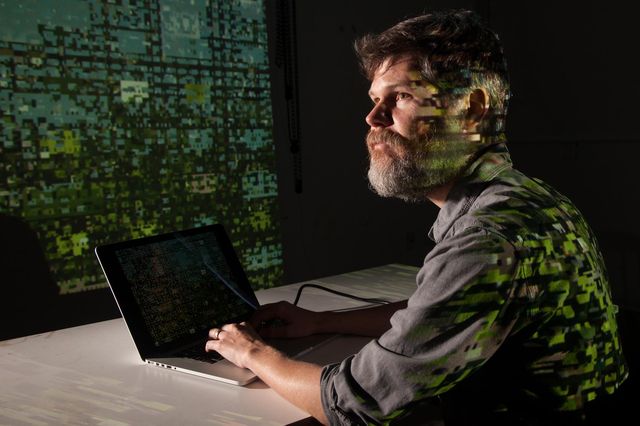 Ownership fits within existing art market rules. “If you want to bring a work into your life, you collect it from Feral File and gain a set of standard rights, including the ability to exhibit the work,” Reas explains. But unlike the traditional art market, Feral File was also made for artists to share with each other.

“One of my frustrations with the gallery system is that I can’t afford to collect my own art or artwork of artists I admire,” Reas says. That’s why for each Feral File group exhibition, the artists swap works with each other, “engaging outside the commercial realm.”

Reas is so dedicated to art’s communal importance that, notably, he removed his own name from Feral File’s “About” page. “I want it to be much more than about me,” he says. Exemplifying what he teaches students at DMA, he wants to contribute to the greater evolution and social resonance of art.