All UCLA students possess a certain set of traits — among them curiosity, optimism, drive, compassion, creativity and a deep desire to improve the world around them. But beyond this, Bruins are remarkably different from one another, coming from all over California, the rest of the nation and the world, and representing a broad spectrum of races and ethnicities, interests, ideologies, gender identities, sexual orientations, socioeconomic statuses, religious beliefs and other qualities.

The cover feature in this issue of UCLA Magazine brings this to life in vivid detail. It looks at eight Bruins in our incoming class, recounting their stories leading up to the moments in which they received their notices of admission to UCLA. Taken individually, each one is a stirring and powerful portrait. Taken together, they say a great deal about the wonderfully varied experiences and perspectives that our students bring to Westwood.

“In the past two years, UCLA has admitted the most diverse and most academically accomplished classes in its 103-year history.”

Indeed, UCLA’s diversity — which is exceptional among top public universities and unrivaled among our private peers — is one of its greatest strengths. New students quickly find that interacting with, debating, learning from, and growing alongside those who are different from them stretches them intellectually and emotionally. It develops their capacity for empathy, exposes them to new ways of thinking and being, and prepares them to thrive in a multicultural and increasingly globalized world. I am deeply proud that in the past two years, UCLA has admitted the most diverse and most academically accomplished classes in its 103-year history. Of course, there remains more we can do to expand access and make our campus welcoming and inclusive for all.

While having a diverse student body is critical to the success of our academic enterprise, so too is having a diverse faculty. Studies have shown that students who come from backgrounds historically underrepresented in higher education achieve greater success when they have instructors within their disciplines who look like them or identify with their experiences. Having professors from a variety of backgrounds also broadens the types of research subjects our scholars take up, the lenses through which they view problems and ultimately the ideas they propose for addressing them. These are just a few of the reasons that our university is investing heavily in growing its faculty — aiming to add 125 new positions across the campus over the next five to 10 years — with a specific focus on academic excellence, mentorship and diversity.

UCLA was founded on the belief that a state and nation would thrive if all people — not just the privileged — had access to the opportunities for intellectual growth and personal empowerment that come with a college education. This idea proved true beyond a shadow of a doubt. And as the rich diversity of our campus community illustrates, the commitment is one that continues to animate our university to this day. 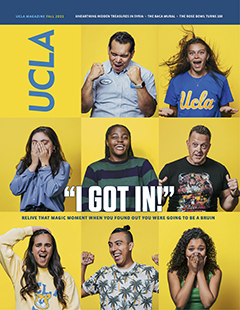