The sophisticated, meticulously designed, cheerfully wacky drawings of illustrator Greg Clarke ’82 have graced numerous publications, notably The New Yorker, The Atlantic and Rolling Stone. Clarke has also illustrated a number of books, including A Sidecar Named Desire: Great Writers and the Booze That Stirred Them, a compendium of fascinating facts about the preferred libations of writers from Aristophanes to Maya Angelou. A native Californian, he has received three silver medals from the Society of Illustrators, the nation’s oldest nonprofit organization dedicated to the art of illustration.

Did you draw a lot as a child, and did your parents support your interest in art?

Yes. My parents were very good about [encouraging that] very early on. My father had wanted to be an artist, but his parents steered him away from a life of insecurity, and he went into physics and engineering — but he had an incredible drawing skill set. He provided me with drawing materials as soon as I could hold something to draw with. He also barred coloring books from the household, because he thought it would impinge upon the creativity of his kids. And, of course, we didn’t have the siren call of screens back then, so in any downtime, that’s what I did.

You were going to major in film at UCLA but then switched to fine arts. Why?

You had to enter UCLA undeclared and then apply to the film program at the end of sophomore year. I wasn’t able to take any film courses [before then] other than a foreign film appreciation class, so I ended up taking a lot of art electives. It was kind of my fallback, but I was still thinking film was the way I wanted to go. Jan Stussy [’44] and William Brice were my 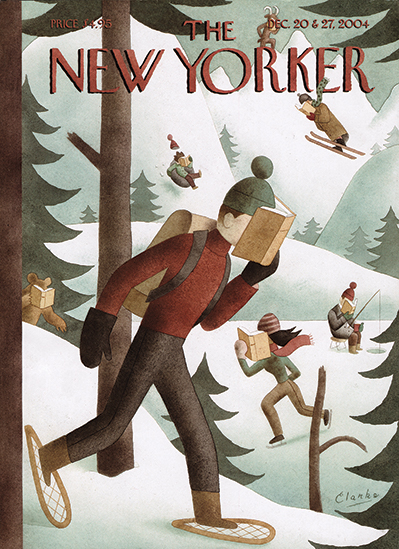 Greg Clarke
Cover illustration for an issue of The New Yorker

two favorite instructors. They were from the old guard and were more traditional artists. I took some of their drawing classes and really enjoyed them, and I got a lot of positive feedback from them. When the time came for me to apply to the film program, I made the decision to switch to art.

How did UCLA influence your career plans?

I knew fine art was going to be a really tough road, and I was also looking at illustrators. When I started working for ASUCLA [Associated Students UCLA], I did layouts and illustrations for ads. That was my first real exposure to the so-called applied arts, and it prompted me to start investigating illustrators and graphic designers. I discovered the New Yorker cover artists, whom I fell in love with — guys like R.O. Blechman, [Jean-Jacques] Sempé, Saul Steinberg and William Steig. I thought, “This is more in keeping with my sensibilities, and this is what I want to do.” And that was kind of an awakening for me.

Around that time, I met some students who had a big impact on what road I’d take after college. One of them was Gary Baseman [’82]. He was a communication studies major, but he was also a compulsive drawer — he carried a sketchbook wherever he went. He and I instantly bonded, because he also loved the New Yorker guys. And at the end of my senior year, I met Mark Fox [’85]. He was in the art department but wanted to be a graphic designer. He opened my eyes to the possibilities in graphic design. The three of us became pretty good friends, and through cross-pollination, we influenced each other. We’re still in touch.

What was your path after UCLA?

My first job after graduating was working in the bullpen of an L.A. ad agency called Diener Hauser Bates. I started as a gofer — ordering art supplies, making coffee and running errands — and then the art department started letting me kick in concept sketches on various projects. I had no formal academic training as a designer, but they eventually gave me an office and the official title of art director. 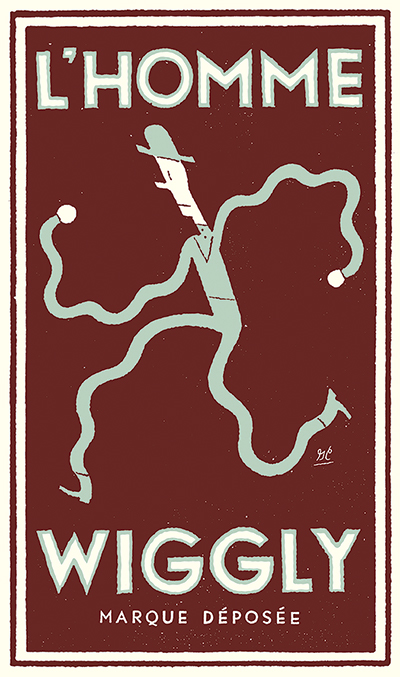 My next stop was working as a graphic designer for the L.A. firm Josh Freeman Associates, while simultaneously working on my illustration portfolio. I took some trips to New York City to show work, and slowly but surely jobs started coming in, eventually allowing me to quit my full-time job.

Your illustrations have a gentle, relaxing look, but there’s all this wild stuff going on as well. How did you develop your style?

I guess it’s a reflection of my personality. I’m a pretty low-key, introverted person. A lot of my characters are sort of introspective, contemplative people, lost in a book or a pair of headphones. And there’s always been this tension in my work between wanting to be loose and spontaneous and wanting to be tight and controlled. It’s a constant battle.

Tell me about your well-known piece “L’Homme Wiggly,” or “Wiggly Man.”

“Wiggly Man” came about as a limited-edition silkscreen poster that I did for a show in the early ’90s. Around that time, I’d been playing, in doodles, with this anxious character with undulating limbs, and he just seemed like a good subject for a poster.

I’ve always been something of a Francophile, so I wanted to create something reminiscent of the French poster styles from the 1930s. I thought the name “L’Homme Wiggly” was more glamorous and perhaps pretentious — in French, everything is more humorous and pretentious.

After that, people started calling me Wiggly Man, and for years, I called my graphic design studio Wiggly Man Brand Studios. Years later, I saw a photo in an article about Nicholas Blechman, R.O. Blechman’s son and currently creative director at The New Yorker. The “L’Homme Wiggly” poster was on the wall above his couch. After that article came out, I got a lot of inquiries and sold the rest of the print run within a month. I’ve since created a digital print-on-demand version.

Talk about your most recent book, A Sidecar Named Desire.

Monte Beauchamp, my co-author, is an editor, art director, graphic designer and kind of an idea packager. Monte and I both love writers and “the cocktail arts.” He pitched me this idea: “What if we do a book on this together?” Of course I was down with that! Initially, we pitched it as a book about alcohol as used by creators in many disciplines — musicians and fine artists as well as writers. Thankfully, the publisher [HarperCollins] said, “You need to narrow the focus on this.” Monte and I did the research and the writing together, and I did the drawings — there were 300 — and the layout. Those six months working on the book nearly killed me! 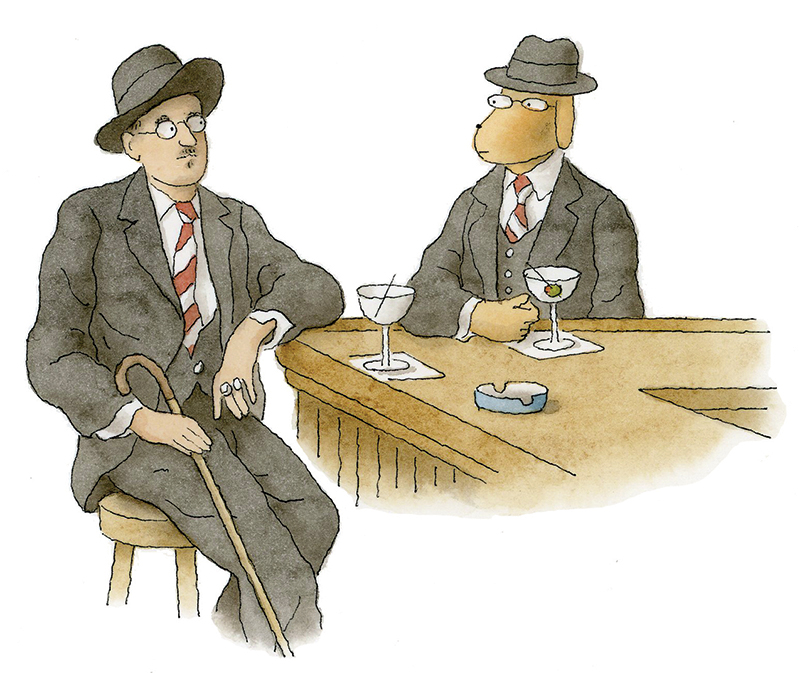 Greg Clarke
From A Sidecar Named Desire, illustration of James Joyce and Boozehound

Your work has a timeless charm that would have been as much at home in the 1920s as in the 2020s. Would you have wanted to live back then?

With all your success, do you still feel the need to market your work?

Yes, even now. There are too many illustrators in a shrinking job market. I don’t advertise in the directories anymore. Now I use social media and my website, and I do targeted email promotions, so I manage to stay busy enough. I’m still subject to cycles of no work and too much work — it’s rare there’s a happy medium. And the long-standing axiom in illustration circles is that if you want work, plan a vacation. They always call the day you’re leaving.