Last April, Essence magazine’s Girls United platform posted a digital cover story that featured four young African American women, dressed in shiny, jewel-toned outfits and sporting glamorous hair and makeup. They may have looked like models, but they were actually members of the 2021 UCLA gymnastics team: Chae Campbell, Nia Dennis, Margzetta Frazier and Sekai Wright. The headline declared that the star athletes were bringing “the new wave of Black girl magic” to a sport that’s been predominantly white. 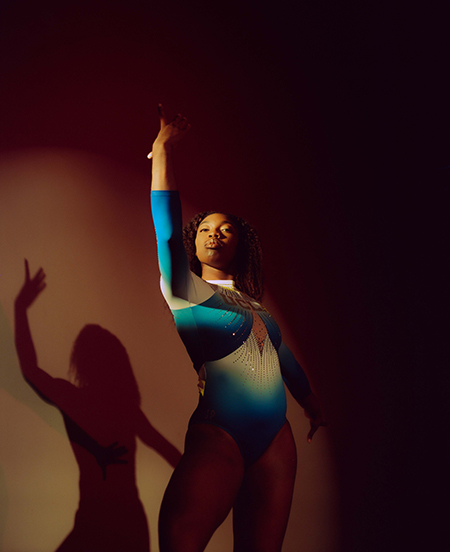 Two months later, in June 2021, a story in Glamour magazine described how the women of UCLA had “brought joy back” to gymnastics. Dennis ’21, Frazier and Katelyn Ohashi ’19 were among the current and former UCLA stars who were hailed for having attracted millions of views on social media for their fearless and buoyant floor routines. Dennis’ and Frazier’s routines honored Black culture and, along with Ohashi’s performance, encouraged female empowerment and self-worth.

Celebrating aspects of racial, cultural or gender identity during gymnastics routines may not have been common a decade ago, but UCLA athletes have always been groundbreakers. Head Coach Chris Waller ’91 says that his team has been deeply impacted by living in the era of the COVID-19 pandemic, Black Lives Matter and Stop Asian Hate movements, allegations of sexual abuse being brought into the national spotlight, and greater openness about mental health issues. “There were times when it felt to me that these issues were by far the most important concerns on the minds of many of our student-athletes,” he says. “The anxiety felt by our team and our staff was very real.”

Frazier, a senior majoring in sociology, says, “I think that when you go through existential violence and a global pandemic with a group of people, you’ll have an incredible bond. Training with these girls and competing for something so much larger than just winning has always been the culture at UCLA, but this year it was definitely a test like no other. I’ve never been on a team so vulnerable and open-minded to change.”

Forty years ago, it was highly unusual for a gymnastics team to include an African American athlete, but UCLA was one of the first universities to break that barrier. Kim Hamilton Anthony ’90, a six-time All-American and a UCLA Athletic Hall of Famer, was the first African American woman to receive a full scholarship to compete in gymnastics at UCLA. Since then, the team has grown organically to include women of all ethnicities, with white athletes at times in the minority.

“When you are choosing colleges, you choose whatever college you think is the best fit for you, and UCLA is a place where I’m allowed to be myself unapologetically.”
— Sekai Wright
This year’s roster includes four African American, 10 Asian or part-Asian, one Latina and seven white athletes, in addition to volunteer Assistant Coach BJ Das, who is half-Indian. In CollegeMagazine.com’s 2020 review of the top 10 collegiate gymnastics programs in the country, UCLA’s program was ranked No. 1 — and was the only one lauded for its diversity.

Diversity, however, was not something the coaches consciously set out to achieve, says former Head Coach Valorie Kondos Field ’87, who led the Bruins to seven NCAA championship titles from 1991 to 2019 and was named Pac-12 Gymnastics Coach of the Century. 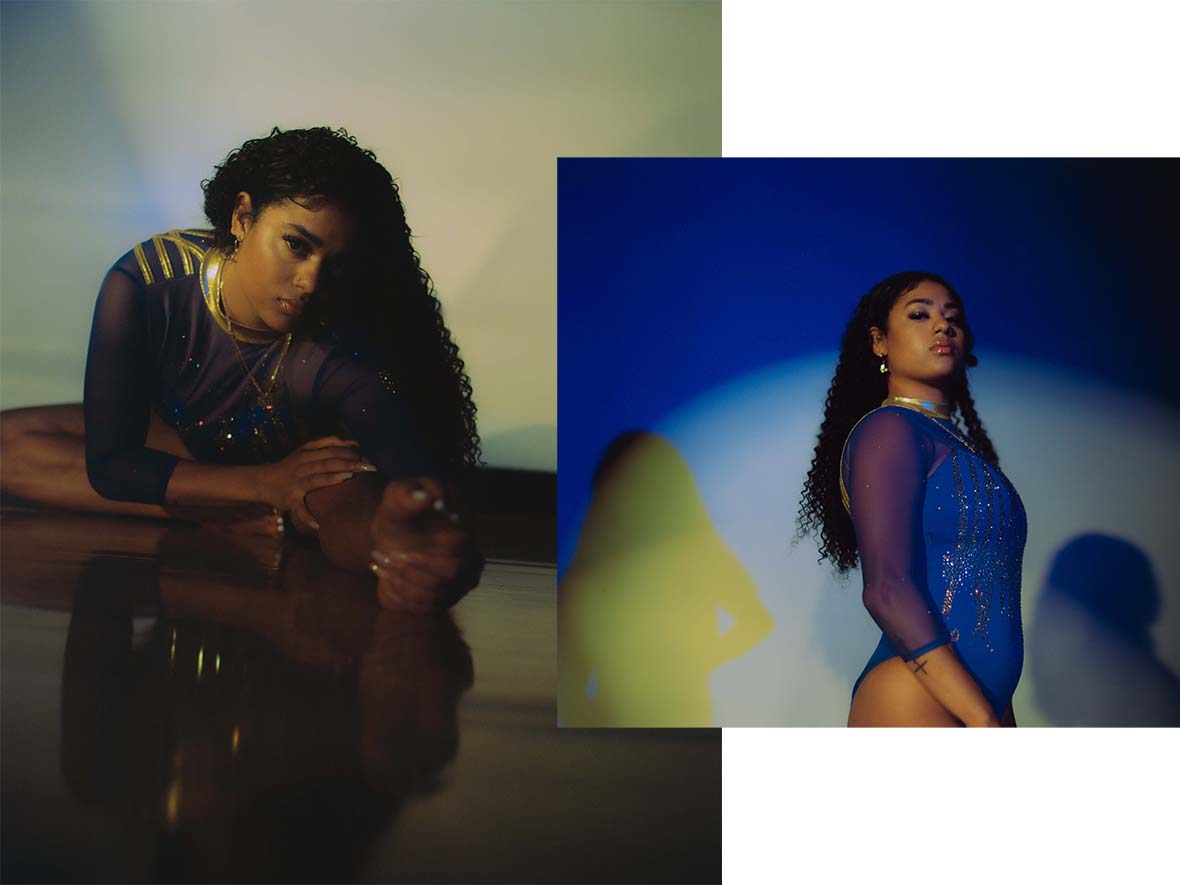 “I don’t remember thinking specifically of recruiting certain types of athletes based on their ethnicity,” she says. “I always enjoyed being able to recruit globally to fill our team with the best athletes that would help UCLA Gymnastics represent the diversity of our student body.”

Kondos Field recently completed a stint as an executive producer and supervising choreographer for last fall’s “Gold Over America Tour,” a high-energy, gymnastics-meets-pop-concert show whose goal was to spread messages of empowerment and togetherness to the next generation of athletes. The show starred multi-Olympian Simone Biles and featured former Bruin gymnasts Dennis and Ohashi.

Jordan Chiles, who famously stepped in for Biles at the 2020 Tokyo Olympics and helped the U.S. win a silver team medal, also toured with the show, which included a segment on mental health called “Overwhelmed.” Chiles is joining the UCLA team as a freshman for the 2022 season, which begins in January. 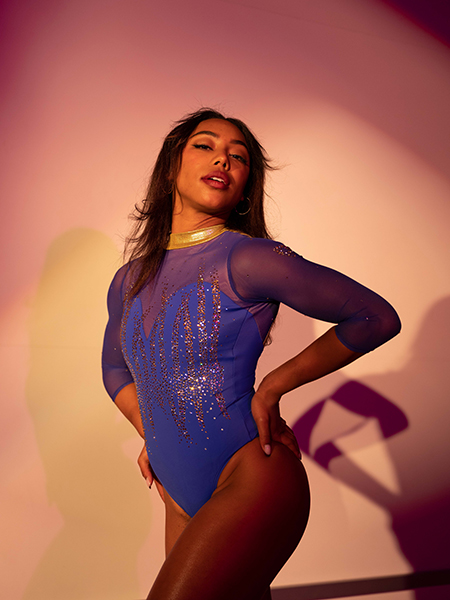 “The first things I saw in UCLA Gymnastics were the way they performed and how they presented themselves as a team and as individuals,” Chiles says. “That drew me in and made me want to connect with them. Having Black gymnasts on the team didn’t make me feel like I had to choose [UCLA], because no matter the skin color, ethnicity or nationality, everyone was showing who they are as a person and just enjoying the moment.”

While being featured in an Essence story and photo shoot might seem like a dream come true for most young women, it also provided a chance for Chae Campbell and Sekai Wright to reflect upon what it means to be a young Black athlete in 2021. For Campbell, a sophomore and the youngest Black athlete on the team, being at UCLA has been a valuable learning experience.

“At the beginning of last season, we had a lot of team discussions on Black history, and that was my first taste of the culture of the gymnastics team,” Campbell says. “I was honestly overwhelmed coming in as a freshman, having to speak publicly about deep societal issues with all of the big-name gymnasts on the team whom I have looked up to. However, it was inspiring for me to watch how Nia, Margzetta and Sekai were able to share their stories and educate respectfully. I was able to bond with them over similar struggles, which helped me find my voice as the year went on. I also appreciated that the entire team and coaching staff wanted us to share our stories and learn from our experiences.”

The culture of the team was what first attracted Wright, a senior majoring in African American studies, to UCLA ― and she doesn’t think it needs to change one bit. “When you are choosing colleges, you choose whatever college you think is the best fit for you, and UCLA is a place where I’m allowed to be myself unapologetically,” she says. “Every year the culture is different, because it’s a different group of women — which is why we spend all preseason bonding. My role as an upperclassman isn’t to change anything. I’m here to push, guide and support my girls, not help change the culture. The closer we are, the stronger the culture of the team will be.”

… And Spreading the Magic of Positivity

All of the Black athletes on the team have expressed their appreciation for the boundless support they have received from their non-Black teammates and coaches, and the feeling has been mutual. Pauline Tratz, a fifth-year senior majoring in communication, grew up in Karlsruhe, Germany, and was a member of the German national team before arriving at UCLA in 2017–2018. She noted that there were not many people of color on her teams in Germany, and the ones who were there were mostly of Asian heritage.

“Each person will leave a mark on the team’s culture and will influence the future of the culture and the success of the team.” 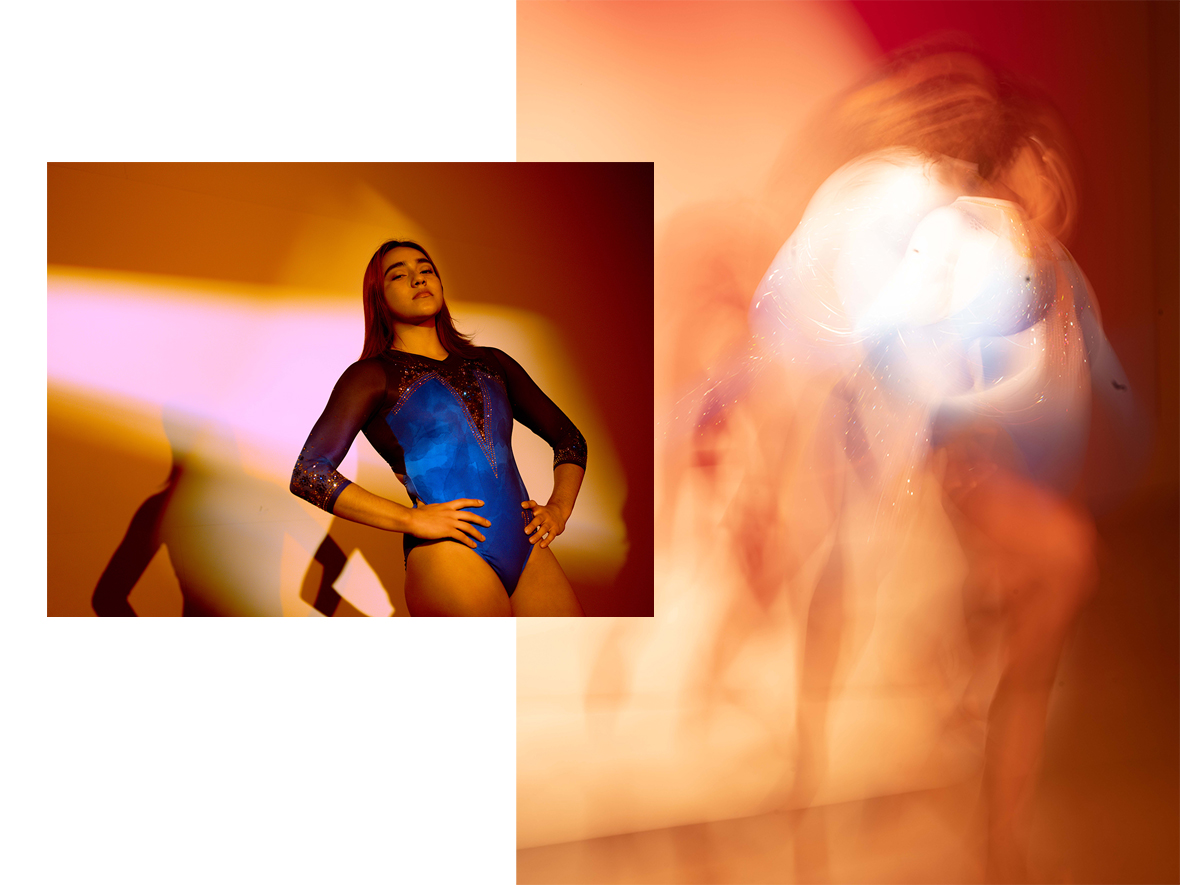 “From the beginning, I appreciated the diversity on the UCLA team,” Tratz says. “I love to see every individual allowed to fully step into themselves and embrace their personality. While having women of color on my team did not influence my decision to compete for UCLA, it has influenced my intention of competing for UCLA. I started to see a bigger purpose in competing for UCLA. It is about what we represent as a team, what we stand for and how we use our platform to spread positive messages.”

Senior Samantha Sakti, a psychology major, grew up in nearby San Gabriel, California, where she was one of the few Asians on her mostly white club team. “When I was being recruited, I noticed that some NCAA teams do not prioritize diversity, which can be noticeable on the roster,” she says. “Since diversity was one of the main factors in my decision to compete for a school, the appearance of women of color on UCLA’s teams did have a bearing on my decision. Seeing people with similar backgrounds made me feel more comfortable and helped me be vulnerable with other girls on the team.” 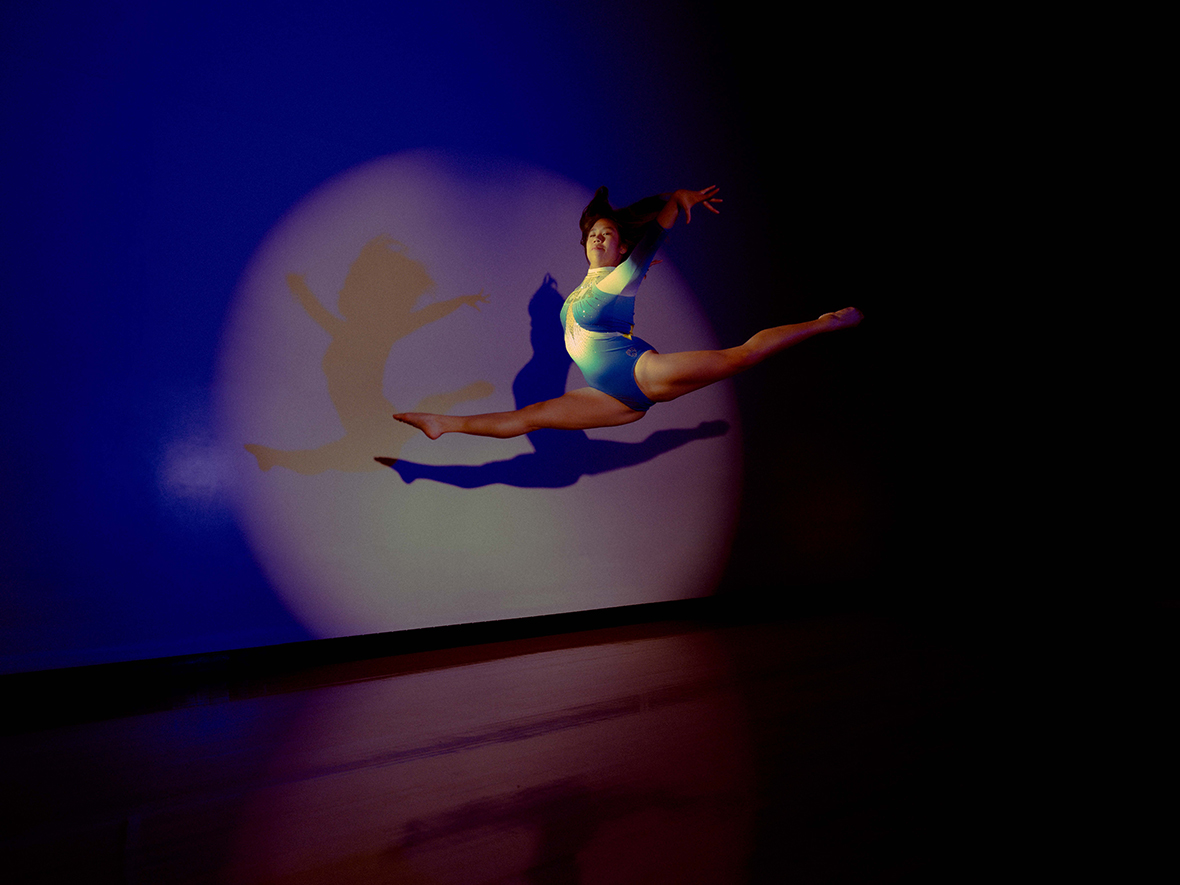 Sophomore Frida Esparza, the one Latina on the roster, says she has always been lucky enough to be in diverse environments, even if there weren’t other Latinas. “I have learned that change needs to happen at the right time, and it only needs a little nudge,” the political science major says. “If you try to change too much at the wrong time, even with good intentions, it will not go as planned and may even backfire. As time passes, the foundation of the team’s culture will remain, but it will evolve with the people coming in and out of the team. Each person will leave a mark on the team’s culture and will influence the future of the culture and the success of the team.”

UCLA’s gymnastics program was the first in the Pac-12 to release a statement condemning racial prejudice and police brutality in the wake of George Floyd’s death in May 2020. Before each home meet last season, the Bruins united with their opponents for a moment of silence in a show of solidarity for social justice and anti-racism. And in February, UCLA hosted Oregon State University for its first-ever Black Excellence Meet, celebrating the accomplishments of the Black community. The Bruins wore black-and-gold “Black Lives Matter” leotards designed by Campbell, Dennis, Frazier, Wright and Associate Head Coach Kristina Comforte ’10.

On social media and at their meets, the Bruins have continued to highlight causes they believe in. Just before their annual Pride Meet in 2020, junior Kalyany Steele anxiously revealed to her teammates that she was bisexual ― and was greatly relieved when her teammates embraced her with hugs and messages of support. She and Frazier currently represent UCLA in “Gymnasts for Peace, Action, and Change” (G-PAC), an organization composed of gymnasts from each Pac-12 program whose goal is to provide education and resources, share experiences and ideas, and create a safe space for fellow student-athletes. 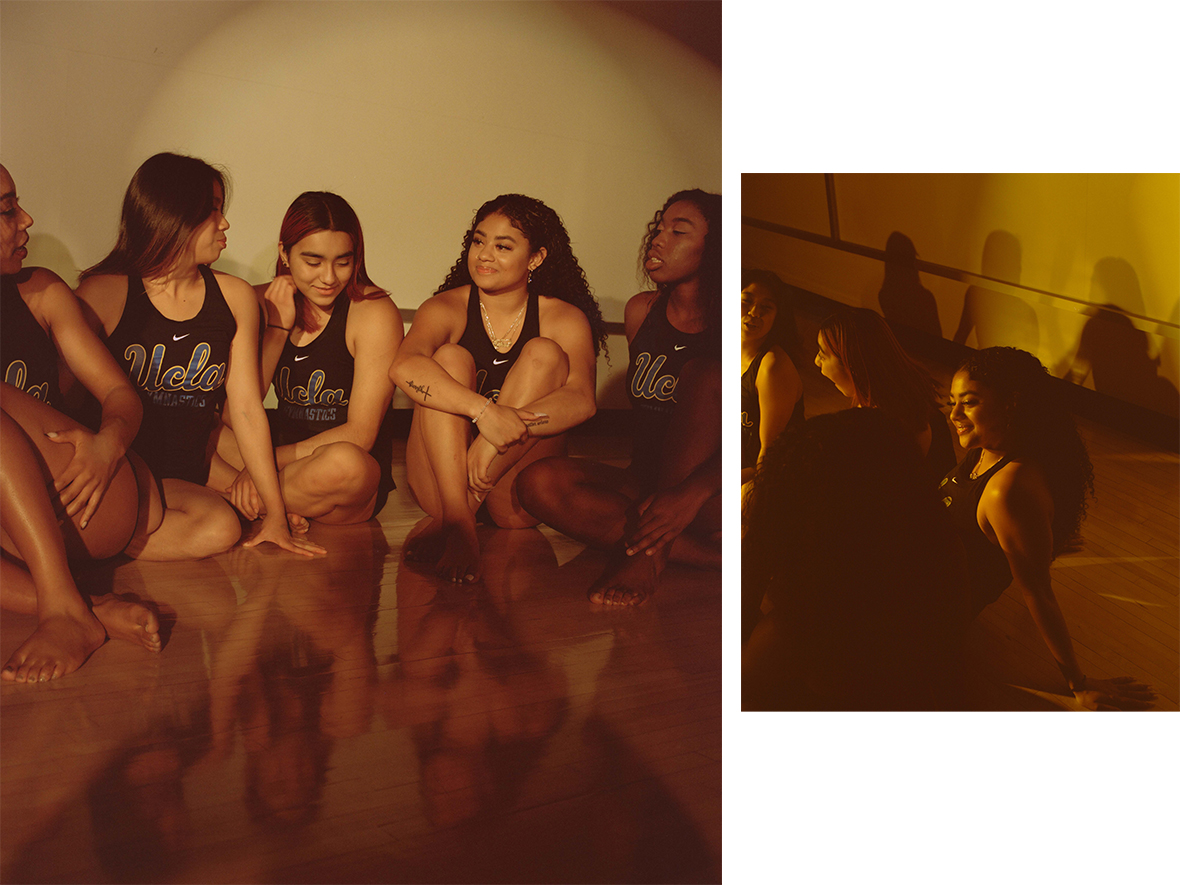 Coach Waller has no doubt that the honest and difficult conversations the team has had about the challenges of the past year have helped his athletes to grow. “I believe that the cultural changes on the team will help each team member find her voice and herself,” he says firmly. “I believe that our culture will support the development of successful leaders. I believe our team will celebrate the joy of competing as a team while feeling a greater purpose.”

He adds, “I hope that UCLA Gymnastics will continue to be a beacon of positive influence for the hundreds of thousands of people who follow our program. Empathy, teamwork, being inclusive, encouraging the voices of individuals and building on our legacy of excellence are all reasons I have to be encouraged about the future of UCLA Gymnastics.”