Their yearbook portraits have a certain sameness. Both wear gowns and mortarboards and look straight at the camera. Hitoshi Yonemura has a broad smile. Iva Toguri wears glasses and a serious expression.

Perhaps they knew each other. Toguri earned her zoology degree in January 1940; Yonemura was working toward earning his B.A. in political science in 1942. She might have attended commencement ceremonies. He was never able to. In August 1942, Yonemura was in an internment camp at Heart Mountain, Wyo.

Fifty years ago, UCLA’s official history treated these two Bruins differently — literally on opposite pages. A Daily Bruin editorial said: “It would be a mistake to infer ... that Iva Toguri was representative of her fellow Japanese-American students. One may mention as more representative Hitoshi Yonemura.”

But they had one thing in common: History was not on their side.

Toguri went to Japan in July 1941 to visit an aunt. When war broke out, she was stranded. Working as a typist for Radio Tokyo, she was recruited by an Australian prisoner of war to host the propaganda show The Zero Hour.

There were a dozen English-speaking female broadcasters on Axis radio. American servicemen collectively called them “Tokyo Rose” — including Toguri, who refused to renounce her U.S. citizenship.

After the war, Toguri returned to the United States, but public pressure on the FBI led to eight charges of treason. She was convicted of one count, stripped of her U.S. citizenship and sentenced to 10 years in prison.

In 1976, the Chicago Tribune revealed that the FBI had fabricated testimony against her. The next year, Toguri was pardoned by President Gerald Ford. S.I. Hayakawa, a U.S. senator from California, praised her for having “remained loyal to the United States despite the fact that the United States [had] treated her unjustly.” 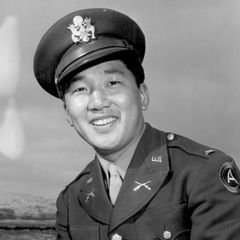 Calisphere
Hitoshi Yonemura in 1944 at the Heart Mountain internment camp, before heading off to war in Europe.

Yonemura also remained loyal under pressure. An active ROTC member at UCLA, he left the Heart Mountain internment camp by becoming a soldier. He was commissioned as a second lieutenant in the 442nd Regimental Combat Team, largely made up of Japanese Americans from Hawaii. They adopted the Hawaiian gambler’s motto “Go for broke.” The most decorated unit for its size, the team fought in France and Italy.

Yonemura was killed in action in Italy in 1945, earning a posthumous Silver Star for gallantry.

While at Heart Mountain, Yonemura gave a brief speech about morale. His words are recorded in the California State University Japanese American Digitization Project: “What promise is there in our future? Can we look upon history for a clue? No, this, our predicament, is unprecedented in all of mankind’s experiences. For a group of citizens to be removed from civil life without proof of crime or without even indication of such is something undreamed of in our democratic conception of government. No wonder we are at loss to understand and our hopes of future dark.”

The final words of his speech seem eerily prescient: “Will we emerge victorious and better, or will we perish along the way? May we, through our diligent efforts and with your thoroughly sympathetic cooperation and guidance, make it so that we will soon be proudly acclaimed by all as fellow Americans.”