PROFESSIONAL SOCCER PLAYER Kaiya McCullough ’19 has already accomplished a lot in her 22 years. As a sophomore in 2017, she led the UCLA women’s soccer squad to within one win of a national title, narrowly losing out to Stanford in the College Cup championship match, 3-2. That season, she was also one of the first college athletes to kneel during the national anthem to protest racial injustice and police brutality.

In 2019, McCullough was named Pac-12 Scholar-Athlete of the Year. The season before that, she received the Athletic Director’s Academic Excellence Award. The center back from south Orange County started every match she played in her UCLA career. Her 92 starts are tied for the fifth most in UCLA women’s soccer history. A political science major, McCullough graduated early so she could ascend to the professional level without having to worry about classes.

Originally drafted with the 32nd pick by the Washington Spirit of the National Women’s Soccer League in January 2020, McCullough spent part of last year with FC Würzburger Kickers in Germany and is currently between clubs.

Both of your parents were Bruin student-athletes. How much did they encourage you to follow their paths into athletics and to UCLA?

My mom [Amy Thorne ’94] was a gymnast, and my dad [Abdul McCullough] was a football player. They met at UCLA. We were an athletic family, and I was a really active, high-energy kid who was drawn to sports. My parents were encouraging, but I wouldn’t say they pushed me into sports. It was just a natural reflection of my interests as a kid. 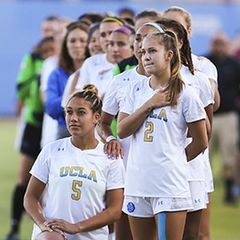 Rand Bleimeister
McCullough kneels at a UCLA soccer match against Iowa State on Aug. 23, 2019. Her activism is inspired by Megan Rapinoe and Colin Kaepernick.

What has life been like for you during the pandemic, especially as a professional women’s soccer player?

It’s been very taxing. Being a professional athlete is already a really tough job. I know everybody’s always saying, “Oh, that would be such a fun job.” But where a normal 9-to-5 office job taxes you mentally, emotionally and spiritually, this one [also] taxes you physically. Not only is there a ton of stress happening to your body, but also every other aspect — the psychology of being ready to play games and the competitive nature of soccer — was multiplied 10 times by the coronavirus pandemic.

When we first went into lockdown, I couldn’t even go onto a field to go kick a ball, so I was just coming up with weird, creative ways to get touches and stay fit. It was hard. The year has certainly taken a toll on me and my mental health, and I’m sure that’s true for plenty other professional athletes and almost every person in the country and the world being affected by the pandemic.

It’s been a tough year, but it’s also opened my eyes to a lot of things. I wouldn’t change my experience of it. There was a lot of growth in 2020.

Who were some of your most important mentors while you were in Westwood?

I was very close to my coaching staff. [Head women’s soccer coach] Amanda Cromwell, Sam Greene, Jenny Bindon and Louise Lieberman [’00] were all really powerful women whom I looked up to and who mentored me throughout my journey at UCLA. Amanda and Sam were the first people I talked to — after my mom — about kneeling [during the national anthem]. They were very instrumental in empowering me to move forward with kneeling.

What was going through your mind when you knelt during the national anthem for the first time?

I don’t remember the match, actually; I think that speaks to just how powerful that moment was for me. Before I knelt, I had brought it up to my coaches. Amanda and Sam suggested, “Let’s bring this up to the team. We’ll talk about it. Whatever you decide to do, we’re going to support you fully.”

“Ultimately, the reasons I stopped standing for the anthem and stopped saying the pledge are the same.”

Before the game, our sports supervisor, Christina Rivera, came in, and she said, “We are so proud of you guys for taking this stand. You have the full support of the athletic department behind you.” It was really nice to hear, because, in doing political protest, you never want to bring bad publicity to the entity that you’re representing. It was good to know that I wasn’t going to be condemned or anything of that nature.

And then when it was actually time to kneel, I was bawling like a baby, because it was so important to me, and it had been so important to me for so long. I was finally able to find the courage to do something about police brutality and racism. I’m pretty sure we won the game, but I don’t really know. That moment definitely changed my life.

There’s a long tradition of activist athletes, particularly at UCLA. Did any Bruins serve as role models for you?

That was one of the really special things about being at UCLA. There is such a legacy of athletes who are activists. I was looking at Jackie Robinson, Arthur Ashe [’66], Kareem Abdul-Jabbar [’69] — there are so many. It was really empowering for me just knowing that they had walked the same path that I was on — but also different because of the circumstances of the times and their being male. I was very humbled to be able to be a student-athlete at UCLA.

In high school, you stopped saying the Pledge of Allegiance. Is there a direct line from that response to taking a knee during the anthem a few years later?

Absolutely. In the educational system in the U.S., we’re taught to blindly say this pledge without thought. We’re taught a whitewashed history. We’re not supposed to question what’s taught to us. For me, there was this sort of awakening in high school, when I started questioning almost everything — the world was revealed to me in a way that it hadn’t been before. I said, “I’m not doing this.” I’m not saying the pledge to a flag that doesn’t even represent all the Americans it has exploited throughout its history. I’m not going to stand up and pledge allegiance to the flag of a country that refuses to acknowledge the harm it’s done to others. I certainly think there’s an evolution in it. Ultimately, the reasons I stopped standing for the anthem and stopped saying the pledge are the same.

Given your interests, do you see yourself one day pursuing politics?

I’ve had a lot of people tell me I’m perfect to be a politician; I don’t know if I should take that as a good or a bad thing, but I certainly want to help in more of a macro sense. I can do a lot of things on an individual level — I started a book club, I interact with people on a personal level, I hope to inspire people through soccer — but I want to help as many people as I can. I feel like politics is a really good way to do that, and I feel as if we need people in office who are genuinely committed to making change. Whether that’s in the form of a politician or somebody who works with civil rights organizations or somebody who’s a policy coordinator, that’s definitely a path I can see myself going on.

If you end up working in politics or policy, what kinds of things would you hope to achieve?

There are so many issues I care about. The thing about U.S. politics is that a lot of times it dances around the really big issues that trickle down and cause a lot of the other issues. The fact that America was founded on the ideal of white supremacy, and founded on the backs of people who were enslaved and on the backs of the natives who were pushed from their land, means everything else is a reflection of our value of white supremacy. Working to dismantle that would probably be the issue that I am most concerned with.

Once we start solving the issue at the core of America, which is white supremacy, then we can address issues of overpolicing of Black communities. We can work out issues on health care disparities and environmental racism. White supremacy affects everything — it fuels patriarchy, which then fuels the gender pay gap. It fuels homophobia and transphobia.

Saman Assefi
McCullough shows off some juggling skills near Royce Quad. Reflecting on her time as a pro player in Germany last year, she says, “There’s certainly more recognition for soccer, even for woman footballers out there, which is pretty cool to see.”