Pop quiz: Who broke the color barrier in Major League Baseball? Any Bruin — and most Americans — know it was Jackie Robinson, when he suited up for the Brooklyn Dodgers. (Bonus points if you can recall the date: April 15, 1947.)

OK, that was easy. Now: Who broke the color barrier in the National Football League? 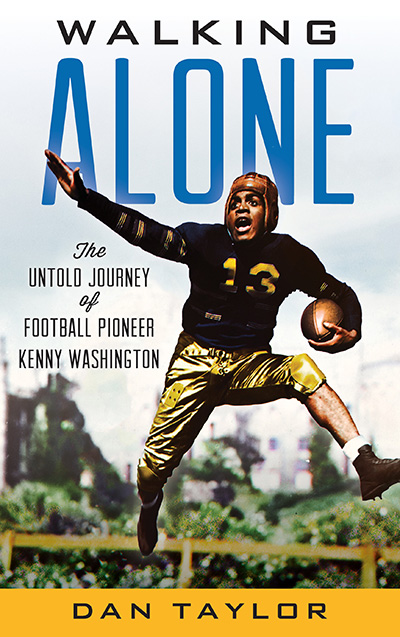 Thankfully, Dan Taylor is here to help. In the new biography Walking Alone: The Untold Journey of Football Pioneer Kenny Washington (Rowman & Littlefield), Taylor shines an overdue spotlight on UCLA star running back Kenny Washington ’41. A year before Robinson’s MLB ceiling-shattering, Washington took the field for the Los Angeles Rams, ending the National Football League’s ban that had kept Blacks from playing in the league for 13 years. Washington played only three seasons for the Rams, but in doing so he opened the door for all the Black players who followed — and changed the league forever.

“I wanted to write this book because one of the greatest football players and most impactful athletes in American history has largely been forgotten,” says Taylor, former longtime sports director for KFSN-TV ABC30 in Fresno and the author of several books about sports history. “That should not happen. Hall of Famers who saw him play at UCLA said he was the best they ever saw. He put Bruins football on the map.”

Taylor documents the verbal and physical abuse — opponents hurling racial epithets, even punching him during games — that Washington endured as well as his refusal to play in the South. But researching the book wasn’t all an exercise into some of the dark chapters of U.S. history. Taylor also learned that Washington, like Robinson, came close to choosing a career in Major League Baseball. “I never knew that Jackie and others lobbied Brooklyn Dodgers president Branch Rickey to also sign Kenny,” he says. But 10 days earlier, Washington had given his word that he would sign with the Rams, and he kept it. How Bruin of him.