“Up until [COVID-19], it was really busy,” says David Kuo ’01, co-owner of Little Fatty, Mar Vista’s 4-year-old farm-to-table Taiwanese-Chinese restaurant. “Sales were brisk. But once [the city] shut down restaurants, we had to come up with an emergency plan.”

In comparison, Little Fatty veers more vegan, vegetarian and gluten-free, inspired by the neighboring Mar Vista farmers market. General Tso’s cauliflower, XO Fatty Noodles and mapo tofu are all favorites. Another standout: Kuo’s Taiwanese Sunday Gravy, a slow-cooked pork stew, or, as Kuo puts it, “an homage to my childhood.”

In 1967, Kuo’s father emigrated from Taiwan to attend UCLA’s graduate program in chemical engineering. More than 50 years later, the name Kuo is synonymous with Taiwanese cuisine in Los Angeles. But when safer-at-home orders were issued in March, he was forced to all but shut down and furlough most of his 25 employees, keeping only his kitchen staff on payroll for takeout and delivery.

“The beginning was really rough, because no one knew what was going on or how bad it was,” Kuo says. Fortunately, Little Fatty already had a strong takeout business, so the transition was relatively smooth.

As for Accomplice, Kuo and his team devised a packaging system so cocktails arrive in vintage-style apothecary bottles. “We really think about the brand, the big picture, from the moment we make it to the moment you drink it at home,” he explains.

Kuo, who has two young sons, credits his multifaceted team with mitigating the crisis: “We have different contacts, different experiences … like a Swiss Army knife.”

By June, Kuo had hired back many of his employees, while also regularly partnering with organizations like Nourish L.A. to distribute meals.

And now he’s expanding, recently purchasing a large facility in Gardena to manufacture dumplings and other food products on a mass scale to supply grocery stores and convenience shops. Plus, he’s building a farm in Mid-City to grow ingredients for his business and create educational programs for local children.

This latest venture is inspired by Kuo’s childhood in West Covina, where his Taiwanese-born mother and grandmother grew fruit and vegetables, such as A-choy, a Taiwanese lettuce used for chili-and-sesame-oil salad, and garlic chives, which are stuffed into dumplings.

Kuo relished their cooking — it’s how he earned the nickname “Little Fatty.” But it was only later, during his time at UCLA, that he actually began to cook. While studying political science, he and his friends hosted Iron Chef competitions.

A few years later, while working in property management, Kuo fell in love with professional cooking — specifically at a resort banquet kitchen he managed. He decided to pursue a degree at Le Cordon Bleu, followed by work in restaurants such as Hotel Bel-Air and Jean-Georges in New York. In 2014, he opened Status Kuo, his short-lived New American concept that predated Little Fatty.

Now, despite the economic crisis spawned by COVID-19, Kuo is confident Little Fatty will continue growing, even as dining changes. “We’re still adjusting, adding new equipment and different protocols. But they’re good problems, because we’re busy and trying to figure it out.” 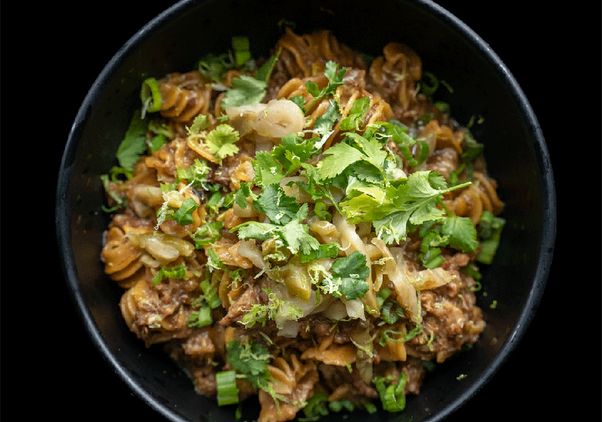 INSTRUCTIONS
Soak konbu and mushrooms in hot water for 30 minutes, then dice.

Brown meat in vegetable oil and season with five-spice powder until almost done.

Cook until tender — about 2 hours.

Serve over any kind of boiled noodles or rice, topped with cilantro and pickled mustard greens.