Following Martin Jarmond’s hiring this spring, some writers noted that he was UCLA’s first athletic director — aside from the first, Fred Cozens in 1919 — to not have a previous connection to the Bruins.

That’s not completely true. Although Jarmond hadn’t set foot on campus until July, one could argue that his Bruin indoctrination began 16 years ago.

While working in the athletic department at Michigan State University, his first job after graduate school, he read Coach Wooden’s Pyramid of Success by John Wooden and Jay Carty. Inspired by the book’s philosophy, Jarmond printed a copy of the pyramid and hung it in his cubicle.

“He told us that during the interview,” says Monroe Gorden Jr. ’93, UCLA’s vice chancellor for student affairs, who headed the search committee that selected Jarmond. During one interview, which was conducted via video chat due to the COVID-19 pandemic, “he actually showed us he had the pyramid hanging on the wall behind him.”

The search committee was also won over by Jarmond’s intelligence, his commitment to diversity and, especially, his energy.

“But it wasn’t beating-your-chest kind of energy,” Gorden says. “It was authentic and genuine. He got us excited because of the energy he brought.”

At Boston College, where he was athletic director from 2017 through spring 2020, that energy helped Jarmond, 40, bring a new level of excitement to athletics, in part by reengaging the program’s alumni.

“He was really changing the perception of Boston College athletics,” says Jared Dudley, a Los Angeles Laker and former Boston College basketball star, who graduated a decade before Jarmond arrived. “He brought a new, innovative style to the table. He was very involved with the alumni, he was always out there tailgating with fans and he heard what they wanted — and he delivered a lot of it.”

The job of an athletic director is complex, serious and demanding, but Jarmond made sure that his department at Boston College wasn’t too buttoned up.

“He created a ‘fun committee,’ because he wanted to make sure the staff had a great time,” says Jocelyn Gates, Boston College’s senior associate AD. “He had yoga practice on Fridays. He had people bring their children in for trick-or-treating through the office on Halloween. He’d say, ‘Mind right, game right’ — he believed that was key to getting us to be the best we could be.”

Now, Jarmond takes the mantle of a storied athletic program at one of the most challenging times in its history, particularly in light of the Pac-12 Conference’s decision to postpone intercollegiate competitions through the end of 2020. In a phone interview that was conducted prior to the Pac-12’s announcement, Jarmond spoke about being UCLA’s first Black AD, the expectations he’ll face, his favorite movies and the memorable advice he received from a mentor.

“UCLA is the elite. Our job is to build on that storied past, that foundation and that tradition of winning, championships and excellence, and see how we move into the future.”

You’ve mostly downplayed the significance of your being UCLA’s first Black athletic director, saying that you’re looking forward to a time when that wouldn’t be the story. But what might your presence mean to UCLA’s student-athletes?

Being UCLA’s first Black athletic director is something I don’t take lightly. I know it’s important, and I understand it’s historically significant. But it stops there for me because of the work we have to do to make it so that it’s no longer a big “first.”

But I do believe that for people to decide where they want to go professionally, it’s nice to see professionals handling their business who look like you. It might give some of our minority students the motivation to say, “I can go into whatever field I choose to, because I see someone who looks like me.”

Also, candidly, I’ve met with recruits and their families who have said they felt more comfortable dealing with someone who looked like them in a position of leadership. People don’t perform their best unless they’re comfortable, and I hope that my presence makes some parents, student-athletes and recruits feel more comfortable.

Before taking the Boston College job, you worked at Ohio State University. Was there anyone at OSU whose advice you sought before becoming an athletic director?

It was the president, Dr. Michael Drake. I met with him on my last day at OSU, and he said, “Winning is important — alumni and everyone else want you to win. But integrity is the most important thing that you have. Five years from now, people will forget the win-loss records, but they won’t forget the record on your integrity.”

So he instilled that doing things the right way is paramount. We all want to win, but that’s not the end-all, be-all. What we do is about giving young people an experience that helps them after they leave campus. College athletics is an uber-competitive environment. Coaches are competitive. I’m competitive. But we can’t lose sight of integrity, which is the most important thing.

I’m fortunate to have kept in touch with Dr. Drake since I left Ohio State, and I was thrilled to learn that he would be the next UC president. I loved working with him and learned so much from him during our time together at OSU. He is a leader of great character and integrity who is going to be tremendous for the UC system.

Find out how coaches and student-athletes are dealing with the coronavirus pandemic in What’s Changed for UCLA Athletics.

Lately, UCLA’s student-athletes have been more vocal about certain issues, including wanting to help shape the athletic department’s COVID-19 precautions. How do you view that trend?

I promote the ability of our student-athletes to use their voice and have their platform. That’s their opportunity as UCLA student-athletes, but it’s also part of their responsibility. So I always promote their having a voice and speaking about the things that matter to them. That’s what you do in college: You find your voice and find what you’re passionate about. You grow through uncomfortable situations. You get better by engaging with people from diverse backgrounds who might not think or talk like you. You try to make change and do good. So I encourage that.

We were doing most of it already. But we’re going to always listen to student-athletes and get their feedback — it’s the only way you can be the best you can be. Part of my job is to listen to those who love and have a vested interest in UCLA. That doesn’t mean you do everything you hear. But we owe it to UCLA to get guidance from stakeholders who love being Bruins. We’ll always listen and always try to do what’s in their best interest, while balancing the needs and desires of our faculty and staff and all of the constituents who care about UCLA.

As you’ve probably heard a few times since taking the job, UCLA has won 118 NCAA team championships. From 2000–01 through 2018–19, there were just two years in which Bruins did not win a national title. How do you navigate the expectations that come with all of that success?

I love those expectations. UCLA is the elite. Our job is to build on that storied past, that foundation and that tradition of winning, championships and excellence, and see how we move into the future. How do we maintain being elite? But it’s an honor to have that challenge. To be a Bruin is to be a champion. So our expectation should be to be at a championship level. I embrace that, I love that. That’s what it means to be a Bruin — to be a champion, on and off the field, in every aspect of your life.

Look, Bruins are elite. That is going to be our North Star. We’ll breathe, eat and sleep elite. To me, that stands for energy, leadership, integrity, toughness and excellence. We’ll be passionate, we’ll have the energy to do the work we want to do. We’ll be leaders for ourselves and others, in how we serve the people we represent and work with. Integrity is the most important aspect: We’ll do things the right way and not cut corners. And being great takes toughness. You need a level of grit to excel in the way we’re expected to excel. And excellence is the goal in all that we do. We’re committed to being the best we can be and becoming the best version of ourselves. So that’s what we’ll strive for and that’s how we’ll carry ourselves. That’s the work. 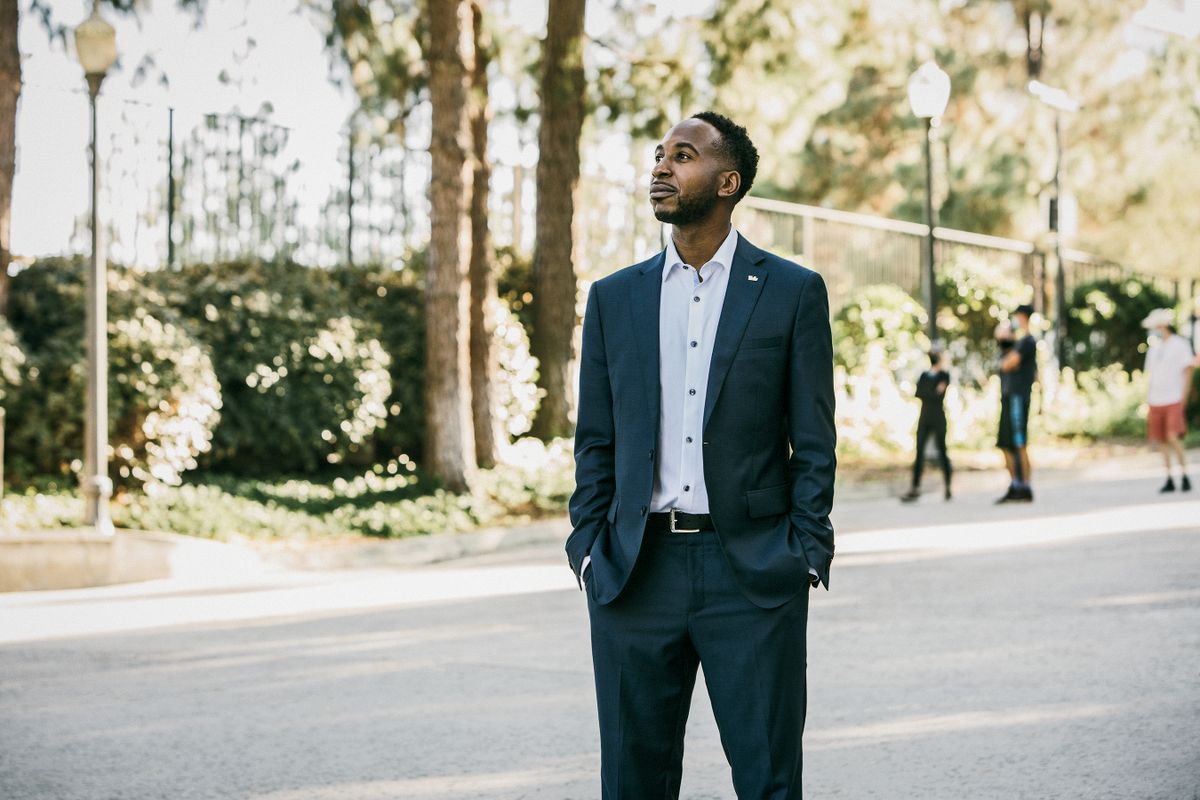 Who are some of the Bruin icons that stand out most to you?

People like Arthur Ashe ’66 and Ann Meyers Drysdale ’79, who didn’t just transcend their sports, but became iconic for their service in this world. That’s awe-inspiring to me. And then you think of Jackie Robinson and Kareem Abdul-Jabbar ’69. It’s phenomenal what they’ve been able to do. So I come in humbled at how Bruins impact the world.

And finally, Coach Wooden and his Pyramid of Success. That pyramid is transcendent because of how valuable it is to how one runs their life and how they go about their business. More than the championships and the wins, Coach was an unbelievable person, and what he left us will live on for generations to come.

You played college basketball at UNC Wilmington and, like another well-known hoops star with the initials M.J., you were raised in North Carolina. As a high school sophomore, Michael Jordan was famously cut from his varsity team, and he has said he used that as motivation for many years after. When you were cut from your eighth grade team, did that give you any long-term motivation?

(Laughs.) I can’t compare my situation to what it did for Michael Jordan — it inspired him to go beyond what I could dream of doing. But it did motivate me to put in a lot of time in the gym with my father, and to put my coach in a situation where his choice was already made because of the improvement I had made. So I don’t know how much it has motivated me since then, but it definitely inspired me at the time and it prepared me to make the ninth grade team.

Do you have a favorite sports movie, and is there a scene or a quote that stays with you?

I’ll give you two non-sports movies. The Godfather is my favorite movie, and one quote that comes to mind is when Michael Corleone says, “Don’t ever take sides with anyone against the family.” I think family is really important.

Another favorite is Shawshank Redemption. It’s a reminder that sometimes when we feel our own narrative is done, it’s not. You can do the work to get to where your narrative isn’t over. You can’t get too high or too low. And when it looks bleak or like there’s no hope, you can persevere, and you will come out the other side. That’s especially true for an AD: You know you’ll have ups and downs, but you can be positive, do the work and see it through.