Who has ever looked so good at 100? That handsome countenance, those great bones, that lush Kentucky bluegrass, the whole edifice shimmering in the golden hour as the sun sets over the San Gabriels. The gentle pitch of seats extending out and slightly up — when viewed from above, the way God sees it, calling to mind the world’s largest bone-china platter. And that logo on the façade above the south colonnade, welcoming you in: the green script, the flower tipped at the same angle as the one in a flamenco dancer’s teeth, all lit up in neon when the sun finally slips behind the hills.

It’s the Rose Bowl — the most famous stadium on Earth, proud home of UCLA football since 1982, and now celebrating its centenary. Designed by renowned architect Myron Hunt, the bowl was built for a quaint $272,000, just $4.7 million in today’s money. The original horseshoe design gave way to the current closed bowl when the south end was filled in with seats in 1928, boosting capacity to 76,000. In 1972, the bowl was enlarged to hold 105,000; the official current capacity is 91,136. Hunt modeled it, loosely, after the Yale Bowl, built in 1914. But really: Who possesses any sense of romance for the Yale Bowl? 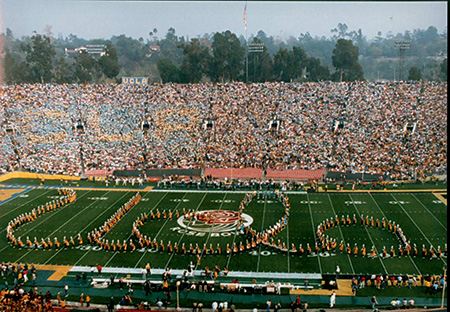 One enduring, and endearing, feature of a venue rich with them is its unchanging name. The Rose Bowl Operating Company — a management board whose 13 members are nominated by an assortment of local grandees and institutions, including UCLA — and the Rose Bowl Legacy Foundation, which helps raise funds for capital improvements, seem determined not to venture down the road to corporate naming rights. A modest exception came in 2017 with the rebranding of the playing surface — that emerald grass, which is, in fact, replaced in toto before each football game — in honor of Tod Spieker ’71, a famed swimmer at UCLA in the late 1960s.

Others have received more lasting tribute in the form of statues around the premises. Here’s Jackie Robinson, who attended UCLA from 1939 to 1941 and remains the only Bruin to letter in four sports. Here’s Keith Jackson, the legendary college football broadcaster who coined “the Grandaddy of Them All” to describe the Rose Bowl contest itself. And here’s soccer star Brandi Chastain, depicted for eternity in bronze at the moment she won the Women’s World Cup for the U.S. at the Rose Bowl, ripping off her jersey and dropping to her knees in exultation. Her statue was dedicated in 2019; that game, played in 1999 in front of 90,185 fans, remains the most-attended women’s sporting event in American history.

One of college football’s greatest championship games was played here in January 2006, when the Texas Longhorns defeated (ahem) USC, 41-38 — a Texas touchdown with 19 seconds left capping 60 minutes of deliriously thrilling action. The Rolling Stones have caterwauled here; Janis Joplin, Pink Floyd and Beyoncé have, too. The Rose Bowl has occasionally done double duty as a literal house of worship; in November 2004, Billy Graham held his final California Crusade at the bowl. 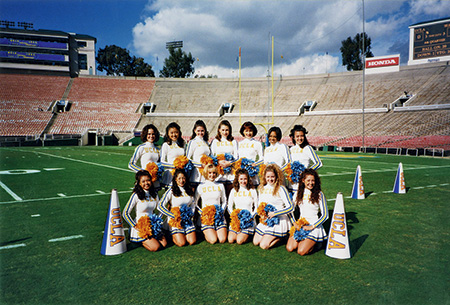 Is it too much to say the Rose Bowl is UCLA, and UCLA the Rose Bowl? Certainly not. The field has been the site of countless big moments over the years, particularly since the football team arrived at the promised land 40 years ago. The marching band debuted its epic “Downfall of Troy” halftime extravaganza in 1984 and has performed it every four years since 1991.

Another Troy — Aikman ’08 — transferred from Oklahoma before the 1987 season and led his new squad to an undefeated record at home and a No. 10 final ranking. The Bruins won four in a row at the Rose Bowl against USC in the ’90s, half of a rivalry-record eight straight victories for the Blue and Gold between 1991 and 1998.

How to express sufficient awe about, and even gratitude for, this modern Parthenon, this National Historic Landmark just 25-odd miles up the road from Westwood? Of course, greater Los Angeles is no stranger to natural and architectural gems: Dodger Stadium. The Hollywood Bowl. Walt Disney Concert Hall. Randy’s Donuts in Inglewood. And, of course, the cathedral that is Pauley Pavilion. But pay special fealty, Bruins, to the Rose Bowl, resplendent in the fading light of the Arroyo Seco. 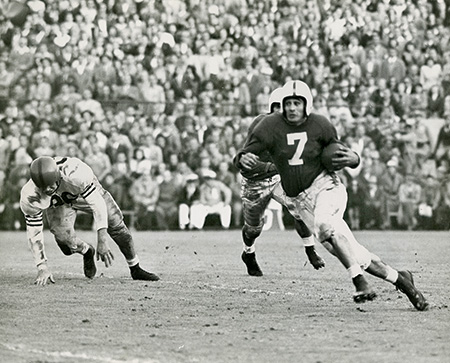 From any vantage point inside, squint and you’ll be forgiven if you swear you see the peerless, genteel former player and head coach Terry Donahue ‘67, M.S. ’77, winner as coach of three Rose Bowls (the Bruins have won five overall), back on the sidelines in his golden polo shirt. His name graces the 150,000-square-foot pavilion — the seven-tier stack that’s home to event spaces, luxury suites and a state-of-the-art press box that includes a full broadcast studio — overlooking the field and the Arroyo from high above the 50-yard line. There are worse legacies. Take it all in, and genuflect. As it begins its second century, the Grandaddy of Them All still outshines them all, more stately and beloved than ever.