When Cari Champion ’98 left her job as co-anchor of ESPN’s flagship SportsCenter two years ago, she gave up massive exposure and a paycheck to match. But she gained unfettered freedom to express her own views by launching the interview-based Naked With Cari Champion podcast. At the cable network, she says, “I was never able to be my true self in doing the sort of journalism I wanted to do. On TV, it's two questions and you're done. Podcasting, especially as I'm trying to do it, allows you to get a little deeper, a little more detailed."

Champion is one of several UCLA alums heeding the siren call of podcasting, and no wonder: The audio-on-demand medium has effectively repurposed talk radio for the internet age, and some 100 million Americans now download at least one podcast every month. Bolstered by an upswing in listenership during the pandemic, an estimated two million podcasts now compete for attention from an audience eager to hear entertaining voices via their laptops and smartphones.

Invented in 2004, podcasting gained respectability a couple of years later when NPR put This American Life online. In 2009, comedian Marc Maron started recording conversations with friends in the stand-up business. His WTF podcast caught on and, in 2015, President Barack Obama visited Maron's Pasadena garage to talk basketball and statecraft. Alongside the boom in interview-based podcasts, true crime podcasts took off in 2014, when Serial used sound effects, music and multiple sources to unravel a murder mystery over 12 episodes. In 2021, podcast ad revenue topped $1 billion.

As the podcast industry becomes increasingly lucrative, many have embraced the medium as a way to mix personal passions with business. Among the UCLA–schooled talents now in the podcasting space is entrepreneur Adam Mendler ’10, whose Thirty Minute Mentors show features Q&A sessions with businesspeople, politicians, athletes and entertainers. He says, “I believe podcasting can be an effective medium for bringing these conversations to life and making them as powerful as possible. The concept is to give listeners access to the best mentors possible, whether it's a Fortune 500 CEO, an Olympic gold medalist or a Grammy winner.”

“One of the things I love about podcasting is that it gives you the opportunity to bring conversations with the most interesting and successful people to audiences all over the world, in a way that listeners can feel like they’re in the room with you.”

Mendler, who conducts interviews from his Los Angeles office when he’s not running the e-commerce company The Veloz Group, has coaxed leadership tips from such guests as Kayak co-founder Keith Melnick, former California Senator Barbara Boxer, entertainer and entrepreneur Suzanne Somers and hip-hop producer Tricky Stewart, a hitmaker for Beyoncé, Katy Perry and Justin Bieber. “Not every listener will be interested in the vocations of every guest, but I still want the information to be relevant,” explains Mendler. “Some people tuning in might not know who Tricky Stewart is, but what you do know is that a guy who has sold more than 50 million records, won multiple Grammys and worked with all these big names in music is someone who has a lot of wisdom. If you take 30 minutes out of your day, you're probably going to learn things that you can apply to your life and your career.”

Times executives agreed. In 2018, they greenlit Miller’s pitch for Larger Than Life. The podcast details Robinson’s heyday in the ’60s and ’70s, following the Watts riots when the kingpin of the South Los Angeles street-racing scene hung out with actor Steve McQueen, befriended Times publisher Otis Chandler and dressed up as Darth Vader (with a Star Wars producer’s blessing). Partnering with L.A. mayor Tom Bradley, Big Willie staged multiracial street-racing events on Terminal Island to defuse tensions between the Black community and the police. “I’ve written complicated stories [for print], but those experiences didn’t hold a candle to the complexities of a narrative podcast,” says Miller, a former Daily Bruin reporter and columnist.

“Audio storytelling is much more intimate, because people are hearing your voice, oftentimes in their earbuds. They're hearing these characters laugh, cry, swear. It's a level of emotion you can't really convey via print.”

Koury Angelo
Daniel Miller holding one of the many books he used to research for his podcast.

An engineer and a technician — both from the Times — provided Miller with high-end microphones and taught him the fundamentals of proper mic placement. Beyond the technology, Miller says, “The biggest difference between writing for print and producing audio journalism is that you have to hear how your narration flows with the interviews. There’s no way to tell if it works until you listen. Audio storytelling is much more intimate, because people are hearing your voice, oftentimes in their earbuds. They're hearing these characters laugh, cry, swear. It's a level of emotion you can't really convey via print.”

And there were plenty of emotionally fraught moments on Larger Than Life, especially after Miller discovered, midway through production, that part of Robinson’s narrative turned out to be false. “We were thinking our story about a bombastic street racer who had a vision of peace through racing would really resonate for people,” he says. "But through reporting, we learned that a huge part of Willie’s persona — his military valor — was a lie. That led to some incredibly difficult interviews and very tense moments as we revealed this secret to Big Willie’s friends, family and acolytes. But we got a much richer, more nuanced story.”

“If this pandemic has taught us anything, it’s to be more honest and more vulnerable, because we don’t have that much time left. You can’t dance around topics anymore.”

Naked With host Champion also aims for nuance on her podcast, which debuted in March 2020 on iHeartRadio, with sponsors including AT&T and NBCUniversal's Peacock streaming service. “I want to create content,” she says. “I want to tell stories.” Fans of the show, including some of Champion’s 430,000 Instagram followers, learn as much about the host as they do about her guests. Chatting with actress Yvonne Orji, football player Victor Cruz, Hall of Fame coach Eddie George or WNBA star-turned-Atlanta Dream co-owner Renee Montgomery, Champion might discuss her complicated relationship with her mother, the cross-country drive she made in her Nissan Altima to a tiny TV station in West Virginia for her first gig, the startling pillow talk with a famous (unnamed) celebrity she once dated, or the controversial live mic incident that got her bounced from an Atlanta TV station early in her career. “That’s why I call it ‘naked,’” she says. “I feel like if I’m more revealing, then [the guests] will be more revealing.”

Gifted with a honeyed speaking voice, Champion, who got her start in journalism as a reporter for the Daily Bruin, sometimes guides her guests into dark backstories involving suicide, alcoholic parents and rape. Black Lives Matter issues also serve as a throughline. “Now I'm preaching,” Champion exclaimed on one recent podcast as she urged successful Black people to honor their roots by investing in the Black community. “If this pandemic has taught us anything, it’s to be more honest and more vulnerable, because we don’t have that much time left. You can’t dance around topics anymore.”

Articulate, curious, erudite and opinionated: numerous UCLA alums are finding — and amplifying — their voices through podcasts. Here are a few masters of the form who have cut through the teeming competition to amass sizable followings. 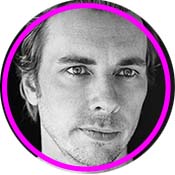 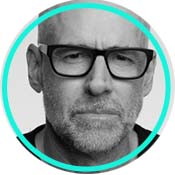 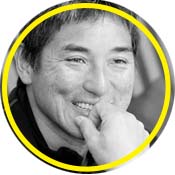 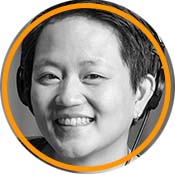 Kathy Tu ’08 co-created and co-hosted the queer podcast Nancy, which took a chatty approach to LGBTQ issues for four years ending in 2020. Tu now serves as a podcast producer for WNYC's RadioLab. [Read more about Tu and Nancy in her 2019 interview with UCLA Magazine.] 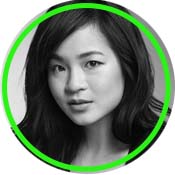 Kelly Marie Tran ’11 turned to podcasts following her big-screen debut in Star Wars: The Last Jedi. She voice acted in 2019's fictional thriller series Passenger List, and last summer lent her voice to CultureVerse, a 12-part podcast for kids that dramatizes folklore from various parts of the world.

Listen to the alumni voices featured in this story and other Bruin podcasters in our Spotify podcast playlist: