The body’s immune cells naturally fight off viral and bacterial microbes and other invaders, but they can also be reprogrammed or “trained” to respond even more aggressively and potently to such threats, report UCLA scientists who have discovered the fundamental rule underlying this process in a particular class of cells.

In a study published June 18 in the journal Science, the researchers identified a key molecular mechanism within macrophages, infection-fighting cells of the innate immune system, that determines whether — and how well — the cells can be trained. Their findings could help pave the way for future targeted strategies to enhance the function of the immune system.

“Like a soldier or an athlete, innate immune cells can be trained by past experiences to become better at fighting infections,” said lead author Quen Cheng, an assistant clinical professor of infectious diseases at UCLA’s David Geffen School of Medicine. However, he noted, the researchers had previously observed that some experiences seemed to be better than others for immune training. “This surprising finding motivated us to better understand the rules that govern this process.”

Whether immune training occurs depends on how the DNA of the cell is wrapped. In human cells, for instance, more than 6 feet of DNA must fit into the cell’s nucleus, which is so small that it is not visible to the naked eye. To achieve this feat, the DNA is tightly wrapped into chromosomes.

Only selected regions of the DNA are exposed and accessible, and only the genes in those accessible regions are able to respond and fight infection, said senior author Alexander Hoffmann, UCLA’s Thomas M. Asher Professor of Microbiology and director of the Institute for Quantitative and Computational Biosciences.

However, by introducing a stimulus to a macrophage — for example, a substance derived from a microbe or pathogen, as in the case of a vaccine — previously compacted DNA regions can be unwrapped. This unwrapping exposes new genes that will enable the cell to respond more aggressively, in essence training it to fight the next infection, Hoffmann said.

The new research reveals that the precise dynamics of a key immune signaling molecule in macrophages, called NFκB, determine whether or not this unwrapping and exposing of genes occurs. Moreover, the researchers report, the dynamic activity of NFκB itself is determined by the precise type of extracellular stimulus introduced to the macrophage.

“Importantly, our study shows that innate immune cells can be trained to become more aggressive only by some stimuli and not others,” Cheng said. “This specificity is critical to human health because proper training is important for effectively fighting infection, but improper training may result in too much inflammation and autoimmunity, which can cause significant damage.” 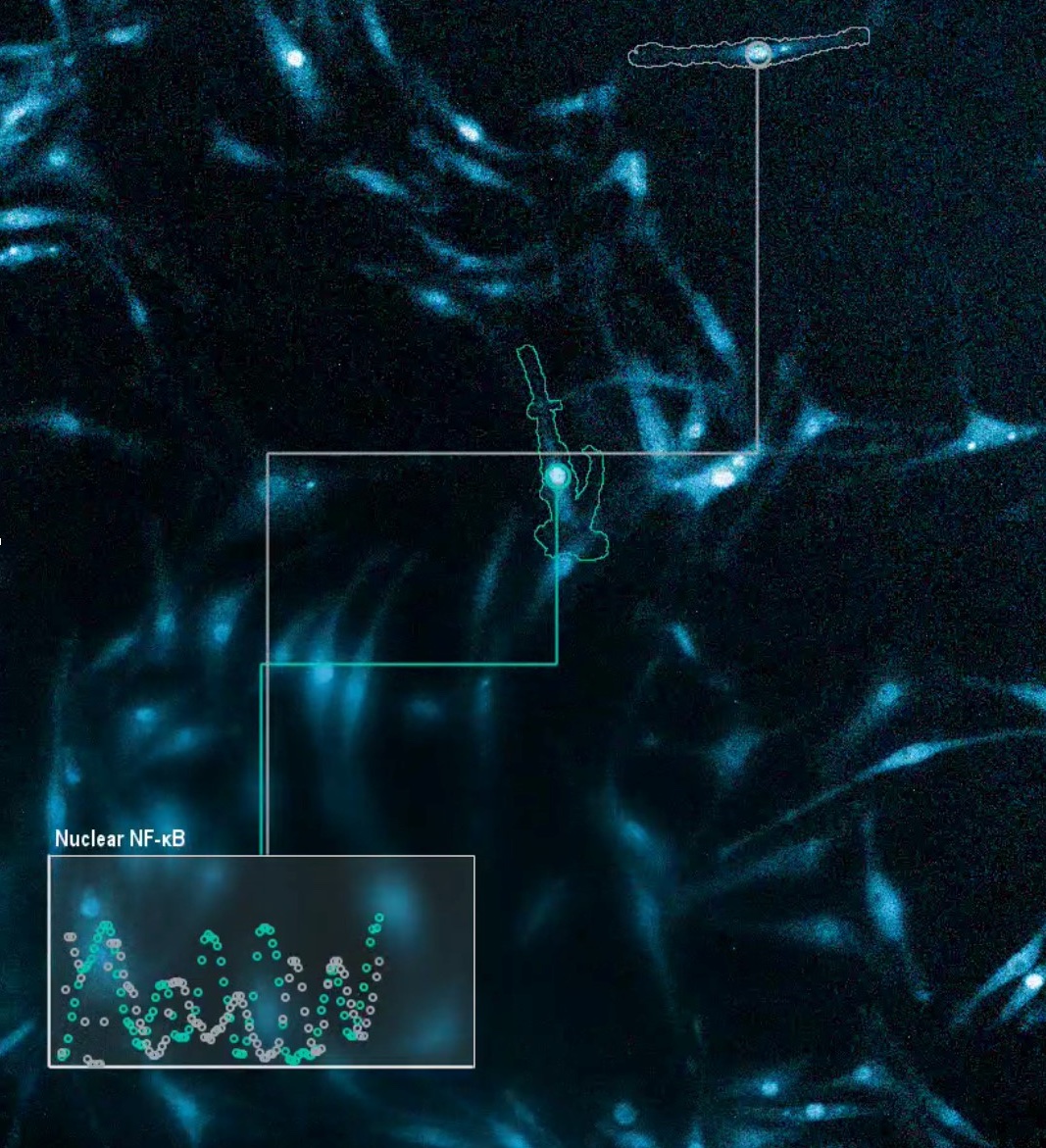 Brooks Taylor/UCLA
In this image from a microscopy video, scientists track the activity of NFκB inside the cell as it responds to a stimulus.

NFκB helps immune cells to identify incoming threats. When receptors on immune cells detect threatening external stimuli, they activate the NFκB molecule inside the cell. The dynamics of NFκB — how it behaves over time — form a language similar to Morse code by which it communicates the identity of the external threat to the DNA and tells it which genes to ready for battle.

The specific “word” of this code that NFκB uses to tell DNA to unwrap is dependent on whether NFκB is oscillatory or steady over eight or more hours after encountering a stimulus. Oscillating NFκB builds up in a macrophage’s nucleus, then moves into the cytoplasm, then returns to the nucleus in cycles, much like a swinging pendulum. Non-oscillating, or steady, NFκB moves into the nucleus and stays there for several hours.

Using advanced microscopy, the researchers followed the activity of NFκB in macrophages derived from the bone marrow of healthy mice, tracking how the molecule’s dynamics changed in response to several different stimuli. They discovered that NFκB was successful at training macrophages — unwrapping DNA and exposing new infection-fighting genes — only when the stimulus induced non-oscillating NFκB activity.

“For a long time, we’ve known intuitively that whether NFκB oscillates or not of must be important but had simply not been able to figure out how,” Cheng said. “These results are a real breakthrough for understanding the language of immune cells, and knowing the language will help us ‘hack’ the system to improve immune function.”

The researchers were also able to simulate this training process with a mathematical model, and the predictive understanding they gleaned may allow for future precision-targeted engineering of trained immunity, Hoffmann said. Mathematical modeling of immune regulatory systems is a key goal of his laboratory, in order to use predictive simulations for precision medicine.

Cheng earned his Ph.D. under Hoffmann’s guidance through UCLA’s Specialty Training and Advanced Research, or STAR, program for physician scientists.

Hoffmann and Cheng expect this research to inspire a wide range of additional studies, including investigations into human diseases caused by immune cells that are improperly trained, strategies to optimize immune training to fight infection and ways to complement existing vaccine approaches.

“This study shows how collaborations between researchers in the UCLA College and David Geffen School of Medicine can produce innovative and impactful science that benefits human health,” Hoffmann said.

The study was funded by the National Institutes of Health and the UCLA Department of Medicine’s STAR program.