The campus hummed with excitement today as more than 5,000 alumni and other guests participated in the launch of UCLA’s 100th birthday year.

UCLA 100 festivities kicked off with nearly 100 lectures, tours and other activities for the university’s largest-ever Alumni Day, where returning graduates took in lectures on social justice, played life-size chess with their families and commented often on how many new buildings had sprung up on campus since their last visits.

Alumni Day was paired with a special centennial installment of the annual TedxUCLA conference, featuring discussions on the subject of time. And the culmination of the day’s events is set to take place at 9 p.m., when a building-sized light-and-sound show called “Lighting the Way” will be projected onto UCLA’s iconic Royce Hall, highlighting the people, breakthroughs and moments that defined the campus’s first century. The display is free and open to the public.

Saturday’s celebration marks the beginning of a year-long series of events on the campus and across Los Angeles, celebrating UCLA’s connection to the city, expanding public access to the university’s scholarly resources and building on the campus’ longstanding commitment of service to the community. In less than 100 years, UCLA faculty, students and alumni and helped invent the internet, confirmed the existence of the massive black hole at the center of the galaxy, won 14 Nobel prizes and made UCLA the most applied-to university in the nation.

The centennial festivities continue with a free community celebration on May 22, the eve of the 100th anniversary of UCLA’s founding, in downtown Los Angeles’ Grand Park. Other centennial events throughout the year will include free concerts, such as by La Sonora Dinamita at Levitt Pavilion; a partnership with the CicLAvia open streets event in October; participation in June’s LA Pride Parade; an expansion of the campus’s annual Volunteer Day to 100 sites across the globe; and multiple public lecture series on campus and downtown.

Saturday’s celebration included a conversation among Gene Block, Albert Carnesale and Charles E. Young, the three UCLA chancellors who have shaped UCLA since 1968; a discussion featuring the heads of UCLA’s ethnic studies centers on 50 years of social justice research; a look at UCLA’s history with the Olympic Games and at its upcoming role in the 2028 Los Angeles Olympics and Paralympics; a tour highlighting how UCLA is a living laboratory for the latest sustainability innovations; a walking exploration of black history on campus; a presentation about the future of food at UCLA’s vertical gardens near Sproul Landing; a networking event for first-generation college students; a Q&A with UCLA alumna and retired astronaut Anna Lee Fisher; a historical retrospective on UCLA’s LGBTQ community; a conversation with Washington Post reporter Matea Gold about political divides and the 2020 presidential campaign; and tours of the new football and basketball facilities, campus artwork and laboratories.

Larry and Sally Parks, who met as UCLA students in the late ’50s, were returning to campus for the first time in 60 years. Alumni Day wasn’t the only draw: Their granddaughter, Kiera Dixon, is a current UCLA student. Larry Parks recalled that there were only a handful of buildings and no parking structures when he attended; Dixon and her grandmother discovered they had both used the same spot in Powell Library for naps. 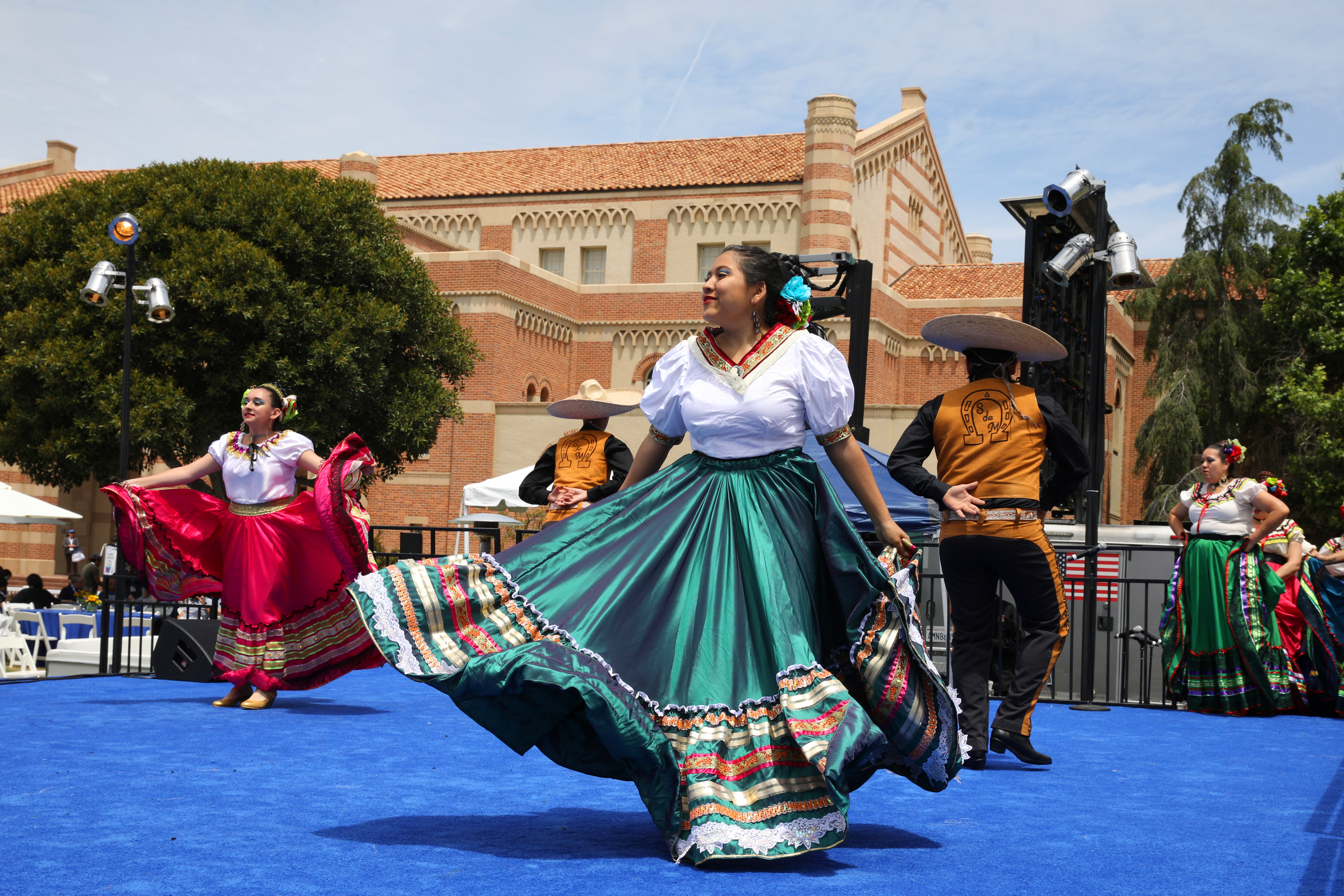 Reed Hutchinson/UCLA
A dance performance at the beginning of Alumni Day.

Lalima Hoq, who earned her master’s degree at UCLA in 2004, and Aaron Bernardin, who earned a bachelor’s degree in 1997, brought their 9- and 13-year-old sons, who were particularly impressed by the underground tunnel tour and the breakfast burritos.

For many others, one of the day’s highlights was the conversation among Block, Carnesale and Young, who delved into topics ranging from diversity to athletics to free speech.

“The campus has to be welcoming, and we spend a lot of time trying to make certain that this is a welcoming environment for all of our students,” said Block, UCLA’s chancellor since 2007. “If students are comfortable, supported financially and supported academically, they’ll be more successful.”

Carnesale, the campus’s chief executive from 1997 to 2006, addressed the recent decision by the College Board to add an “adversity score” to the SAT.

“UCLA for years has been taking into account a lot more than what your score on the SAT is, so this is not new and this will not be important for UCLA,” he said, adding that the change could help increase diversity at smaller institutions that can’t afford UCLA’s rigorous admissions reviews.

“It’s very important for UCLA to have a diverse climate,” Carnesale said. “It’s more important for our society as a whole.… We will face an enormous problem if the classes become more and more divided.”

Addressing a question about the cost to attend college, Young noted that tuition was significantly less when he led the campus, from 1968 to 1997, but emphasized that there are programs today to ensure that families earning $80,000 or less don’t pay tuition, and that many middle-class families pay on a sliding scale.

“In some ways, it’s better today than it was in 1975,” Young said. “What we need to do is continue to ensure that it is affordable — not that it’s cheap.”

The chancellors also were asked what they thought people might be saying about UCLA in another hundred years. Carnesale imagined how technology would change higher education.

“They’ll look back at this as, ‘Can you imagine the way they educated people at that time? They gathered them all together in a big room. Can you imagine?” Carnesale said. “So I hope they will look at us and think, ‘Look what we’ve become.’”

Block envisioned UCLA having grown well beyond its current geographic footprint. “I hope 100 years from now we’ll celebrate the success of all six UCLA campuses,” he said. 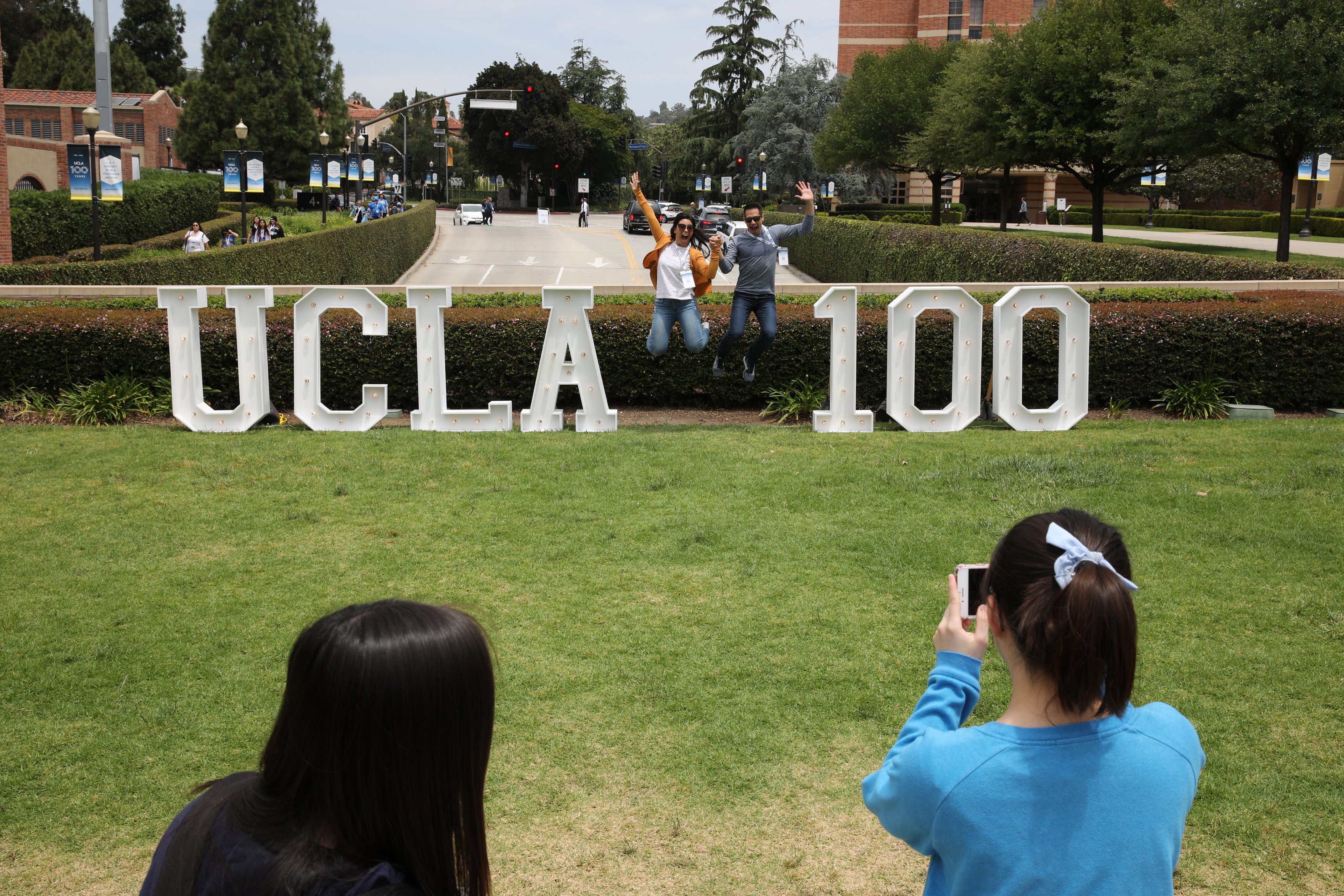 At the session on social justice research, directors of UCLA’s four ethnic studies centers held a wide-ranging discussion beginning with an acknowledgement of the Tongva people as the traditional caregivers of the land. The panelists emphasized the importance of including students and the community in research, and Kelly Lytle Hernandez, director of the Ralph J. Bunche Center for African American Studies, noted that the Bunche Center began a paid fellowship last year for graduate and undergraduate students to engage them one-on-one with faculty research projects.

“Research is the core job of the University of California,” she said. “Remember, the community college system is about access…. The Cal State system is about extraordinary levels of teaching. … The University of California is the people’s research center. That is what we do here, and we have to get our students — our students of color in particular — engaged in that project.”

Karen Umemoto, director of the Asian American Studies Center, said the centers have had an enormous impact, far beyond UCLA, in their 50 years of existence. “Fifty years ago we didn’t even have research projects on communities of color,” she said. “Now we’ve trained so many people over the last 50 years that a lot of those people have set up research arms or positions within a whole array of community organizations.”

On aging and time

The Alumni Day audience also was treated to a session on aging well, led by Alan Castel, a UCLA psychology professor. Castel described studies showing that walking regularly can reverse the effects of aging on the brain, fall-related injuries can be reduced by standing one-legged on each leg for one minute a day, and learning a new language can reduce the risk of developing dementia.

During the 100th-anniversary themed TEDxUCLA, an all-star lineup of UCLA and guest speakers considered the subject of time. Guests were lined up outside Royce Hall before the program began and flooded the auditorium as soon as the doors opened.

The first speaker, Jill Seubert, a deep space navigator at the NASA Jet Propulsion Lab, explained the complexity of tracking a spacecraft through deep space. She likened it to trying to guide an object from Los Angeles to Times Square, and having to hit a target the size of a quarter — with only a couple of opportunities to readjust.

“A tiny fraction of a second can make all the difference,” she said.

William E. Simon Jr., co-founder of UCLA Health Sound Body Sound Mind, spoke about his belief that physical education in schools should be a fundamental right, pointing out that physical activity has been linked to better test scores and the ability to retain information better.

“Even a moderate amount of exercise goes a long way,” he said.

Simon said the issue is especially important for students in low-income neighborhoods, where there tend to be fewer safe play spaces and fewer opportunities for children to take part in organized sports.

Other speakers included UCLA physics professor Mayank Mehta, who spotlighted his lab’s work on virtual reality and its potential role in the treatment of mental disorders; Olympian and UCLA alumna Jordyn Wieber, who discussed her journey from gold medal-winning gymnast to a leader of the movement to expose sexual abuse in her sport; and Shawntel Okonkwo, a UCLA doctoral candidate who explained how systems of power affect those who are most marginalized in society.