“Morton’s leadership and philanthropy are testaments to his belief that the true measure of a life is not what you get, but what you give,” said UCLA Chancellor Gene Block at the medal ceremony. “The seeds he has planted for the future will indeed benefit generations to come.”

La Kretz recently donated $15 million, following a $5 million donation he made in 2017, to fund the renovation of the UCLA botany building, which was renamed the La Kretz Botany Building. The renovation, which is underway and scheduled for completion in 2022, will include a refurbished entrance and lobby, upgraded laboratories for teaching and research on botany and conservation, and a state-of-the-science class laboratory. UCLA is working with the firm CO Architects on the project’s architecture and design.

Prior to the medal ceremony, UCLA held a ribbon cutting ceremony for the botany building. There, Victoria Sork, UCLA’s dean of life sciences, praised La Kretz for his profound commitment to “plants, nature and the environment,” and to reminding others of their importance. Sork also expressed her appreciation for his commitment to teaching and research.

Among those attending the events were La Kretz’s daughters, Linda Duttenhaver and Margaret Blume. 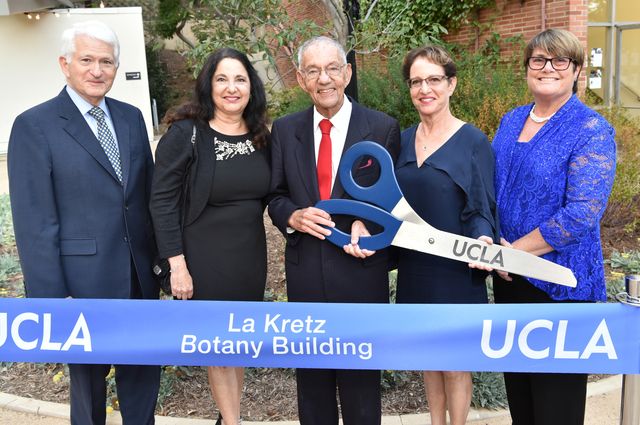 La Kretz is the founder and president of Crossroads Management, a real estate development and property management company.

His other previous major gifts include lead gifts toward the construction of La Kretz Hall, which houses UCLA’s Institute of the Environment and Sustainability; the La Kretz Garden Pavilion, which opened in 2017 as the new gateway to UCLA’s Mildred E. Mathias Botanical Garden; and the La Kretz Center for California Conservation Science, which is administered through the IoES in partnership with the National Park Service.

The UCLA Medal is bestowed on those with exceptionally distinguished academic and professional achievements whose body of work or contributions to society illustrate the highest ideals of UCLA. Previous recipients have been national and international leaders in government, education, science, industry and the arts, Nobel laureates, and men and women who have advanced UCLA’s development into one of the world’s preeminent universities. Honorees include President William Jefferson Clinton, UCLA alumnus and Los Angeles Mayor Tom Bradley, basketball coach John Wooden, U.S. Supreme Court Justice Harry Blackmun, and UCLA alumna and astronaut Anna L. Fisher.