You can’t see the faces of most of the men in the backs of the pickup trucks. It’s mostly just their bodies and the tops of their heads, some covered by baseball caps or hardhats. When you can see a face, the man is lying down eyes closed. Without a view of their eyes, these men can feel anonymous.

But focus your gaze and study the 12 framed photos arranged in three rows of four. Take note of the deeply tanned hands, the dirt and grime on the men’s clothes, and it hits you. They’re only anonymous when we choose not to see them. And not just “we” visitors to the “On Their Backs: Latinx Labor in the US” art exhibition at the Fellows of Contemporary Art gallery in Los Angeles, but “we” Americans who willfully ignore or unconsciously fail to notice the people who do so much of the work — fruit pickers, construction workers, housekeepers, gardeners, nannies — that makes modern life happen.

That moment of realization, which might be accompanied by personal discomfort, is the point of the show, says Erika Hirugami, exhibition curator and UCLA alumna. Hirugami is the founder of CuratorLove, an organization that curated the show with the gallery and the UCLA Chicano Studies Research Center, to spotlight the works and ideas of Latinx artists like photographer Alejandro Cartagena.

“You get these wonderful shots of all these people after a really long day’s work or about to go work for who knows how many hours,” Hirugami said of the photos, taken from a bridge near the border in Nuevo Laredo, Mexico. “People coming in to make our cities pretty. We don’t know their faces. We don’t know where they’re coming from. They bring labor, get paid very little, go home and no one’s going to acknowledge it.”

Narsiso Martinez’s piece is a mixed media painting and illustration on unfolded rectangular cardboard with holes in it. The image depicts a female farm worker on her knees, seen from behind and in great black and white detail, in the fields with a large mission-style building in the background. There’s writing in the image that says:

“What was interesting to me about his work that most people don’t know is that he was a farm laborer,” Hirugami said. “All of the people in his depictions are his friends. Even the medium he uses. This is a box from one of the companies where his friends work.” 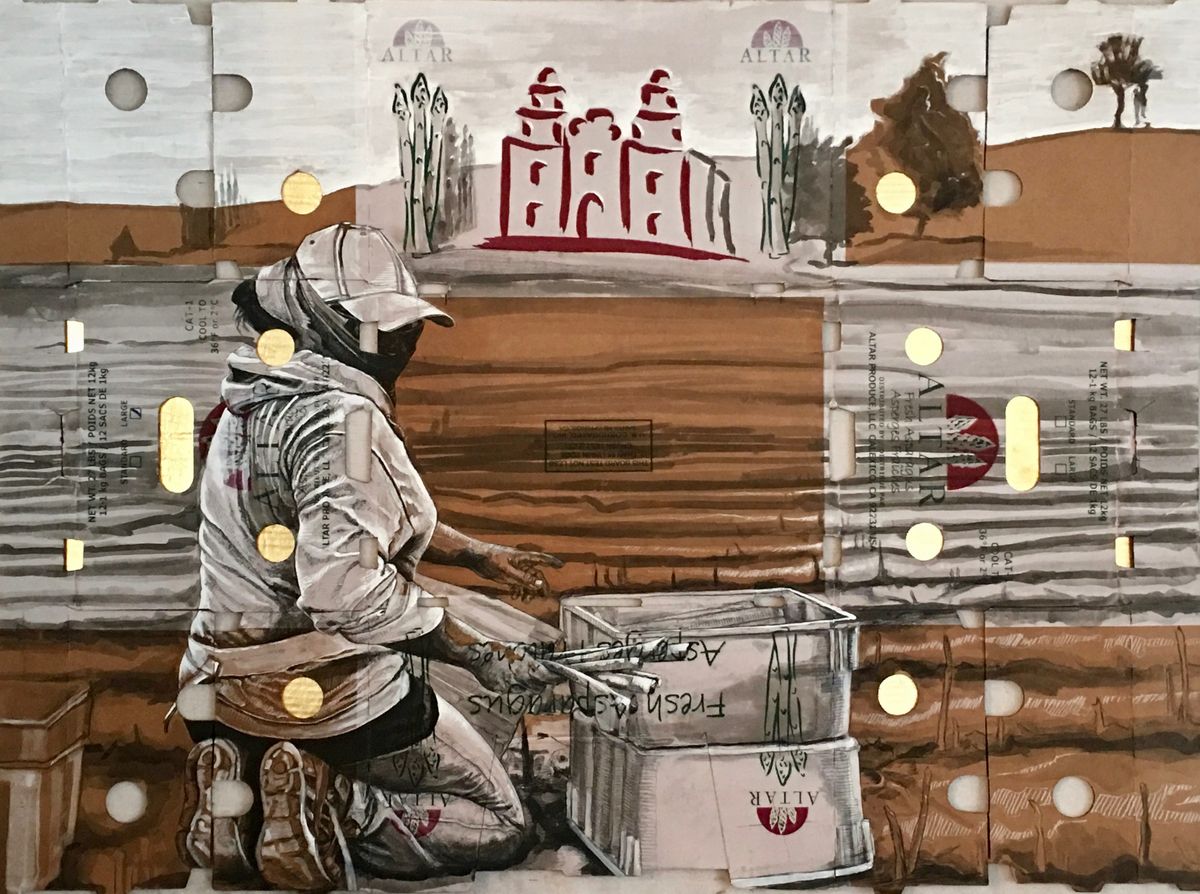 Courtesy the artist and CuratorLove
Narsiso Martinez’s piece in the “On Their Backs: Latinx Labor in the US” exhibition
.

By featuring works that portrayed the struggle and also the dignity of these people who toil in the shadows, Hirugami wanted to humanize data and statistics about exploitation in low-wage jobs. For example: foreign-born Latino workers are paid only 82.4% of what their native-born counterparts are, according to statistics from the Bureau of Labor Statistics.

“My exhibitions try to analyze a problem, explain the core of the matter, and do so utilizing art,” said Hirugami, who graduated from UCLA in 2014 and who will return to Westwood this fall to begin studying for her doctorate in Chicano and Chicana studies.

All of the works on display in that gallery were created by “dead white artists,” while everyone who handled the pieces as they were delivered to the gallery and would pack the works for shipping once they were purchased was Latinx.

“It was a great learning environment, but it was problematic to me because all of our employees in the back room were Brown but they were not allowed to walk in through the front door when they came in,” Hirugami said.

That experience fueled her purpose to start reshaping the art world, in which currently 85 percent of the pieces in museum collections are by white men.

To accomplish her goal, Hirugami knew she needed more education and a larger network. So she pursued her master’s degree in art business at Sotheby’s Institute of Art, where she conceptualized ways to bring more equity to the art world. There had to be a way to divert some of the massive amounts of money in the for-profit world of art collecting and sales to non-profit arts organizations and institutions that have missions of increasing representation and diversity in the art world.

“The director of the program said, ‘That’s brilliant but you can’t do that,’” Hirugami said. “I said, ‘Yeah, I can. Give me a minute.’”

After 18 months of networking at conferences and pitching her idea to whomever would listen, Hirugami found a backer at one of the museums where she used to work. In 2016, Hirugami collaborated with the museum and a gallery on a show that resulted in funding scholarships for 70 students to learn about art and museums.

“This is a viable thing that’s working,” Hirugami said. “Let’s make this happen all around.”

And thus was born CuratorLove, which partners with art professionals across the globe on a wide variety of endeavors, including: directing artist studios, publishing books, producing exhibitions, hosting conversations, launching art spaces and conducting research, like for the Fowler Museum at UCLA. Since opening in 2015, CuratorLove, whose ranks are filled with Hirugami’s friends from her time at UCLA, has expanded to six countries.

For Hirugami, who is half-Japanese and half-Mexican, her work has deeply personal roots. Growing up in Guadalajara, her grandfather ran an art collective. When she moved to the United States at 17, it was intended as just a visit to see her mom, who was living in Los Angeles. But then she stayed longer and graduated from high school, got married, divorced, got a job, and while studying business at Los Angeles Valley College also picked up a degree in art history. Then she transferred to UCLA, where as a 28-year-old she felt out of place but lucky to find a chosen family in other transfer students and faculty and staff mentors.

“I was freaking out my first quarter not knowing what I was doing. But I had great advisors who — even though every day I felt like ‘I don’t belong here’ — made UCLA feel like a space for me,” she said. “Here I have a family that will look out for me. I could not do stuff like this had I not gone to UCLA.”

When she starts her doctoral studies in the fall, Hirugami said that her focus will be the art practices of undocumented artists of color. She said her hope is to help develop policies that could help these artists have sustainable careers. In fact, it was a conversation with one of her closest friends, who is an undocumented immigrant and photographer, that catalyzed the idea for the “On Their Backs” exhibition. After losing his job as a construction worker, he wasn’t able to make a living with his photography. So she started talking to other artists about the problems they face as Latinx artists and immigrants.

“When I started having this conversation, in the back of my mind I knew what it would look like as a visual concept,” Hirugami said. “Their work shined a light on labor politics that I wanted to present and force the gallery world to confront and listen to.”