In a speech at Royce Hall that highlighted UCLA’s second annual Humanities Forum on Diversity, Race and Immigration, Juan Felipe Herrera reminisced about how the campus helped shape his worldview as an artist during the civil rights era and offered meditations on diversity.

The former U.S. poet laureate returned to his alma mater Oct. 30 to accept the UCLA Medal, the campus’s highest honor.

“The kind of society we want to build is built this way — the way we are today,” Herrera said. “It is built by coming together in a common purpose, a heart purpose, to build that society that we have longed for, that we are trying to protect, that we don’t want to lose. Sometimes we get a little nervous and almost hopeless — until we come together.”

Herrera, poet laureate from 2015 through September 2017, was the first Latino person to receive that honor. He also was among the first Latino students to attend UCLA on scholarship, and he earned a bachelor’s degree in anthropology.

The UCLA Medal was presented by Chancellor Gene Block, who praised Herrera’s achievements as both an artist and an activist.

“Poetry, of course, is a universal language,” Block said. “It is the language of intellect. It brings light and enlightenment to the world and gives us a vital means of understanding the lives of so many Americans, and particularly those who live in different worlds than those around us.”

In his talk, Herrera drew from his own experiences from different worlds, relating stories of people he encountered as he traveled the country as poet laureate. 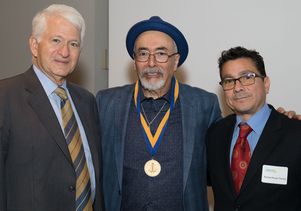 He remembered first arriving on campus in 1967 carrying what he described as “Chicano luggage” — a borrowed suitcase in one hand and a brown cardboard box tied with rope in the other — and mistakenly making his way to the hospital’s maternity ward before finally finding his new home in Hedrick Hall. He reminisced about the jazz, experimental theater and dance performances that informed his work as a poet, and he recalled losing his voice after shouting his poetry on the hill outside of Kerckhoff Hall during a free speech rally.

“This was my training ground, and little by little, I started to write more, do more performances with musicians and theater and dance groups,” he said. “We were doing something new at the time and it involved all of us. It was like being in a whirlwind of courage, inspiration, purpose and vision, with the current flowing through us. But it was never for me, or for us. It was always for others, those in pain, those suffering, those without resources.”

During a brief speech, Herrera offered 13 meditations on diversity, which ranged from ruminations such as “Diversity is not outside of you. Everyone is a part of it, everyone has to be a part of it” to rallying cries like “Diversity can be created and marginalized but not eliminated.”

Some of the meditations were more foreboding. “Diversity is emptied of its rich meanings,” he said, “when suctioned into the day-to-day absurdity of corporate agendas and in the interest of buying and selling and projects of advertising or casting in order to appear global.”

Prior to the medal ceremony, Herrera met with a small group of UCLA writing students in an event hosted by English professors Rafael Perez-Torres and Fred D’Aguiar.

Herrera read along as the poets read aloud their own work. He praised their use of architecture and language, and offered gentle advice and encouragement.

“There should be a little mad science in your poem,” he said. “That’s always good.”

He also commended the young artists for the powerful questions they raised in their work.

“I thought we were going to have a workshop here,” he marveled. “I didn’t know this was going to be a philosophy class, or a yoga class, or an ashram or a voyage under water into the body. But it was.”

The humanities forum, which explores themes of diversity, race and immigration, was inaugurated in 2016, when the speaker was former UCLA professor Valerie Smith, now the president of Swarthmore College.

“We’ve chosen and will continue to choose people who are prominent leaders in the art of thinking, seeing, talking about change,” said David Schaberg, dean of the humanities division of the UCLA College. “Diversity is our goal. Our place as a university is to represent, in our configuration of intellectuals, the community that surrounds us.”