During the 2016 Olympic Games in Rio, American gymnast Madison Kocian was part of the nation’s much-loved “Final Five,”  named in honor of retiring coach, Martha Karolyi.

Now as a member of UCLA’s incoming class, the two-time Olympic medalist is joining UCLA’s “Freshman Four,” a squad of athletes who competed in Rio this summer and are poised to become Bruins this academic year.

Collectively, the four first-time Olympians, three of whom are medalists, represented two nations and came home with four medals in gymnastics, soccer and water polo.

Kocian, a gold and silver medalist who was the first Bruin student-athlete to stand on the podium in Rio, is being joined by Maddie Musselman, who captured gold in water polo with Team USA, and Jessie Fleming, a member of Team Canada’s bronze-medal-winning soccer team, this fall. This winter, Mallory Pugh, 18, the second youngest Olympian in the history of U.S. women’s soccer, will also start classes.

Each will be competing for the Bruins in their respective sports, and each is looking forward to immersing themselves in the student experience by taking classes and enjoying the opportunities that await them at UCLA.

They are among 9,700 new undergraduate students attending UCLA this year. Fall classes commence Thursday, and Kocian, Musselman and Fleming are ready.

Manage your time and stay positive

Kocian, 19, said she chose UCLA because of its reputation as one of the world’s leading universities and its standing as home to one of the nation’s best gymnastics programs.

A day after arriving at UCLA, Kocian was already hard at work in the gym with her new teammates and Coach Valorie Kondos Field, who has coached the Bruins to six NCAA national championships and 13 PAC-12 championships over the past 23 years. 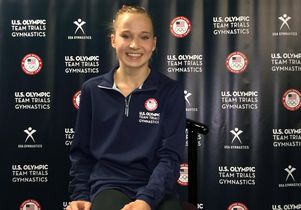 UCLA
Madison Kocian has been training in the gym with her new UCLA teammates and coach Valorie Kondos Field, who has coached the Bruins to six NCAA national championships.

Kocian said that, although she is ready to help UCLA win another national title, she is equally excited to resume her life as a student.

“I deferred my enrollment at UCLA for a year so I could train for the Olympics,” said Kocian, who earned a gold medal in the women’s team competition and a silver medal on the uneven bars. “I’m looking forward to the balance of school and gym — not gym 24-7 like I’ve been used to for the past year and a half. I think it will be something different, something challenging, but I’m looking forward to it.”

Although she has yet to declare her major, Kocian said she is interested in becoming a pediatrician.

The gymnast said she plans to put her time management skills to good use as she transitions back into student life. Being prepared and not procrastinating have helped her keep stress levels in check as an athlete and now as a student. As an elite athlete, she said she also recognizes the importance of maintaining a positive attitude, regardless of whatever challenges life may present.

“Before a competition, I keep positive thoughts in my head. You can transfer that same mindset into taking a final. … It’s important to know that you’re prepared, that you’ve studied and that you’ve done everything you can to be your best.”

Fellow freshman and Olympic athlete Maddie Musselman, a life sciences major who aspires to work in the medical field, is no stranger to the UCLA campus. Her sister, Alex, played water polo as a Bruin for four years before graduating with a degree in sociology last June.

“I got an inside look at UCLA before coming here, and I already felt like part of the team and part of the UCLA family,” said Musselman, 18.

Like Kocian, she is excited to compete for the Bruins, meet her professors and classmates, and start her new life as a college student.

I love school,” said Musselman, whose time management skills helped her successfully complete her remaining online high school classes while she was training for Rio.

“UCLA offers not only the academic lifestyle that I want, but sports here are competitive, and the culture of UCLA is something I want to be a part of,” said Musselman. “It is a perfect fit for me.”

Musselman said she believes the resiliency she has developed throughout her years as a water polo player will help her become a successful university student.

“Ever since I've started playing sports, I've experienced failure, especially at the highest level. And being in college won't be easy. In sport I've learned to be resilient, fight back and want to succeed. Remaining resilient and working to be better than I was the day before — those are qualities that are going to be important for me.”

Learn from mistakes, then move on

Resiliency and perseverance are also qualities that Canadian midfielder Jessie Fleming, 18, knows well. Her team went into the Games ranked 10th in the world and left Rio with a bronze medal. Fleming, who helped set up the Canadian team’s game-winning goal in its bronze-medal game against Brazil, has already racked up five goals and one assist for the Bruins in their first four games this season. 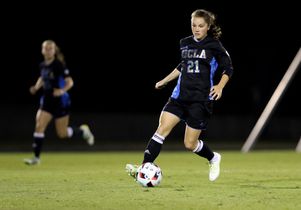 Courtesy of Rand Bleimeister
Freshman Jessie Fleming, now playing for the Bruins, helped set up the Canadian team’s game-winning goal in its bronze-medal game against Brazil.

“Here at UCLA, I want to definitely win national championships, and, along the way, become a better player and enjoy an international style of play,” said Fleming.

The materials engineering major is also eager to start classes. She has a particular interest in green architecture and designing materials and products using new technologies, including 3-D printing.

“Growing up, I was always interested in architecture and the environment. … I was attracted to UCLA’s culture of excellence across all disciplines of academics. And because there’s flexibility and creativity within my chosen program, I can go my own way and explore what I want to do and where I can take my degree.”

She said that time management and communication are tools she will use to excel as a student-athlete.

“That’s the great thing about universities,” Fleming said. “They have support systems in place academically, athletically and psychologically. It’s important when you’re stressed not to be afraid to ask for help. I think that’s something a lot of athletes aren’t necessarily good at because we want to be independent, and we think we can do everything on our own.”

Fleming said it’s also important for athletes and students alike to learn from one’s missteps and not focus on things that can’t be changed. “Life goes on. You shouldn’t dwell on mistakes or losses or poor marks. Time keeps moving, and you can’t get stuck on the past. Just stay excited for the future while learning from the present. Just keep moving.”