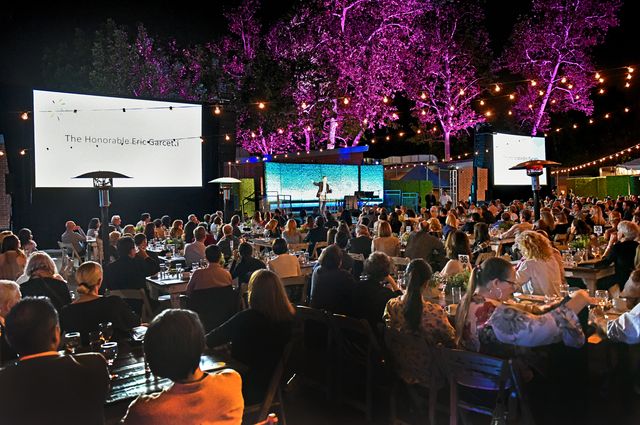 Two days after delivering his annual address on the State of the City at City Hall, Los Angeles Mayor Eric Garcetti returned to UCLA Lab School Saturday, April 22, to reminisce about “the most important educational experience of my life” before a gathering attended by his former kindergarten teacher, fellow alumni, parents, teachers, former teachers and alumni parents.

Garcetti, who graduated from sixth grade in 1982, came back to the school, formerly known as the Corinne A. Seeds University Elementary School (UES), for a special reception and dinner hosted by Principal Norma Silva and Marcelo Suárez-Orozco, dean of the Graduate School of Education and Information Studies, to launch a celebration of the 135th anniversary of the school’s founding.

Located on the northern border of the main university campus, the elementary school serves 450 students ages 4-12. Part of the UCLA Graduate School of Education and Information Studies, it functions as a laboratory for educational research and a resource for professional development for educators. 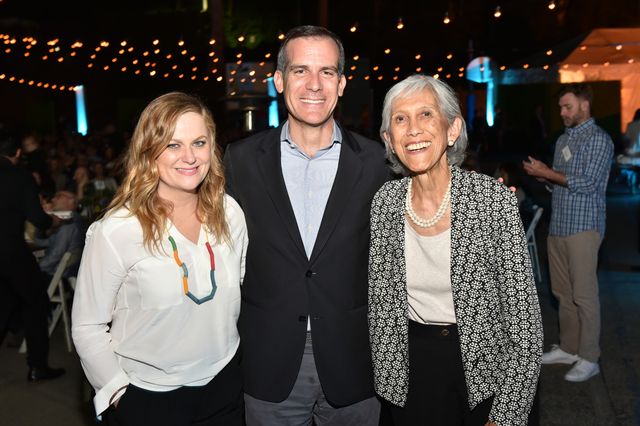 “Besides my family, it really made me who I am,” Garcetti said of the school after he was introduced to the audience by Karolynne Gee, his former kindergarten teacher. “UES did something so effectively that it is wonderful to see the spirit living on so many years later.

“It wasn't about teaching us, or telling us,” Garcetti explained. “It was about showing us and letting us discover. It was about overcoming difficult moments. It was about learning about cultures, but never telling us that we were learning something."

The mayor said he still remembers the sleepover he and his classmates had in the redwood forest that is part of the school grounds … “I remember to date the 78 mosquito bites I had that night.”

More than 650 alumni families, parents, teachers and former teachers, staff, and friends attended the evening event, emceed by actress, comedian and producer Amy Poehler and entertained by singer Idina Menzel, both of whom donated their time. A UCLA Lab School children's choir also took over the spotlight.

The event raised $350,000 for the UCLA Lab School Student Diversity Fund for scholarships. Among those who lent their support were Gelila and Wolfgang Puck, who donated the catering and helped transform the lab school campus into a farm-to-table retreat.

The lab school traces its origins to the fall of 1882, when the California State Normal School opened its doors on the site where the Central Library in downtown Los Angeles now stands.

The normal school, devoted to teacher education, included a children's school that eventually became the UCLA Lab School. The lab school has been on the UCLA campus since 1947. Today the diverse learning community researches how to maximize children’s learning potential to develop students’ love of learning, critical thinking, confidence, an appreciation of differences and an ability to adapt to an ever-changing world. The school shares these practices with educators across the city and around the world through site visits, workshops, conferences, presentations and publications. 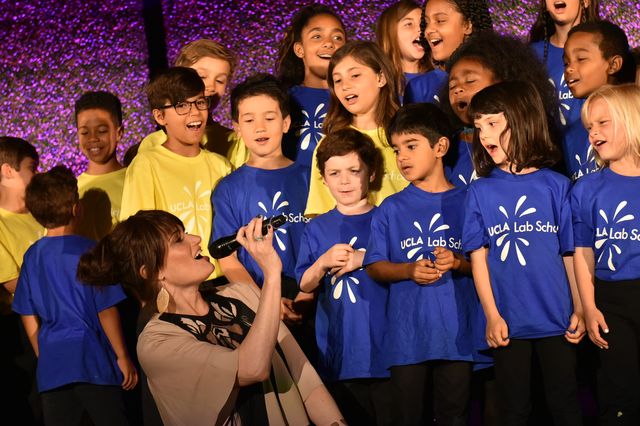