On Saturday, June 3, 300 Los Angeles artists, gallerists, collectors and arts leaders came together for the one-day UCLA Benefit Exhibition and Art Sale to support the renovation and expansion of the UCLA Margo Leavin Graduate Art Studios and raise funds for student support while also celebrating the importance of the top-ranked UCLA Department of Art to the cultural ecology of the city.

Building on Margo Leavin’s generous lead gift to transform the graduate program’s existing facilities, the event raised more than $700,000, including nearly $115,000 that will support Department of Art scholarships. The funds received are part of the $4.2 billion Centennial Campaign for UCLA, which is scheduled to conclude in December 2019 during UCLA’s 100th anniversary year.

The exhibition and sale featured work by faculty, alumni and friends of the department, including John Baldessari, Judy Chicago, Anne Collier, Robert Heinecken, Mary Kelly, Toba Khedoori, Barbara Kruger, Rodney McMillian, Dave Muller, Catherine Opie, Lari Pittman, Ed Ruscha and James Welling, among many others. 3Labs studios, located adjacent to the graduate art studios in Culver City, served as the setting for the exhibition and artists’ luncheon, which coincided with graduate open studios, a semi-annual event that invites the public into the studios of the department’s M.F.A. students.

UCLA School of the Arts and Architecture Dean Designate Brett Steele was welcomed to the community at the luncheon, which was attended by Chancellor Gene Block and his wife, Carol. Steele will formally join UCLA Arts as dean this August. 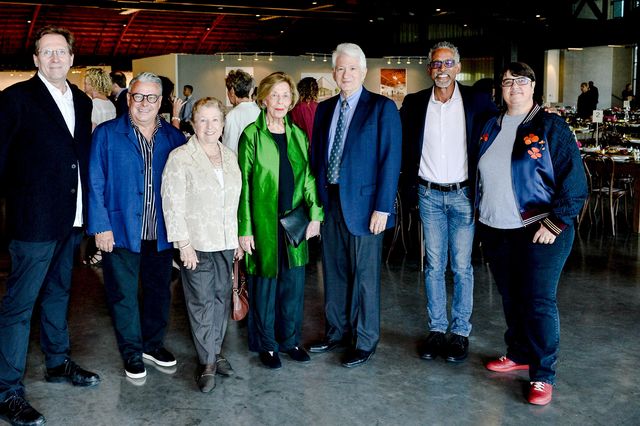