UCLA alumna Billie Tsien and her husband, Tod Williams, have been chosen to lead the team designing President Obama’s presidential library, to be located on Chicago’s South Side. It will be the first presidential library to be built in a predominantly African-American urban setting, according to the Chicago Tribune.

Tsien and Williams’ New York-based studio was chosen from more than 140 firms worldwide that submitted their qualifications to the Obama Foundation. Their firm will work on the project in partnership with Chicago-based Interactive Design Architects. 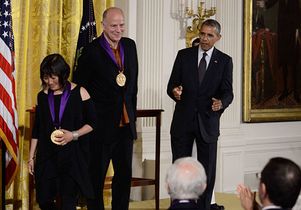 White House Press Office
Architects Billie Tsien and her husband, Tod Williams, were awarded the National Medal of Arts by President Obama at the White House in 2013.

Williams and Tsien, who graduated from UCLA with a master’s degree in architecture in 1977, are highly regarded modernists who built their reputation and their award-winning practice on designing such buildings as the Barnes Foundation art museum in Philadelphia, the Neurosciences Institute in La Jolla, California and the University of Chicago’s Reva and David Logan Center for the Arts.

Founded in 1986, the husband-and-wife architectural firm has primarily designed buildings for institutions, including museums and schools, and not-for-profits. They are currently designing the United States Embassy complex in Mexico City. Both Tsien and Williams recently served as steering committee members planning the celebration of the 50th anniversary of the Department of Architecture and Urban Design in the UCLA School of the Arts and Architecture.

“It is a joy, an honor, and a responsibility to create a place that reflects the optimism and integrity of the president and the first lady,” the couple said in a statement released by the Obama Foundation. “This has been a transformative presidency, and we will work to make a center that embodies and expands the Obamas’ vision.”

The library, which will hold the presidential archives, will include a museum focusing on the Obama administration, exhibits on major issues that arose during his tenure in the White House and space to host programs and events. Two sites, Jackson Park and Washington Park, are under consideration.

“Tod and Billie’s past projects display an incredible commitment to scale, craft and materiality, and their proposal demonstrated an equally genuine commitment to also carefully balance an understanding and respect for the history and potential of the South Side, the Olmstead and Vaux-designed park setting and Chicago’s overall architectural legacy,” said Robbin Cohen, executive director of the Obama Foundation.

This is not the first time President Obama has connected with Tsien and Williams.

In 2013 at a White House ceremony, Obama presented them with the National Medal of Arts for their contributions to architecture and arts education. “Whether public or private, their deliberate and inspired designs have a profound effect on the lives of those who interact with them, and their teaching and spirit of service have inspired young people to pursue their passions,” the moderator at the ceremony said.