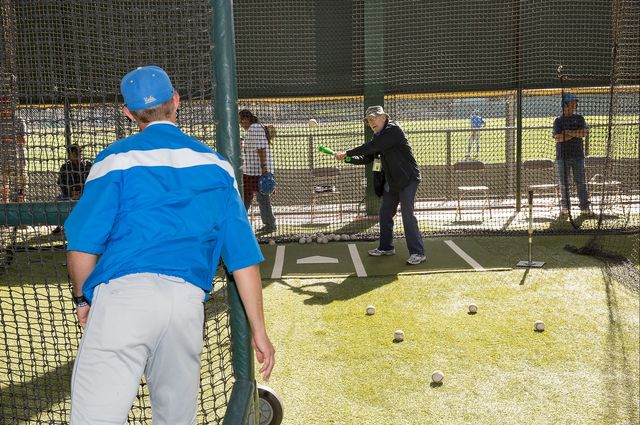 The UCLA baseball team offered hitting and fielding instruction to military veterans and hosted a barbecue at the team’s home field on April 15, a date celebrated nationwide as Jackie Robinson Day in honor of UCLA’s legendary alumnus.

Approximately 30 residents of the West Los Angeles Veterans Home watched the team practice, and some later took swings in a batting cage and on the field at Jackie Robinson Stadium. The veterans then enjoyed a barbecue with Bruin players, the coaching staff and UCLA Athletics administrators. 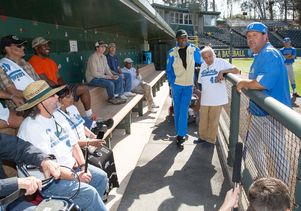 On Jackie Robinson Day, all Major League Baseball players wear Robinson’s number 42 to honor the player who broke the color barrier in 1947, earned Rookie of the Year and MVP honors, played in six World Series and won one title with the Brooklyn Dodgers. Robinson was enshrined in the sport’s Hall of Fame in 1962.

“Having a fantasy camp for our military veterans on Jackie Robinson Day is a great way for us to pay tribute to Jackie, who himself was a veteran, and the men and women of our armed forces who have so bravely served this country,” said UCLA head baseball coach John Savage. “Our team shares a special relationship with the veteran community and is also entrusted with carrying on Jackie’s legacy. So being able to celebrate the sacrifice both have made to make this world a better place is something I know our players will never forget.”

Nick Mastromatteo, a UCLA alumnus and resident of the veterans home, said he comes to the stadium regularly and encourages fellow veterans to take advantage of the access they are granted.

"Being a Bruin and an athlete, I do what I can to go to the stadium and drag others along,” said Mastromatteo, who competed in luge in the 1964 Olympics. “A lot of people here come from far away and have little contact with the community.”

Along with the baseball team, Rafer Johnson, a UCLA alumnus and 1960 Olympic gold medalist in the decathlon, was on hand to greet veterans.

In 2014, UCLA designated 22 facilities as the Jackie Robinson Athletics and Recreation Complex and retired his number 42 across all sports.

UCLA serves veterans in multiple ways, ranging from health care provided by its medical faculty and residents to research that enhances the way the military does business and on-campus support services for student veterans.