On April 27, 1965, UCLA freshman Daniel Johnson stood near the old Men’s Gym, squeezed in among nearly 5,000 people who turned up on campus to hear Dr. Martin Luther King Jr. speak at the base of Janss Steps.

“That was as close as I could get. I couldn’t see him, but I could hear him,” recalled Johnson of the moment 50 years ago. “It was the most impactful speech I have ever heard in my lifetime.” 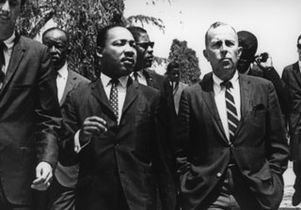 UCLA
In introducing Dr. King, UCLA Chancellor Franklin Murphy (above) said, "This is, for me, as I am sure it is for you, an extraordinary experience: when the legend becomes reality."

As one of the few black students in that predominantly white crowd, Johnson — a native of Alabama, product of a segregated school and son of a woman who refused to give up her seat on a public bus in Mobile — took King’s words about “loving one another and caring for one another” to heart. “His speech really helped me moderate my anger,” Johnson said, recalling that there was “a lot of good camaraderie” that day.

On Tuesday, King’s powerful address on African Americans’ struggle for freedom and human dignity will once more echo through the heart of campus when his “Segregation must die” speech is rebroadcast. Everyone is invited to gather at noon in Meyerhoff Park near Kerckhoff Hall. Representatives from the Afrikan Student Union (ASU), the UCLA Black Alumni Association, the UCLA administration, the Community Programs Office in Student Affairs and other organizations will reflect on that day when King’s vision was articulated so clearly.

Joining faculty, staff, students, alumni and supporters will be approximately 200 Los Angeles elementary school students, brought in by UCLA as a new generation to be inspired by King’s words. The civil rights leader delivered his speech a little more than month after the Selma-to-Montgomery marches for voting rights took place.

At 11 a.m. at Royce Hall, that milestone moment in civil rights history will be dramatized for 1,800 high school and middle school students, who will be transported to UCLA for a screening of the Academy Award-nominated movie “Selma,” directed by UCLA alumna Ava DuVernay. It will be, according to organizers, the largest screening of the film held on any college campus. If time permits, a Q&A with campus representatives to help contextualize the film will follow. At 7 p.m., the campus community is invited to see a free screening of “Selma” in Royce Hall.

The fact that 2,000 K-12 students will be participating in these events “is what gets me so excited,” said Angeles Echols-Brown, the founder and executive director of Educating Young Minds, a Los Angeles nonprofit learning center that has been helping inner-city students excel at academics since 1987. She’ll be attending the screening and, later that evening, be welcoming invitees to a VIP reception at Royce West Wing. At the celebration will be representatives of student groups, the Bunche Center for African American Studies, the UCLA Alumni Association, Student Affairs and others who helped make the day possible.

“I believe in legacies and that children of all ethnicities should know their history and what people went through during those times. It’s our responsibility to empower them with this information,” Echols-Brown said.

Being able to inform K-12 students about King’s work and his legacy is the reason why Janay Williams, a fourth-year biology major at UCLA with a minor in African-American studies, worked on the coordinating committee on behalf of ASU.

“These young students don’t get the whole story about Dr. King,” said Williams, retention coordinator for ASU. “They mostly know Dr. King from his ‘I have a dream’ speech.” But many are not aware of the work he did after he gave that speech or about his progressive and revolutionary ideas, she said. “It’s important to help students understand who Dr. King was.” ASU hopes to partner with student government to commemorate the anniversary annually and provide educational programming around it, she said.

The coordinating committee of students, faculty, staff, alumni and community partners also hope to highlight “True Bruin” values and increase awareness of the role that UCLA Bruins have played in advancing a more equitable, inclusive and just society.

”Dr. King’s address was an historic event not only for campus but for the nation,” said Mick Deluca, assistant vice chancellor of campus life, who, along with Vusisizwe Azania, advisor in the UCLA Community Programs Office, helped bring groups together. “The organizers of our commemorative events are united in their commitment to connect both younger generations and future leaders, represented by our UCLA students, to the importance of Dr. King’s words, the voting rights struggle, the issues of today and UCLA’s values as an institution.”

For Neil Reichline, those values have been a part of his life ever since the then-freshman and Daily Bruin reporter heard King speak that day. As he listened to the civil rights leader talk about his goal to send at least 2,000 students from across the nation to register voters in the South, Reichline turned to the person standing next to him and said, “I’m going.”

And he did, recalled the fine arts photographer, who made at that moment the “most important and influential decision of my young life” that “helped shape who I’d ultimately come to be as a person.” When Reichline returned from registering voters in the South, “things looked different to me … I continued to be engaged in the struggle for human and civil rights throughout my time at UCLA and in life beyond college.”

King’s speech not only foreshadowed the passage of the landmark Voting Rights Act of 1965, but it also marked the beginning of an awareness among many UCLA students that one person could make a difference. King was presented with a check for $700 after UCLA’s history professors collected money from the crowd to help fund his SCOPE Project. That summer, SCOPE sent more than 20 UCLA students and faculty to the South to register voters.

In a letter to then-Administrative Vice Chancellor Charles E. Young, King expressed his thanks for the support he was shown at UCLA. “Such moral and financial support are of inestimable value for the continuance of our humble efforts,” he wrote. Of his visit, King said, “It was a rich and rewarding experience, and I shall cherish it as long as the cords of memory shall lengthen.”

Many who heard him in 1965 would very likely say the same today.

To read about how the UCLA communication studies department found a long-lost recording of King’s speech and made it available online, go here. With the release of “Selma” on DVD, Paramount Home Media Distribution announced today that it is sending every high school in the country a free copy of the film as well as study guides.