High in the mountains under clear dark skies, Shaneli “Wookie” Mirpuri loves reminding everyone at UCLA UniCamp about the joys of looking up. More than 100 miles away from the lights of Los Angeles, the skies above the kids attending the camp for low-income children dazzle with more stars than they’ve ever seen before.

“There are some nights that you walk through camp, and the stars are shining, and a kid sees their first shooting star because they’ve never been to camp before, and you hear them singing camp songs in the distance, like about penguins dancing, and peanut butter and jelly, and it’s just so pure and good,” she said.

For Mirpuri, moments like those crystallize why her work as an unpaid counselor at UCLA UniCamp, a student-run nonprofit, is so meaningful and fulfilling to the volunteers and campers. Everyone involved experiences that feeling of genuine goodness.

For 85 years, the week-long, sleep-away summer camp has served low-income Los Angeles-area youth by training UCLA students as camp counselors. For the 9-to-17-year-old campers, many of whom have had to grow up too fast, the packed week of activities like archery, canoeing, swimming, mountain biking, singing, crafting and an adventurous climb up a 50-foot tower is a break from the responsibilities and hardships they face at home. They spend a week listening to the rush of the Santa Ana river and living in open-air cabins in the San Bernardino Mountains.

One of Mirpuri’s favorite camp memories comes from her first week as a counselor. One of her campers, “Bubbles,” was delighted to learn how to make a Tiger’s Eye necklace, a tricky camp tradition. Every time she made another, Mirpuri would admire it and congratulate her. Bubbles told her at the end of camp that Mirpuri’s enthusiastic praise meant more than anything else at camp.

“That really stuck with me, because it’s something so small that I didn’t even think twice about doing it,” said Mirpuri, one of this summer’s session program directors, responsible for a week of camp. “You can really impact a person’s entire week just with a few words every day. That’s really changed my life the past three years, and it’s really made me more conscientious about what I’m saying, what I’m doing, how to be there for people.”

As generations of counselors have learned, how UniCamp changes them has always been just as much a part of its mission as how they have helped the campers.

“UniCamp totally changed my life. It’s the reason why I’m in public service,” said Sheila “Sam” Kuehl, currently a Los Angeles County supervisor who served as a UniCamp counselor from 1958–61 and as site director in the 70s. Kuehl is a former actress and longtime California politician, known for promoting anti-discrimination laws and gender equality. “Something in you is very moved and satisfied by making something happen better for someone else.”

Her first week as a counselor, Kuehl had eight girls in her care. The girls loved the activities, but they also felt homesick, woke Kuehl up in the middle of the night for comfort, and sought her constant attention (then and now, counselors don’t expect a full night’s sleep or a shower every day). 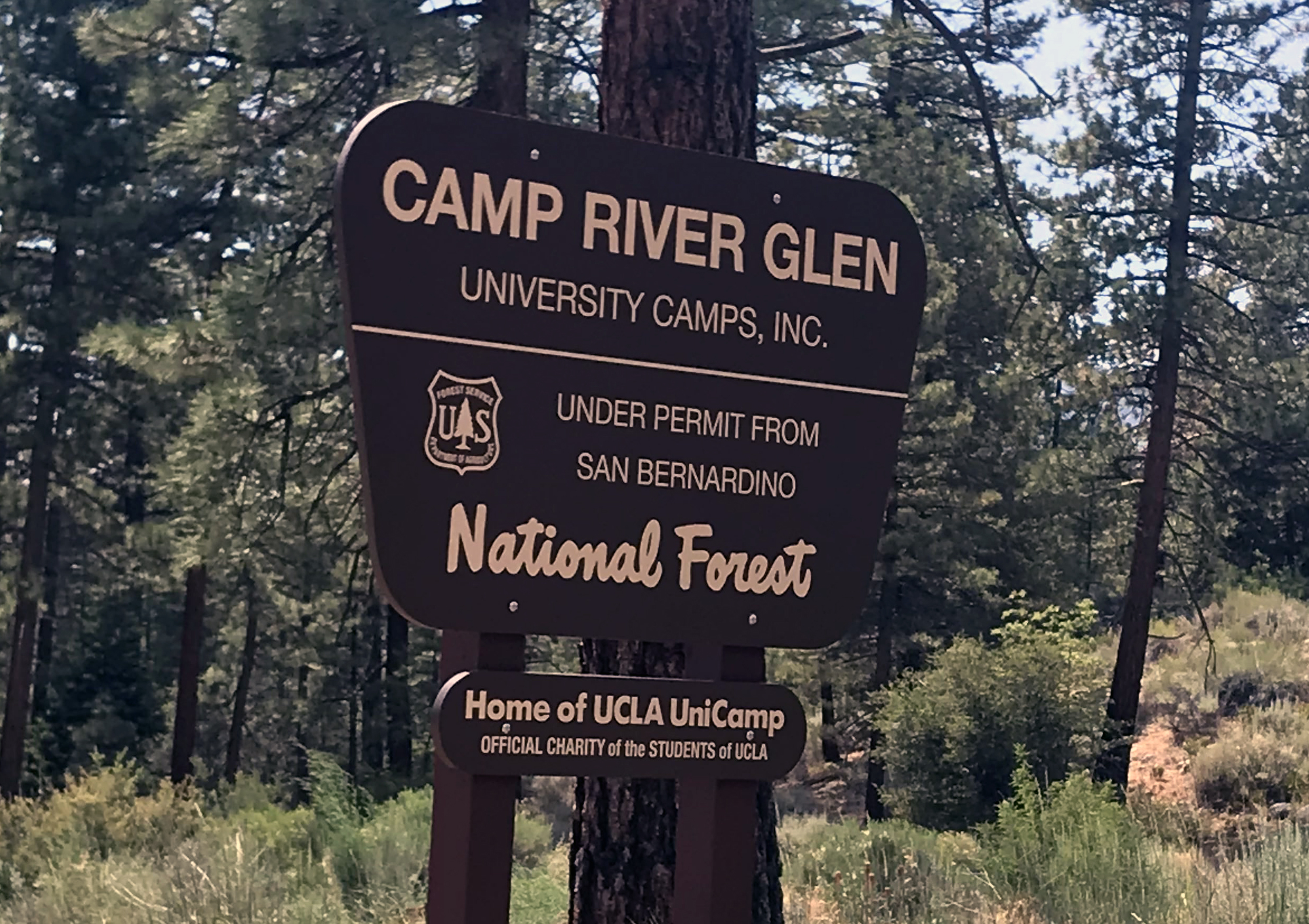 “I grew up so much in the four years that I was at camp, and made some of the most important friendships of my life,” Kuehl said. She and other former counselors now co-own a cabin where they vacation near UniCamp.

“We thought that UniCamp was for the kids,” Kuehl said. “It was also about our development.”

For many of the campers, it’s their first overnight experience in the forest and their first friendly connection to college students. The student-run program built up a slew of traditions, from rechristening everyone with camp names to draping each other in “Woodsey bling” yarn crafts.

“I like how everything’s set up,” said Ray “Android” Moore, a 10-year-old first-time camper. “I really don’t like the bugs, but I like the trees and rocks and pinecones. I like being in nature and playing ukuleles.”

In between activities, the UCLA counselors offer unconditional positive attention to kids who crave comforting. For the youngest campers, there’s literal hand-holding, bandages and hugs. For the older campers, the counselors lend a sympathetic ear to stories about bullying and other problems and become sounding boards for deep conversations about life.

Forging those deep connections helps more than the kids. Counselors look back and realize the experience shaped their character and defined their course in life. For campers who become counselors, each passing down UniCamp’s culture to dozens of new campers, it’s an illustration of how the camp shares UCLA’s value of generosity on an exponential scale.

UniCamp began in 1934 during the Great Depression when students participating in an annual food drive through UCLA’s University Religious Conference felt the urge to do more for local families. Undergrads raised money and in the summer of 1935 they hosted two 10-day camp sessions in Big Pines, 95 miles from Los Angeles.

In 1988, UniCamp outgrew the University Religious Conference and incorporated as a separate charity. Today, the tradition continues at Camp River Glen in the Barton Flats area near Big Bear. Aside from student volunteers, UniCamp has only four full-time paid staff. Students run UniCamp independently of UCLA, and they are the force that made the nonprofit into a tradition spanning nine decades. As UCLA marks its 100th birthday, the students who run UniCamp embody the university’s highest ideals of service to the community, demonstrating one of the ways that a UCLA education goes beyond books and lectures to include the experience of contributing to society.

“Since 1934, UCLA has had students who saw a need and addressed a need,” said Wally “Pops” Wirick, who recently retired after 20 years as executive director of UniCamp. “Students here are problem-solvers. They don’t just want to study and get good grades. They want to solve problems and make a difference now.”

The counselors’ shared discovery of the deep fulfillment that comes from generosity has built a multigenerational community of “Woodseys” who have become an enormous chosen family — and in some instances literal family.

Martin “Sky” Mai, now the development director, started as a camper. He got into UCLA, became a counselor, and fell in love with another counselor. At their wedding, four of the groomsmen were friends from UniCamp. “We’re all rooted here.”

By the numbers, the influence of UniCamp is immense. UniCamp estimates that they have served 60,000 low-income campers and 15,000 volunteers. Notable alumni volunteers include Kuehl, “Fresh off the Boat” actor Randall “CareMoose” Park; former Los Angeles City Councilman Joel Wachs, former Los Angeles Superior Court Judge Raymond Cardenas, and Sukey Garcetti, the mother of the current Los Angeles mayor. Among the student founders were Tony Berardo and Olympic medalist James LuValle under the guidance of staffer and socialite Adaline “Grandma” Guenther.

Compared to neighboring camps that run up to $1,000, no one at UniCamp pays more than $300, and more than half of UniCamp kids attend for free, including all foster children, who are roughly one third of campers.

After eight decades, UniCamp feels timeless and inevitable, but the camp has overcome daunting obstacles. World War II made it hard for the camp to stock food, and the military draft during the Vietnam War made it hard to recruit counselors, according to Wirick. UniCamp lost a major fundraising source when UCLA’s Mardi Gras celebration, a 50-year tradition, fizzled in 1995. Today, each volunteer raises about $450 to subsidize the younger campers, and sometimes more for specialty programs. Running the camp for a week costs about $100,000. Roughly 1,000 kids and 350 counselors participate every summer in one of the six-to-eight sessions.

In 2015, a forest fire damaged UniCamp and several neighboring summer camps. This year, a flash flood swept through camp. Generations of UniCamp alumni caravanned up on weekends to repair $35,000 in damage, lending the recovery a reunion-like atmosphere, said Mai. That dedication is what keeps UniCamp afloat.

Among the counselors are many former campers. Jessica “Nyx” Hernandez, 23, has spent the last 13 summers at camp. This summer, the recent UCLA graduate was program director for the summer’s first week of camp. She credits her UniCamp counselors for giving kids like her the drive and skills to get into college.

“We wouldn’t really have that interaction with college students otherwise, especially from universities as prestigious as this,” Hernandez said. “Having that connection as campers, you see the counselors be goofy, be silly … You’re like, ‘I’m goofy, too. I’m silly, too. Maybe I can go to UCLA as well.’”

When she began applying to colleges, she asked her counselors what things they did growing up that made their applications stand out. They told her she already had the experiences to shine.

“Statistically, numbers are always stacked against low-income communities, especially as a first-generation Latina. Having that connection with my counselors really helped,” Hernandez said — she got into 11 of the 12 schools she applied to.

She and her brother, Erick, grew up without much money in the Sawtelle area of West Los Angeles, the same neighborhood that the first UniCamp kids came from in 1935. Erick followed in her footsteps: camper, UCLA student, counselor. 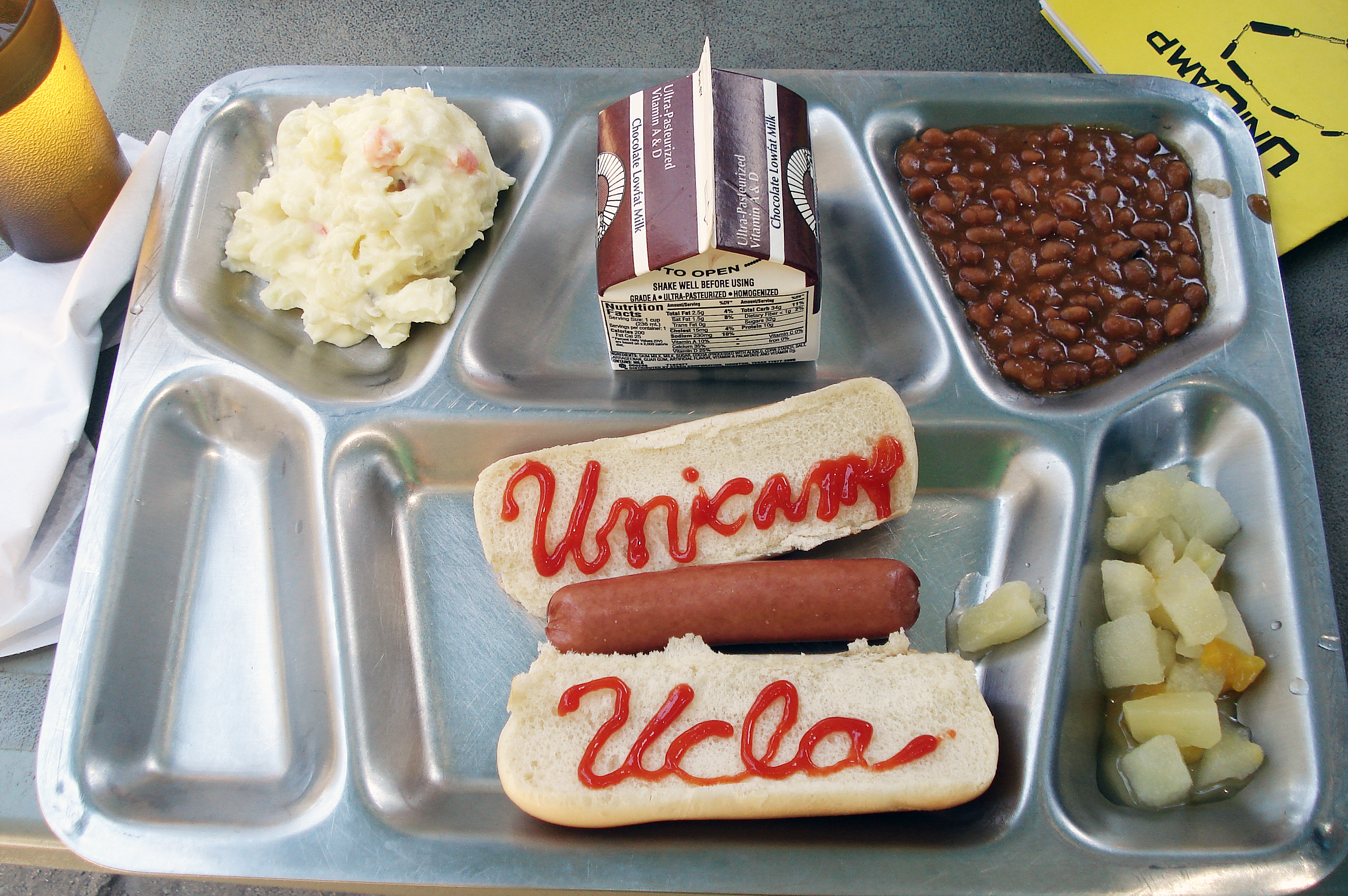 Any UCLA student can apply to be a counselor, and so can former campers over 18. Breena “Jelly Bean” Thompson, 17, has gone to camp since she was 10 and also plans to become a counselor.

“No matter what you’re going through, if you come up here and you’re up on the mountain and you’re with other people, you can just be up here and be yourself,” Thompson said. Having counselors who had her back was really important.

“Especially for me, that’s something I don’t really have,” Thompson said. It’s part of why she wants to become a counselor. “What they gave me was something really great. I think being able to give that back would be even better.”

For Brian “Rocket” Mahler, UniCamp became his family twice. Mahler, a counselor in the mid-90s, is now an attorney for Los Angeles County, representing the Department of Child and Family Services to protect children from abuse and neglect. When he first arrived at UCLA, UniCamp immediately made him feel at home. Over the years, he worked his way up to head counselor.

“It was the hardest thing I ever did, and it’s probably where I had the most growth,” said Mahler, who added that working as a counselor taught him leadership skills he uses in his career.

“I can lead an ice-breaker to get everyone talking. I can create short activities that make everyone feel like part of a community,” Mahler said. “Those are my campfire skills that I can take to any job.”

He worked with the current executive director, Jason “Mr. Woooo” Liou, to help build an alumni network so that former Woodseys can reconnect at events and support the camp. Mahler now has a different familial role — a member of the UniCamp Board of Trustees.

“I’ve never been more present in a moment than I was at camp,” he said. “Now that I’m on the board, I get to be part of camp for the rest of my days.”

Editor’s note: While reporting this story, the UniCamp counselors honored the staff of UCLA Newsroom with nicknames of their own. The story was written by Alison “Bingo” Hewitt and the video was produced by Hildie “Kitkat” Katibah and Sebastian “Seabass” Hernandez.