Seventy-five years ago, a UCLA landmark disappeared from view. In the summer of 1947, tons of dirt buried the sides of the Arroyo Bridge, an uneven ravine that once separated the east and west sides of campus. Photos from 1948 show a smooth expanse in its place.

Arroyo Bridge is now the answer to a trivia question: What was the first structure built on UCLA’s Westwood campus? Completed in 1927, the bridge was a necessity for trucks ferrying construction materials to the building sites for Royce Hall and Powell Library. It stretched 285 feet from what is now Charles E. Young Drive East to Portola Plaza, just short of the flagpole.

Courtesy of University Archives
Aerial views of campus from the south. The first shows some temporary structures from World War II, as well as the intact bridge and arroyo. The second shows the arroyo filled in and leveled, with Dodd Hall construction underway.

Stories about the bridge live on in campus lore. “The girl under the bridge” dates to 1931, when a groundskeeper discovered a makeshift bed of straw and planks. Lacking the money for lodging, a young woman was continuing her education by spending her days in class and her evenings in the library, showering in the women’s gym and sleeping under the Arroyo Bridge. When Dean of Women Helen Laughlin learned of this, she provided the student an emergency loan and a place to live. A women’s service organization then raised more money, and the student graduated with honors. 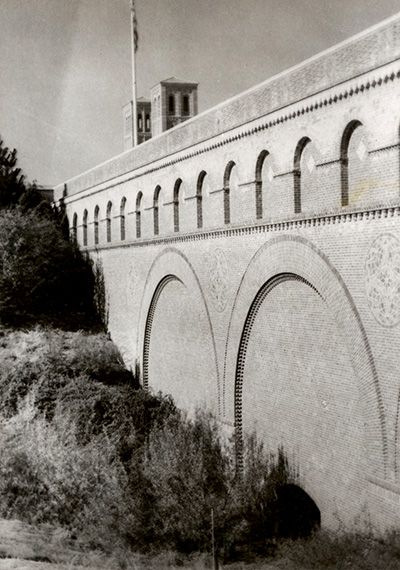 Courtesy of University Archives
A row of Romanesque “windows” lined each side of the bridge, above three massive arches and mosaic insets.

In 2016, a Chicano student retold that story on a blog, comparing the Depression-era student to the students of today who are forced to sleep in their cars. “This is important, because it cements the UCLA tradition of hard work and perseverance to an actual event,” the writer remarked. The same blog noted that during World War II, when the West Coast feared attacks via submarine, enough food to feed 50,000 people was reportedly stored beneath the bridge.

For 20 years, trucks, cars and pedestrians used the Arroyo Bridge. But the arroyo was considered wasted space on a campus with a postwar enrollment boom. One estimate found that filling in the arroyo would add 24 acres of usable land.

The 1947 yearbook reported the change in matter-of-fact terms: “Down goes the renowned bridge, and up goes the latest addition” — the Business Administration Building, now Dodd Hall. The 1948 yearbook was even more dismissive, noting that “the Gully” was almost gone. “Just keep filling it in, men, and end the menace.” 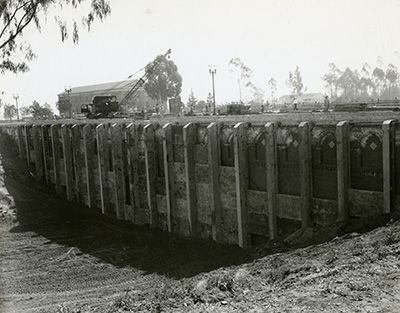 As decades passed and campus anniversaries brought vintage photos to light, nostalgia gathered around the memory of the bridge. In the early ’90s, knowing that the structure had been painstakingly cushioned by concrete retaining walls, campus architects proposed excavating the southern face to create an outdoor amphitheater. But funding was problematic, and the design concept was shelved.

The bridge is still functional and is regularly inspected to meet safety and earthquake standards. An unobtrusive door gives access to the space beneath the bridge and to UCLA’s underground maintenance tunnels. The six-mile tunnel system, like the brickwork of the bridge, is hidden from sight.