Arthur Ashe ’66 was a champion. Not just on the tennis court — where he won 33 titles and set world records — but throughout his life, as a warrior for justice who fought for the rights of oppressed people and devoted himself to social justice, health and humanitarian causes.

Ashe grew up in Richmond, Virginia, and was drawn to UCLA, he said, because it was Jackie Robinson’s university. He attended on a scholarship. In 1965, during his junior year, Ashe became the first African American to win an NCAA singles title. He went on to win the U.S. Open, the Australian Open and Wimbledon, among many other tournaments. He was among the greatest athletes ever to play tennis, an iconic cultural figure and the sport’s reigning champion for many years.

In the late 1960s and early 1970s, South Africa continually denied Ashe a visa to travel there to compete in the South African Open. He finally obtained the visa in 1973 and was the first Black man to play in the national tournament.

The visa gave Ashe permission to play in South Africa, but it did not mute his opposition to apartheid. Ten years later, he and singer Harry Belafonte founded Artists and Athletes Against Apartheid to lobby for sanctions and embargoes against the South African government. In 1985, Ashe was arrested outside the South African embassy in Washington, D.C., during an anti-apartheid protest, an event that helped focus international attention on that growing movement. He did so much to fight apartheid that when Nelson Mandela was freed after 27 years in prison and was asked what American citizen he would like to visit with, he said, “How about Arthur Ashe?” 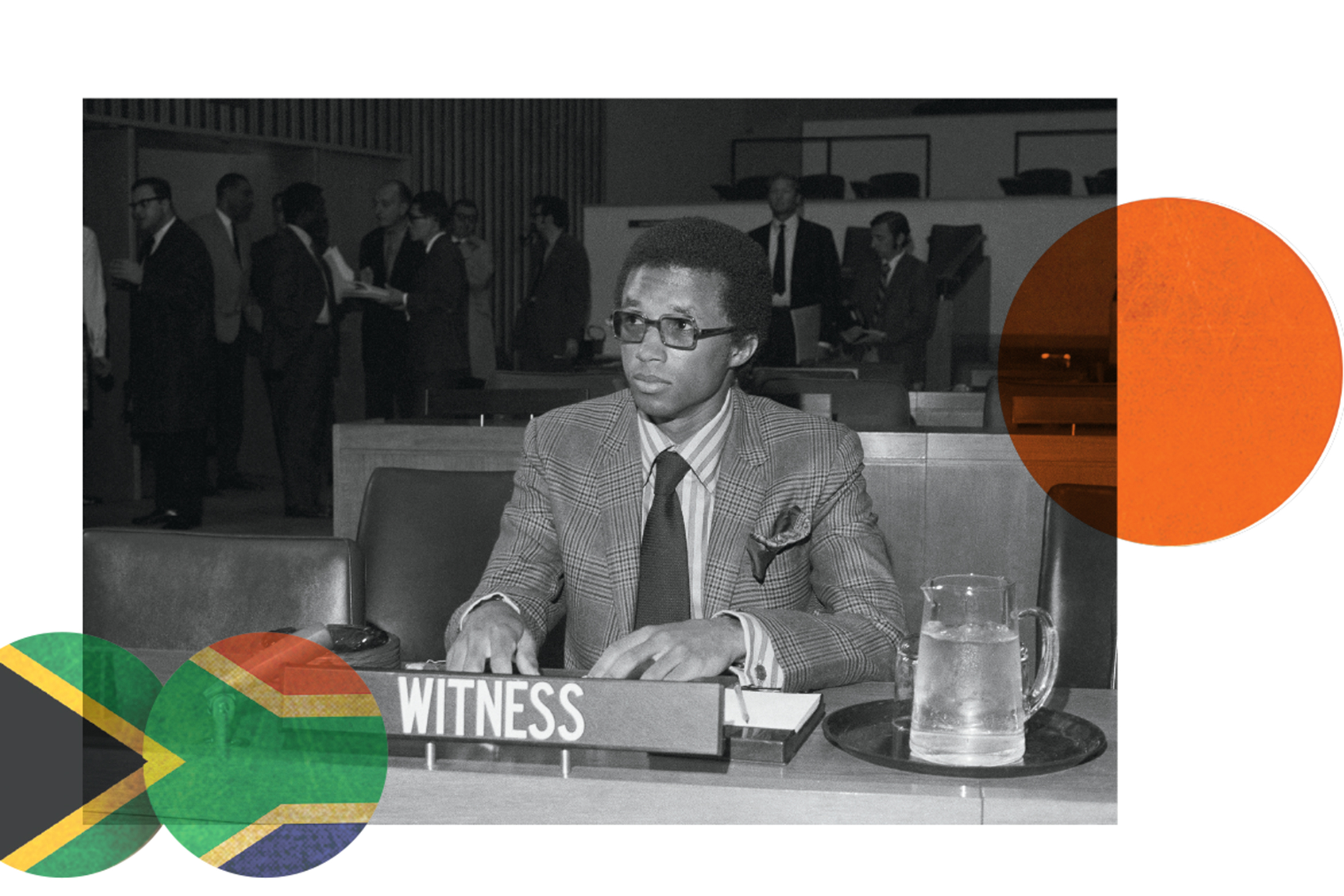 Bettmann / Contributor via Getty Images
Arthur Ashe at hearings of the United Nations General Assembly’s Special Committee on Apartheid in 1970. Ashe asked the U.S., Britain, France, Australia, Germany and Italy to expel South Africa from the International Lawn Tennis Federation, as well as to bar the country from participating in the Davis Cup.

The champion took on a different cause in 1983, when he contracted HIV through a blood transfusion following surgery. In 1992, he went public with news of his infection, prompting a deluge of public attention. Ashe used the spotlight to raise awareness of the virus and its victims.

“I do not much like being the personification of a problem involving a killer disease,” he said. “But I know I must seize these opportunities to spread the word.” He founded the Arthur Ashe Foundation for the Defeat of AIDS, with the goal of eradicating the disease. The nonprofit funded research into the treatment, cure and prevention of AIDS. On World AIDS Day, he spoke before the United Nations General Assembly, lobbying for increased funding for research and addressing the illness as a global issue. Although he’d retired from tennis in 1980, Ashe was named Sports Illustrated’s 1992 Sportsman of the Year because of his unshakable support for humanitarian causes.

Ashe died of AIDS–related pneumonia in 1993, at the age of 49. Just two months earlier, he had established the Arthur Ashe Institute for Urban Health, created to address issues of inadequate health care for urban minorities. To the end, he kept fighting for what he believed was right.

In 2008, Ashe’s widow, Jeanne Moutoussamy-Ashe, established the Arthur Ashe Learning Center in New York, dedicated to providing a multimedia resource for understanding and promoting his legacy and the values he espoused. She created a website and an array of visual and innovative learning tools. Seven years later, she ceded the assets of the Arthur Ashe Learning Center to UCLA, where they became part of the Arthur Ashe Legacy Project. The project is under the direction of Patricia Turner, professor in the departments of African American Studies and World Arts and Cultures/Dance. Turner, whose respect for Ashe’s accomplishments dates back to her childhood, taught his autobiography at UC Davis and currently teaches a Fiat Lux seminar about him at UCLA.

The work of the Arthur Ashe Legacy Project includes managing a booth devoted to Ashe at the Arthur Ashe Stadium in Flushing, New York, where the U.S. Open is played, as well as reconfiguring a larger exhibition about his life that is currently being assembled and will likely travel to different venues.

Ashe was named Sports Illustrated’s 1992 Sportsman of the Year because of his unshakable support for humanitarian causes.

One of the Legacy Project’s recent initiatives is the Arthur Ashe Oral History Project, designed and led by Turner. In 2019, UCLA alumna and oral historian Yolanda Hester M.A. ’17 began identifying aspects of Ashe’s life that a UCLA oral history collection could examine deeply in ways that existing Ashe archives hadn’t.

Ann Koger, who in 1973 became one of the first African American women to play professionally in the Virginia Slims Tennis Circuit, speaks about traveling through the South as a young Black tennis player in the 1960s.

UCLA’s Ashe oral history archive, which will be housed at the UCLA Library Center for Oral History Research and the Ralph J. Bunche Center for African American Studies, explores his childhood years playing tennis in segregated Richmond. The interviews also document the experiences of African Americans playing tennis during the 1950s and ’60s. The oral histories delve into tennis’s seismic shift to its open era, when both amateur and professional players were finally allowed to compete for the major Grand Slam titles. In 1968, Ashe won the first U.S. Open of this new, much more lucrative era of pro tennis. Through intercontinental interviews, the recordings tell the story, too, of Ashe’s historic 1973 and 1974 trips to South Africa.

Assisting in assembling the collection is Chinyere Nwonye ’19, who in 2017 enrolled in Turner’s Fiat Lux seminar on Ashe. While she had seen the Arthur Ashe Student Health & Wellness Center on campus many times, she had never known that Ashe was Black. In the seminar, Nwonye and her classmates read Ashe’s memoir Days of Grace. They also took a tour of campus sites that are important to Ashe’s story, such as the location of his ROTC service. The course inspired Nwonye to join the oral history project after graduation.

The oral history method captures a person through others’ memories, sometimes in idiosyncratic detail. Hester and Nwonye note that the recordings take listeners inside the narrative in a way not possible through the written word.

Tom Chewning, a lifelong friend of Ashe's, describes meeting Ashe for the first time at a tournament in West Virginia. The two teens were both rising tennis players from Richmond but had never met due to segregation.

Details emerge from the interviews: One interviewee recalls competing in a match, going to pick up a ball and having felt someone spit on his hand. As a Black tennis player, he felt compelled to contain his anger, wipe off his hand and continue playing. Hester says narrators shared other instances of their struggles against, and triumphs over, subtler forms of racist resistance to tennis integration — for instance, a young player’s tournament registration paperwork would often conveniently disappear. 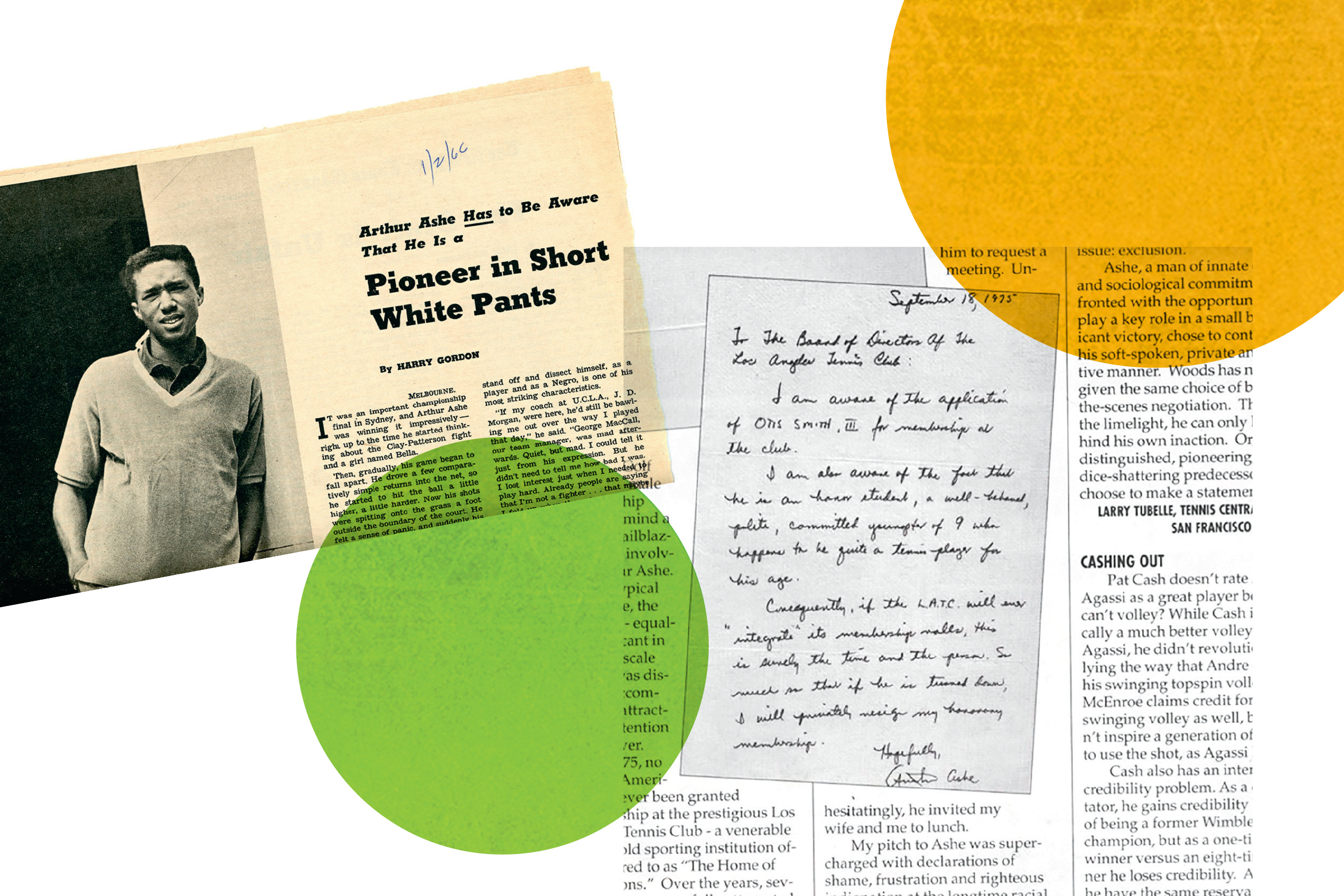 The oral history format took on a new dimension via Zoom, with narrators in their own homes, among their personal belongings and keepsakes. Nwonye and Hester cite countless moments when narrators would stop and say things like “I’ve got to send you this!” while holding up a T-shirt they’d received from Ashe or showing a racket he’d given them.

The complete project will include interviews with more than 100 of Ashe’s associates. By midsummer of 2021, Hester and Nwonye had interviewed more than 50 people, having completed 15 pre-pandemic Q&As. In spring 2020, COVID created a dilemma. “So much of oral history is about being in the room together, communicating not just verbally but also through gesture and body language,” says Hester.

But Zoom enabled interviews with people who might not otherwise have been as accessible — those in far-flung places across the country or even abroad. This was the case with poet Don Mattera, who interacted with Ashe during the tennis star’s 1973 trip to South Africa and wrote a poem titled Anguished Spirit—Ashe. And Hester says the slower pace of pandemic life made scheduling interviews easier, so she and Nwonye moved through their list much more quickly than they had expected to.

One underreported facet of Ashe’s life that the interviews reveal is his business savvy. From his Safe Passage Foundation, which supported young people of color through tennis, to his role as a cornerstone of the Association of Tennis Professionals, founded in 1972, Ashe built organizational infrastructures within and outside of tennis. Hester hopes the oral history project will contextualize some of the benchmark moments coming up in the next few years regarding Ashe’s playing career and humanitarian work that reached beyond the world of sports.

Researchers, students and tennis lovers will be able to immerse themselves in the completed archive. The narrators’ stories traverse pivotal periods of recent history, such as tennis’s open era, the civil rights movement, the Vietnam War, the women’s rights movement and the global AIDS epidemic. Nwonye sees symmetry between Ashe’s losing his life to HIV/AIDS at the height of a public health crisis and the COVID crisis challenging the world today.

If the histories are notable for their breadth, they are sometimes most striking for their intimacy. They offer reminders of how Ashe touched lives, sometimes unexpectedly. Take the case of Otis Smith ’01, now director of tennis at the Santa Barbara Tennis Club. In 1975, Smith was a rising junior tennis player who practiced often at the Los Angeles Tennis Club. The club, founded in 1920, had no African American members. Someone complained Smith was spending too much time at the club for a nonmember, forcing the 9-year-old to apply for membership.

Ashe, an honorary participant on the club’s board, learned of Smith’s plight. Fresh off his Wimbledon triumph, he dashed off a direct but characteristically polite letter advocating for Smith’s admission as a junior member — and for the 55-year-old institution to finally integrate. He presented the club’s directors with an ultimatum: They would accept Smith, or Ashe would resign his position on the board. Smith’s membership was quickly approved.

“My dad and Arthur stayed in contact,” recalls Smith, who went on to star in tennis at UCLA before playing professionally. “I met Arthur in Las Vegas, and I played tennis with him for a half-hour. He was there playing in the Alan King Tennis Classic. He changed my life.”