In 1987, when the UCLA business school was named the John E. Anderson Graduate School of Management, honoring benefactor John E. Anderson ’40, the name reflected the school’s expansion beyond business to include management of nonprofits and other organizations. To embrace that expanded mission, Dean J. Clayburn La Force M.A. ’58, Ph.D. ’62, Chancellor Charles Young M.A. ’57, Ph.D. ’60 and others dreamt of a new complex for the school, which then occupied the midcentury building that is now home to the Luskin School of Public Affairs.

Turning that dream into reality, though, was challenging. The architect chosen to tackle the project was Harry Cobb of Pei, Cobb, Freed & Partners in New York.

The first question: where to build on a campus already fully occupied. To make room, a site along Stone Canyon Creek was cleared of an existing structure that was part of University Elementary School, and Circle (now Charles E. Young) Drive was rerouted. 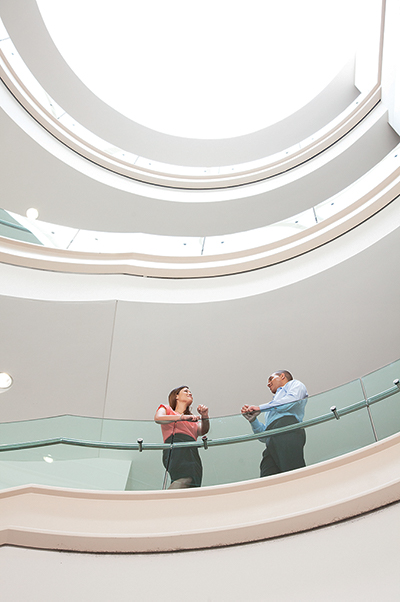 Cobb felt compelled to use the site wisely. “The design had to benefit not just the school but the entire campus, to enhance the life of the university,” he said just before the complex opened in 1995.

But how do you create unified structures on an uphill plot? Cobb’s solution was to follow the topography, beginning at the creek and climbing. He designed four buildings around a courtyard, which he likened to a town square. He gave the buildings a five-story limit, with the top two floors set back. Entrances to three of the four buildings open onto 60-foot-tall atria and bring the courtyard light inside.

At the top of a staircase that ascends from the courtyard, there is a fifth building, plus the Wells Fargo Court and — one of the project’s striking architectural features — a brick tower with a slot where light peeps through.

“The village idea creates the most appealing environment for the school and new pathways for the campus,” said Cobb, who died in 2020. The complex provides a route down from Lot 5 to the sidewalk that leads to Bruin Walk. Even if your destination is elsewhere, you can enjoy the richness of the Anderson buildings — a central aim of Cobb’s agenda.

Cobb’s plan makes it possible to circulate through the five major buildings — Cornell Hall, Gold Hall, Entrepreneurs Hall, Mullin Management Commons and the Rosenfeld Library — without stepping outside. The library, on the north end, offers what Cobb called a “final surprise” — an enormous window looking out to the landscape. A sixth building, Collins Center for Executive Education, sits closer to Sunset, since its programs attract people from outside campus.

Cobb revered Powell Library and Royce Hall and saw them as “figural elements that speak to you” in the way they enclose space. He wanted to bring back their tradition and interpret it in contemporary terms, so he used windows that he felt would “resonate” with theirs, as well as the same brick and cast concrete. Cobb spent three years searching for matching brick and finally located the original quarry. He also kept the Anderson complex low enough that the iconic buildings would still be visible from Sunset Boulevard.

“Royce and Powell defer to the space between them,” Cobb said. “They ornament the space but don’t overwhelm.” Looking at Anderson, you can see the resemblance.

After 20-plus years in the complex, the school needed more space. Cobb said the only place to put an addition was on the north side, which meant removing part of Lot 5. The seventh building, named for Marion Anderson, the wife of John E. Anderson, opened in 2020.