A quick spin through her home office, nestled in mountain-view Altadena on the outskirts of L.A., reveals everything you need to know about Justina Blakeney’s aesthetic. The room is a haven of lush textures, botanical prints and seafoam walls. Graphic patterns adorn a plush chair and pile rug; there’s a fluffy shag throw, Old World-style furnishings (courtesy of her grandparents) and plenty of what Blakeney fondly calls her “plant babies.” “It’s a mix of items that represent who I am as a person,” she says, pointing to watercolors perched on a nearby vintage chair. “There’s an overall nurturing vibe that Jungalow tries to bring — the idea of living a healthy life in a healthy home.”

Jungalow is Blakeney’s 15-year-old juggernaut interior design business. What began as a wildly popular decorating blog in her tiny, plant-filled bedroom is today a multimillion-dollar empire that sits alongside Chip and Joanna Gaines’ Magnolia and Kelly Wearstler’s eponymous design conglomerate as one of the premier lifestyle brands in the country. Blakeney is an accomplished interior designer, artist, bestselling author and award-winning blogger (with 3 million social media followers). But first and foremost, she is a design guru who wants to color your world — literally. Her purview is totally technicolor. It’s an artful vibrancy that is at the core of Jungalow, which aims to bring joy, serenity and color to living spaces.

“It’s an expression of my eclectic design style,” she says. “But the heart of it is about tapping into your own creativity, bringing out who you are in your space.”

Much of Blakeney’s inspiration is directly linked to her multiethnic background. Black and Jewish, she grew up in Berkeley, a city known for embracing diversity. “In many ways, growing up in a multicultural family gave me permission to put things together in a way that’s not conventional,” she says. “Meals at our house might be matzo ball soup with collard greens on the side. That’s just how we rolled. These were rich cultural experiences that influenced me.”

The children of two professors, Blakeney and her two siblings (an older sister and younger brother) were exposed to different cultures early on when the family moved to Switzerland for a year while her parents taught at the Université de Fribourg. She later returned for another year to live with a host family. As a child, Blakeney always chose the brightest crayons; in adolescence, she enjoyed sewing, crafting, and decorating and redecorating her room. 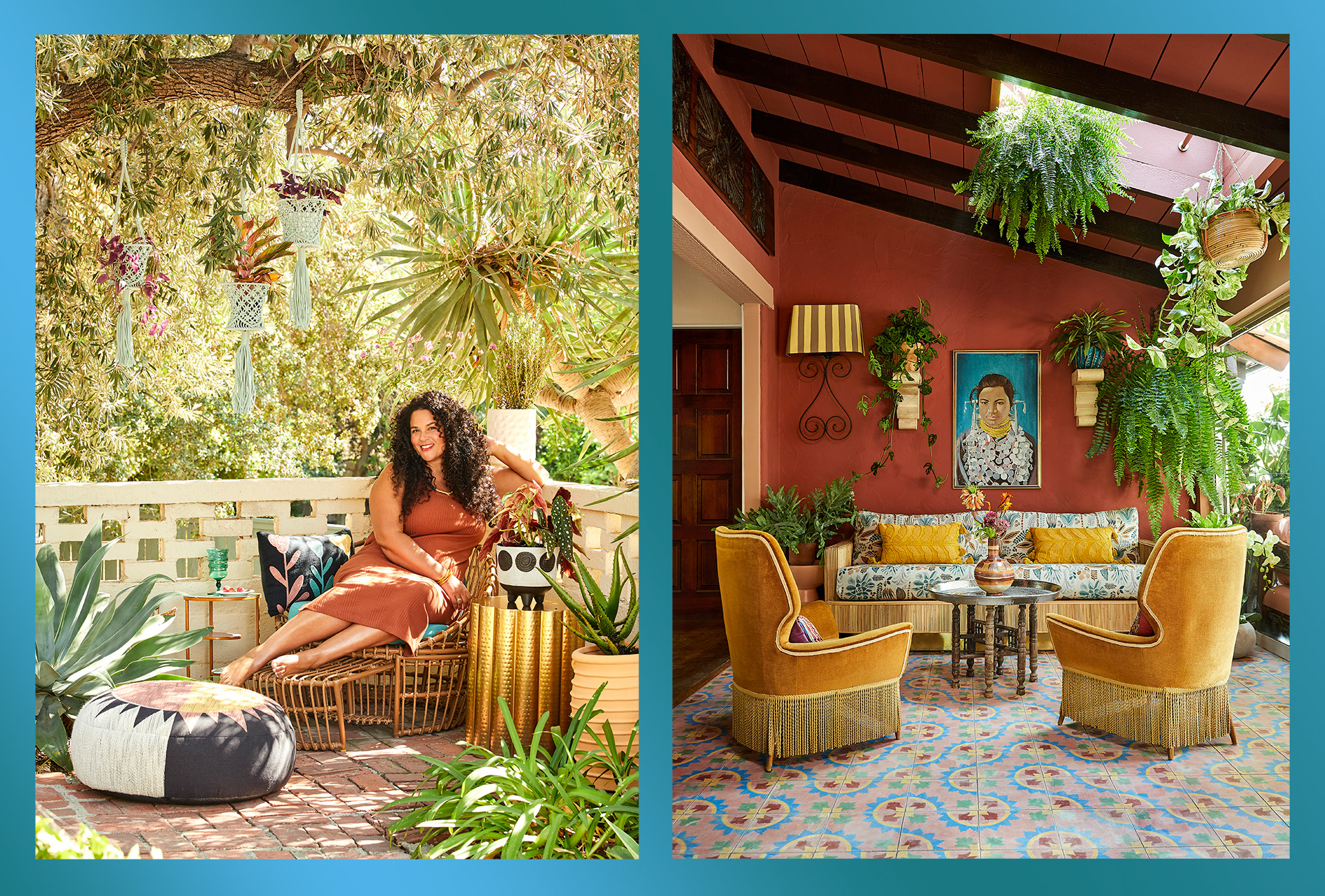 Jenna Peffley
From left: Blakeney enjoying her lush outdoor space; the lanai is a mix of rich hues and tropical accents, a hallmark of the Jungalow look.

Still, design wasn’t on her mind when she entered UCLA as a freshman in 1997. “I went in undecided,” she says. “I was flirting with communications, music or acting.” That is, until a new major — World Arts and Cultures — caught her eye. “It sounded like fun, and something that would cover all the things I was interested in. UCLA was a great experience for me,” she says. “One of the most important things that came out of UCLA was my circle of girlfriends, who I’m still best friends with today.”

Caitlin Levin ’01 is one of those friends. The two bonded junior year during a study abroad flight to Italy. “We were a group of four eccentrically dressed American girls who had all signed up for the same program in Florence,” recalls Levin, now a New York-based creative director. “Tina was wearing a crazy leopard-print hat. She was fearless.”

Blakeney credits UCLA with providing an academic experience that resonated with her culturally as well as artistically. “I remember taking a class about liminal space, which is an in-between or transitional place. I think maybe because of my biracial identity, I’ve often felt like I’ve lived in this in-between place,” she says. “I really connected with this idea. It made me think about how I can create my own liminal space. UCLA exposed me to these types of frameworks.”

After college, Blakeney spent six years in Italy before moving to New York, where she shared an apartment with Levin. There, Levin got to witness her friend’s maximalism and tenacity in full effect. “‘Justina Blakeney,’ the brand, started here,” Levin says. “Tina would be up into the wee hours typing away, working on the blog. Blogs weren’t really a thing yet, but she persevered. Her creativity is ginormous.”

“Once I was in the position where I started getting invited to do events or being featured in books, I would ask, ‘Who else is being included?’ It’s all about trying to pull in folks who aren’t necessarily invited to the table.”

In those days of the early aughts, Jungalow — the name combines jungle (a nod to Blakeney’s love of wild botanicals) and bungalow (her first solo apartment) — wasn’t even a fully formed concept but rather a passion project assembled from an assortment of botanical printed décor (wallpaper, pillows, fabrics) that Blakeney had collected throughout her travels. She worked as a freelance prop stylist to pay the bills, and in 2008 she moved back to L.A., where she had a gig as DIY editor for Venus Zine, a lifestyle magazine. The Jungalow blog was born a year later; the evolution from blog to full-blown brand would take another decade. Blakeney’s big break came when she became a suggested user on Pinterest: “It felt like overnight I went from having a few thousand followers to over a million.”

Throughout her journey, Blakeney has stayed true to her design aesthetic. “It’s not just about making s— look pretty,” she says, smiling. “I want my work to have meaning. It has to be meaningful not only in my life, but in the lives of others, too.”

Judging by her success, it is. For the past 15 years, people have been clamoring for Jungalow’s wildly popular designs. All three of her books have been bestsellers, and she’s in the middle of a multiyear partnership with Target, which signed on as a retailer in 2020 and today sells her Opalhouse line, which includes everything from bedding and wallpaper to paintings and furnishings. “A collaboration with Target is something we talked about as a goal in one of our first meetings,” says Kimberly Muroff M.B.A. ’09, Blakeney’s licensing agent since 2014, “so it was a proud moment for both of us when that partnership finally came together.”

Blakeney enjoys the creative freedom the Target alliance gives her. “I am like a kid in a candy store,” she admits. “The really great thing about the partnership is it allows me to close my eyes and imagine things, then wake up a couple months later with them in hand.”

Blakeney’s brand resonates on a mass-retail level because of its authenticity, Muroff says. “Almost all the designs for our licensed partnerships come directly from her own hands. There’s always a story behind them.”

Blakeney is nothing if not a living testament to her design aesthetic. A statuesque 5’10”, she favors boho glam printed dresses and sports a free-flowing, waist-length curly mane. Her infectious laugh is as much a part of her signature as her striking look. She throws out colorfully descriptive phrases like “jungalicious deliciousness,” with a penchant for combining words to create her own vernacular. (She admits to “loving a good portmanteau.”)

All of it makes Blakeney a very unique presence in the world of interior design. Her goal now is to make herself a bit less unique, creating opportunities for other people of color to thrive in the shelter space. “I think representation is a huge piece of it. Coming up in the design blog world around 2014, 2015, it was a very homogenous place,” she says. “Once I was in the position where I started getting invited to do events or being featured in books, I would ask, ‘Who else is being included?’ or ‘Are you interested in making this project more diverse?’ Then I would offer recommendations. It’s all about trying to pull in folks who aren’t necessarily invited to the table.” While she feels a shift toward more inclusivity, there’s still work to be done: “There’s definitely more visibility, but we need to keep having candid conversations to make sure representation is there in different ways.”

As the design world evolves, Blakeney continues to, as well. “Justina is artful in how she uses her platform,” says Shannon Randall M.P.P. ’03, a close friend and fellow Bruin who now works as a writer and creative director in L.A. “She donates sales to nonprofits, auctions her art, plants trees to help the environment. She’s generous in spirit.” During their 20-year friendship, Randall has been awed by Blakeney’s multifaceted artistry. “It’s rare to meet someone who can do everything well,” she says. “She makes bold moves and keeps evolving. It’s truly inspiring.” 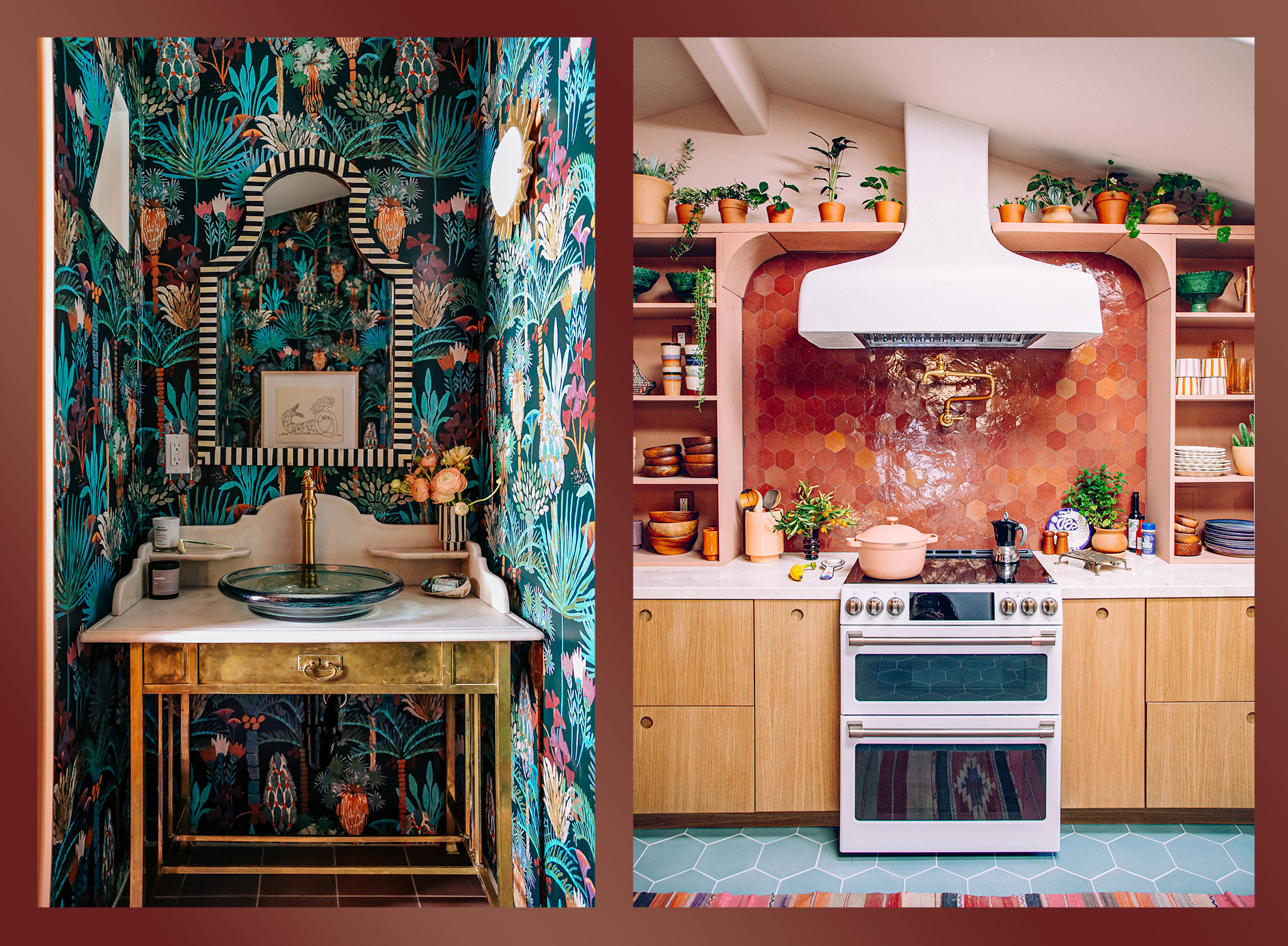 Muroff, who helped Blakeney broker some of her most successful licensing deals, would like that evolution to include an international expansion. “Justina has fans and followers all over the world,” she says. “Right now, she connects with them through social media and her books, but they’re absolutely hungry for her licensed product as well.”

Turning her brand global appeals to Blakeney on a personal level, too. “I would like to live abroad with my family at some point,” she muses. “It was something that made my upbringing very special, so I would want that for my daughter.” In the meantime, she’s happy living the Southern California lifestyle with her husband, writer Jason Rosencrantz, and their 10-year-old daughter Ida — her favorite collaborators. “If I seem like an incredible writer, it’s because of him. Jason is a fantastic editor and a big part of my writing process,” she says. Young Ida has ideas, too. “She’s just so present to everything that I am doing,” Blakeney says. “She has a little clipboard with ideas for my new book that I have actually integrated.”

Along with the forthcoming book, currently in the offing are a new rug collection, a new bedding line and more paintings. While Blakeney owns up to having a bit of “‘can’t stop, won’t stop’ energy,” she says she’s looking forward to embracing a slower-paced future, including spending more time at her new home. The place is, of course, unapologetically Jungalicious — with terracotta- and teal-colored walls, palm tree-embroidered draperies and pencil rattan sofas. Exotic tchotchkes (South African fertility dolls, Moroccan pottery) from Blakeney’s extensive sojourns can be found in every room, along with an array of plants that would rival any botanical garden. “I wanted to create an indoor-outdoor feel,” she says. “Each room transports you to someplace exotic.

“I’m trying to enjoy what I’ve built and not be on a hamster wheel so much,” she says. “I’ve got an incredible daughter and husband. I’ve got a bunch of collections in the works and a new home. It’s all a blessing. So what’s the rush?”

After years of proving herself in the ultra-competitive lifestyle space, Justina Blakeney has earned a moment. This moment. And as with everything else she’s done, she plans to seize it.