It’s a superhero movie staple — the futuristic laboratory alive with the buzzing of automated machines as scientists and creatives alike work in step with the beat. It’s another busy day at UCLA’s newly expanded MakerSpace, where a 3D printer churns out filament like a baker’s piping bag, creating vital parts of a model rocket, and a sewing machine taps rhythmically as an oven mitt is stuffed with old denim resembling blue cotton candy.

“It doesn’t matter your major, whether you live on or off the Hill — any student has access to this space,” says Charly Melikidse, the manager of MakerSpace, a UCLA Residential Life Learning Center, where even novices can learn to use smart machines to “print” everything from clothing and toys to battling robots and mountain bike frames. The mission is to improve the quality of life through better everyday design, says Melikidse. 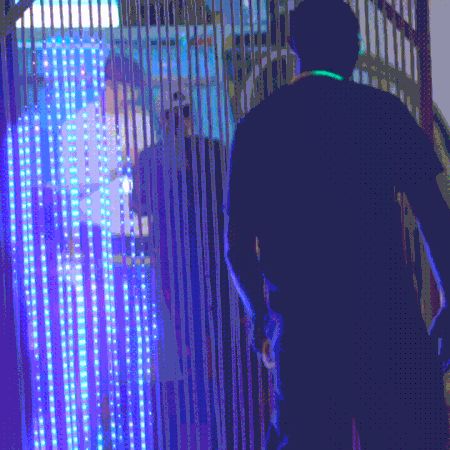 MakerSpace has partnered with classes and student clubs to teach fabrication technology and provide materials (within reason) and machines for woodworking and costume-making. Vinyl cutting has also proven to be a hit with students creating their own heat-pressed T-shirts.

Student Ahmed Haris Shurbaji, who irons colorful creations onto his clothes, is a walking advertisement for the lab. “I’ve had so many people come here and then say, ‘I’m going to come way more now,’” says the third-year psychobiology major.

Housed within Olympic Hall, the 3,000-square-foot shop is a welcome upgrade to the earlier MakerSpace at Rieber Hall. While the former space was popular, it could not house the latest machining tools for work with steel and harder metals.

Visitors to UCLA’s First Thursdays celebration may have enjoyed a dazzling device fresh out of MakerSpace: an ingeniously interactive mirror that reflects the viewer’s dance steps in color-switching LED lights. Students can check it out for their own special events.

MakerSpace has a special relationship with UCLA Housing, says Melikidse. Staff pop in to patch curtains or umbrellas on the sewing machines. It’s the stitch in time that saves a repair trip beyond campus.