Yuxi Tian and Iris Yirei Hu work at opposite ends of the spectrum. While Tian is a UCLA biomathematician who’s developing statistical and computational ways to analyze vast amounts of electronic health data to improve patient care, Hu is a Columbia University graduate student and artist who paints large-scale works that reframe stories of war and displacement through a feminist lens.

Although they share a connection to UCLA — Tian is working toward an M.D./Ph.D. and Hu is a 2013 graduate — they weren’t very likely to ever meet. But their paths are crossing because of a fellowship that helps underwrite the graduate education of immigrants and their children.

Both have been awarded 2016 Paul and Daisy Soros Fellowships for New Americans, which provide up to $90,000. They are among 30 fellows this year, all ages 30 or younger, chosen from across the country because they reflect the potential for making significant contributions in their fields. During the year, Tian and Hu will be meeting each other and other fellows at events hosted across the country.

“The fellows are from all different countries and socio-economic and religious backgrounds, and they have come to the United States in a myriad of ways — some were born here, while others are asylum seekers, refugees and green-card holders — but they all bring excellence to the table,” said Craig Harwood, who directs the fellowship program. “They demonstrate that immigrants, regardless of their background, continue to be a critical part of our nation.”

As one of the most highly ranked public universities in the country with a diverse student population that includes many immigrants and children of immigrants, UCLA can count 19 Paul and Daisy Soros Fellows among its students and graduates dating back to 1999, including physicians, sociologists, attorneys, clinical psychologists and anthropologists, among many other professions.

Chemist Luis Campos, who received his Ph.D. at UCLA, now heads a research lab at Columbia. Frankie Guzman, a UCLA law graduate, works as a juvenile justice attorney in San Francisco while law alumna Jassmin Poyaoan is director of the Community Economic Justice Clinic at the East Bay Community Law Center in Berkeley.

Alice Zhang, who was in the M.D./Ph.D. medical scientist training program jointly run by UCLA and Caltech, is the co-founder and CEO of Verge Genomics, a startup that maps out hundreds of genes that cause disease and then identifies drugs to target those genes simultaneously.

“The fellowship enabled me to pursue graduate work in neurogenomics with my own funding, which took the financial burden off my adviser,” said Zhang, whose father was an activist in the 1978 democracy movement in China and was granted political asylum in the United States several years later. “I eventually spun out this work into a genomics drug discovery startup. Most importantly, though, the fellowship provided me with a lifelong ‘family’ who has provided me constant support and inspiration, even years after the fellowship technically ended.” 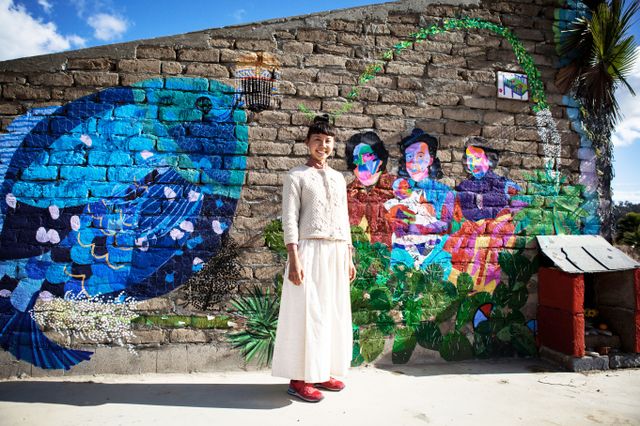 Courtesy of Iris Yirei Hu
Iris Yirei Hu stands before a mural she painted on Rafa Esparza's adobe wall sculpture located at the Bowtie Project next to the Los Angeles River.

Tian and Hu come from backgrounds that reflect the challenges that many immigrants and their children have had to overcome. Tian was born in Germany, the country where his parents temporarily settled after leaving China. Educated as physicists in China, his parents decided to switch careers to become computer programmers. “My parents wanted to better provide for our family,” Tian said. Overall, “It was pretty difficult for them, living in a new place and going back to school to transition to a new career.”

As an infant, he was sent to China to live with his grandparents. Tian didn’t become reunited with his parents, then living in Canada, until he was 4 years old. When he was 8, the family moved to Irvine, California, where he grew up excelling at academic competitions in math and science like the USA Mathematical Olympiad. At UC Berkeley, he double-majored in physics and molecular and cell biology and graduated with 19 A-pluses on his college transcript.

Hu’s parents emigrated from Taiwan separately to get a better education. Her father traveled to North Carolina to study electrical engineering and worked at restaurants to make ends meet. Her mother left Taiwan for Los Angeles to get her master’s degree in physical therapy at Cal State Los Angeles. The family eventually settled in the San Gabriel Valley, where Hu was raised.

At an early age, Hu discovered her love of art, but “I grew up in an immigrant community in L.A. I wasn’t exposed to any working artists.” And she felt pressured to follow other career paths. “Being an artist wasn’t imaginable to me in the way it is now,” Hu said.

But once she became a UCLA student, she said, “Everything lined up for me. The friends I met are still my friends. The faculty, the rigor of the instruction and the pedagogy — I found this kind of community at UCLA that was incomparable to anything I’ve ever experienced.”

At UCLA, she began to ask questions about who held the power to write history, make images and produce culture. Under the mentorship of art professors Russell Ferguson and Andrea Fraser, she began creating performance art — reciting pieces that she had written — and large-scale paintings informed by her family history of displacement, migration and instability.

Her experiences led her to work with teachers and others at the Museum of Contemporary Art, Los Angeles to make art accessible to immigrant and first-generation American students. In 2013, she co-founded a collaborative experimental art publication, baumtest, with other artists in Los Angeles. And her work has been exhibited in national and international galleries as well as other public venues.

Today, she is working toward her M.F.A. degree at Columbia, “doing what I’ve always felt I was meant to do — creating art.”