Kareem Abdul-Jabbar returned to Pauley Pavilion, the place where a relationship between the basketball legend and his life mentor, the late UCLA Coach John Wooden, took shape and became foundational in guiding Abdul-Jabbar's life as an athlete and a human being. That's the subject of his latest book, "Coach Wooden and Me:  Our 50-Year Friendship on and Off the Court," recently released by Grand Central Publishing. 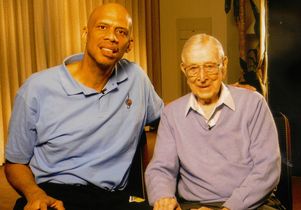 More than 350 people came to Pauley Saturday, May 27, to listen to Abdul-Jabbar, who led UCLA to three national championships under Wooden, discuss the lessons he learned from the winningest coach in NCAA history at an event hosted by the UCLA Black Alumni Association and the UCLA Afrikan Student Union. Abdul-Jabbar, the NBA's all-time leading scorer, UCLA alumnus, historian and author, spoke with Tyus Edney, former Bruin point guard who helped UCLA  capture its 11th NCAA championship in 1995. A former NBA player, Edney is now an assistant basketball coach for the Bruins.

Here's an excerpt from "Coach Wooden and Me":

John Wooden died in 2010. So why did I wait seven years to write this book? 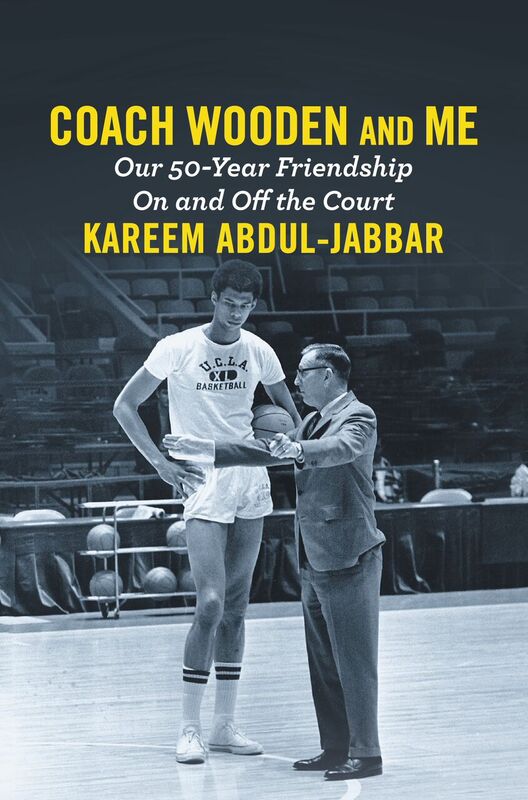 Because of something he taught me over the nearly fifty years of our friendship. When I played for Coach Wooden at UCLA, he was very hands-on. He would follow us up and down the sideline barking encouragement and instructions. Then he would pull an individual aside to demonstrate a shot, a pick, a fake. His face always seemed inches from ours. But sometimes he would go all the way to the top rafters of Pauley Pavilion, where all he had to do was raise his arm to touch the ceiling. From there he would look down on us like a benevolent god, watching us scuttle up and down the court. He liked the fresh perspective that gave him. A way to see the big picture. Watch how all the moving parts worked together.

That’s what I had to do with our many years of friendship. I had to climb over the seven years since his death to view what it all meant, measure how great his impact on me and others was. This book is that view. I could have written a book about him after I left UCLA. Or after I retired from the pros. Or after Coach died. But those books wouldn’t have been this book. This book spans almost fifty years of an evolving friendship seen through the eyes of a man who is old enough and mature enough to understand the truth about our relationship, even when I was too young at the time to recognize those truths myself.

Coach Wooden’s most important lesson was that we should never focus on the outcome but on the activity itself. “Don’t think about winning the game,” he’d say. “Just do everything possible to prepare. As long as you know you have done everything possible and you have given your best self on the court, that is your reward.

The scoreboard is meaningless.” This philosophy, which became the basis for his time as an English teacher and coach, was inspired by an anonymously written poem he read in college:

Before God’s footstool to confess

A poor soul knelt and bowed his head

“I failed,” he wailed. The Master said,

“Thou did thy best, that is success.”

Trying to apply his philosophy solely toward winning would be like doing good deeds only because you hope it will get you into heaven. Being good is the payoff, athletically and spiritually. That’s why he didn’t care for sports movies in which the underdog team or player learns the hard way that winning isn’t everything, but then they go on to win at the end. To him, those movies should have ended with the lesson learned, the team taking the court happy in their newfound wisdom, the whistle blowing to start the game, and then freeze-frame and run credits. Showing the team winning sends the wrong message: that life lessons exist to serve as a guide for acquiring things that make you feel like a success. His point was that the life lesson is the success. The traveling is the reward, not reaching the destination.

This book is not just an appreciation of our friendship or an acknowledgment of Coach Wooden’s deep influence on my life. It is the realization that some lives are so extraordinary and touch so many people that their story must be told to generations to come so those values aren’t diminished or lost altogether.

Coach was an old white Midwesterner with old-fashioned ideals; I was a quiet but cocky black kid from New York City who towered eighteen inches over him. He was a devout Christian; I became a devout Muslim. He loved big band music of the swing era; I loved modern jazz. On paper, it’s understandable that we would have a good working relationship as coach and player. But nothing on that same paper would even hint that we would have a close friendship that would endure a lifetime.