Bill Walton’s San Diego residence, where he lives with his wife (and fellow Bruin) Lori ’86, is more than just his home of 39 years. It’s a haven for Walton’s vagabond life as a basketball player, broadcaster, bicycle rider and Deadhead. Distributed throughout the house — alongside the John Wooden memorabilia, Grateful Dead artifacts and family photos — are reminders of Walton’s unforgettable basketball career, in which he played center for the Bruins from 1971 to 1974 and was a member of two undefeated NCAA championship teams. As a pro, Walton won NBA championships with the Portland Trail Blazers (1977) and the Boston Celtics (1986). The Hall of Famer ’74 recently talked about his approach to life, what he’s learned, and his love for his alma mater.

Bill, as a UCLA student in the Nixon/Vietnam era, you were known for playing basketball, but you were also an activist. Now we find ourselves in tumultuous times again. What’s your message to today’s students about activism and how they can impact the world?

Get into the game, and don’t wait for the ball to fall in your lap. We are responsible for the world we have, the world we’ve created, the world we’ve allowed to develop. If you don’t like the way things are going, get out there and make things different. As we live now, in a culture of lies, deceit, dishonesty and hypocrisy, where down is up, where enmity is harmony or stupid is smart, where villain is victim or disgrace is honor and plutocracy is populism, we have a responsibility to fix things.

What role did UCLA play in your life, and what role can a great university like UCLA play as an institution?

I was UCLA’s easiest recruit ever, and I sadly became John Wooden’s worst nightmare. I embarrassingly drove the poor guy to an early grave at 99. But I have great pride, loyalty and gratitude to and for UCLA.

Today’s students listen to hip-hop. Make the Grateful Dead relevant to them.

The Grateful Dead is like basketball. It’s a grand celebration of all things good in life … an opportunity to make a positive contribution in every single moment. It’s the epitome of happiness, peace and love and joy and optimism and hope, and all the things that I believe in and try to live and stand for. And it’s super fun, particularly when you get to do it every day.

When the show starts, the celebration begins, and there’s just so much anticipation and excitement and uncertainty. When you’re a basketball player, when you’re a freelance worker like I am, an entrepreneur, it’s that level of uncertainty, apprehension, doubt, hesitation, fear — all the things that go into having this kind of life. Every day of my life is completely different. I get to sit down and talk with cool people about UCLA and to have the friends, the relationships and the experiences and the knowledge and the ties that bind.

The things in your home make it clear that the Dead represent more than just music to you.

To be a part of [the Deadhead] community, something that is bigger than you — that’s what I live for.

I was super lucky as a child. My parents were not into sports at all, but they were the most encouraging, supportive and nurturing parents. Whatever I wanted to do, they would say, “That’s cool.” So, to be able as a 9, 10, 11-year-old boy to pick heroes like Bill Russell and Muhammad Ali; to find heroes like Martin Luther King, Bobby Kennedy, Sargent Shriver; to find heroes, role models like Jerry Garcia and the Grateful Dead, Bob Dylan and Neil Young, John Fogerty and Jimmy Cliff, David Crosby and Jackson Browne and the Beach Boys and Bruce Springsteen, the Eagles and the Rolling Stones and John Lennon and Fleetwood Mac — all these people who are still out there and still my heroes. Incredibly, I became their friend. A lot of things look good on the radar, but [there are] things that are truly great in life, like UCLA, like the Grateful Dead, like everybody I just mentioned. The closer you get, the better they look.

That is also the perfect description of my wife, Lori. 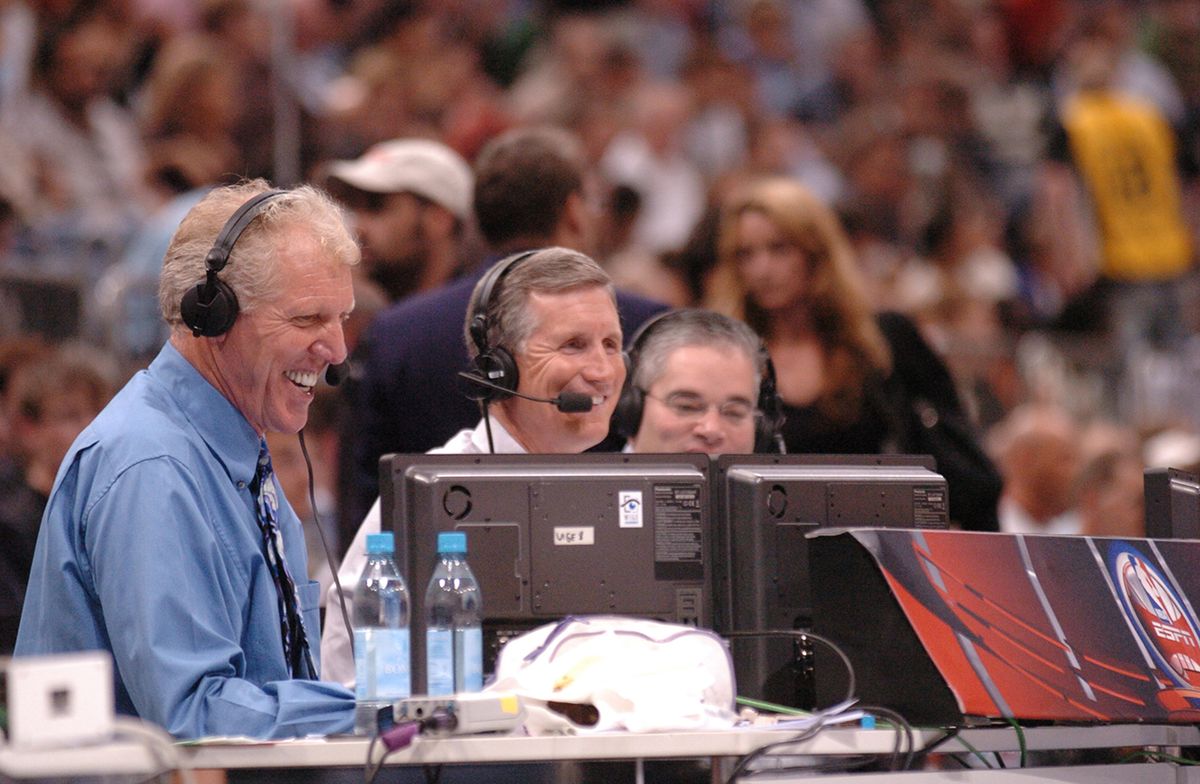 Getty Images
Walton sharing a laugh with fellow commentators in the ESPN booth during the NBA Europe Live Tour.

What was your life like, growing up here in San Diego?

I grew up in a noncompetitive household, a nonbusiness household, and had the greatest parents ever. I had the most wonderful childhood anyone could ever dream of; I was influenced by the values of my parents.

Every coach and teacher I had as a child was a John Wooden disciple. I had this remarkable coach who was a volunteer at our parochial elementary school. For 59 years he never took a dime, [but] when he died a few years ago, he was the richest guy I’d ever known. I cannot tell you today that he knew anything about sports, but he knew life and he knew people and he knew community and he knew team and family and hope and joy and the use of sports for celebration, the use of sports for education, but also, like so many others in my life, the use of sports to make the world a better place.

So much has been written about Coach Wooden. Is there anything left for us to learn about him?

Just how much he changed. I did not know him when he was a player; I only knew him as a coach. [And] he was not your friend when he was your coach. He was a very serious guy who took his responsibilities solemnly. He was not into frivolity [or] messing around. He was into getting the job done. He was not into accolades or recognition or credit. He was into work. He was very much like Jerry Garcia, very much like Larry Bird.

As we became friends, we changed, and he changed. When [I was] playing for him, he never talked about himself. Never. We’d ask him, “Tell us some stories about when you were a player. Tell us a story about your life.” And he would change the subject immediately. The only thing he did was to try to teach us about the subject that we thought was basketball, but was really the game of life. He never talked about winning or losing. We never watched film. He never used the blackboard. We never had a play. He never called time out. But he taught us the ultimate skills: how to think, how to dream, how to learn and how to compete. Then, when he became your friend, he would open up about his life and his challenges.

What have you learned from your mistakes?

No one has made more mistakes than me. No one has failed more often than me. My time at UCLA was marred at the end. We lost four of our last 17 games. I broke my spine. There were team chemistry problems. But as I was standing at the fork in the road, making the choice, making the decision, I never tried to make the wrong decision. I never thought, OK, I’ll go this way, even though I know it’s wrong.

One of the saddest things in my life today is that we know the things that we’re doing are wrong, destroying the environment and not investing in infrastructure, not investing in future generations. If I only knew then what I know now.

Over the course of 65 years, what I have really learned is tolerance, patience, perspective and relativity. And if anyone had ever mentioned those four qualities with the name Bill Walton before, you’d have to seriously question that person’s sanity, you know?

[I think about] the magnificence that was my time at UCLA until the very end, and then the realization immediately when I left — I realized the gigantic mistakes that I had made, and I spent the rest of my life trying to make it up to Coach Wooden and trying to stop causing him grief and consternation. I’m just super lucky that he was as patient a person as he was. 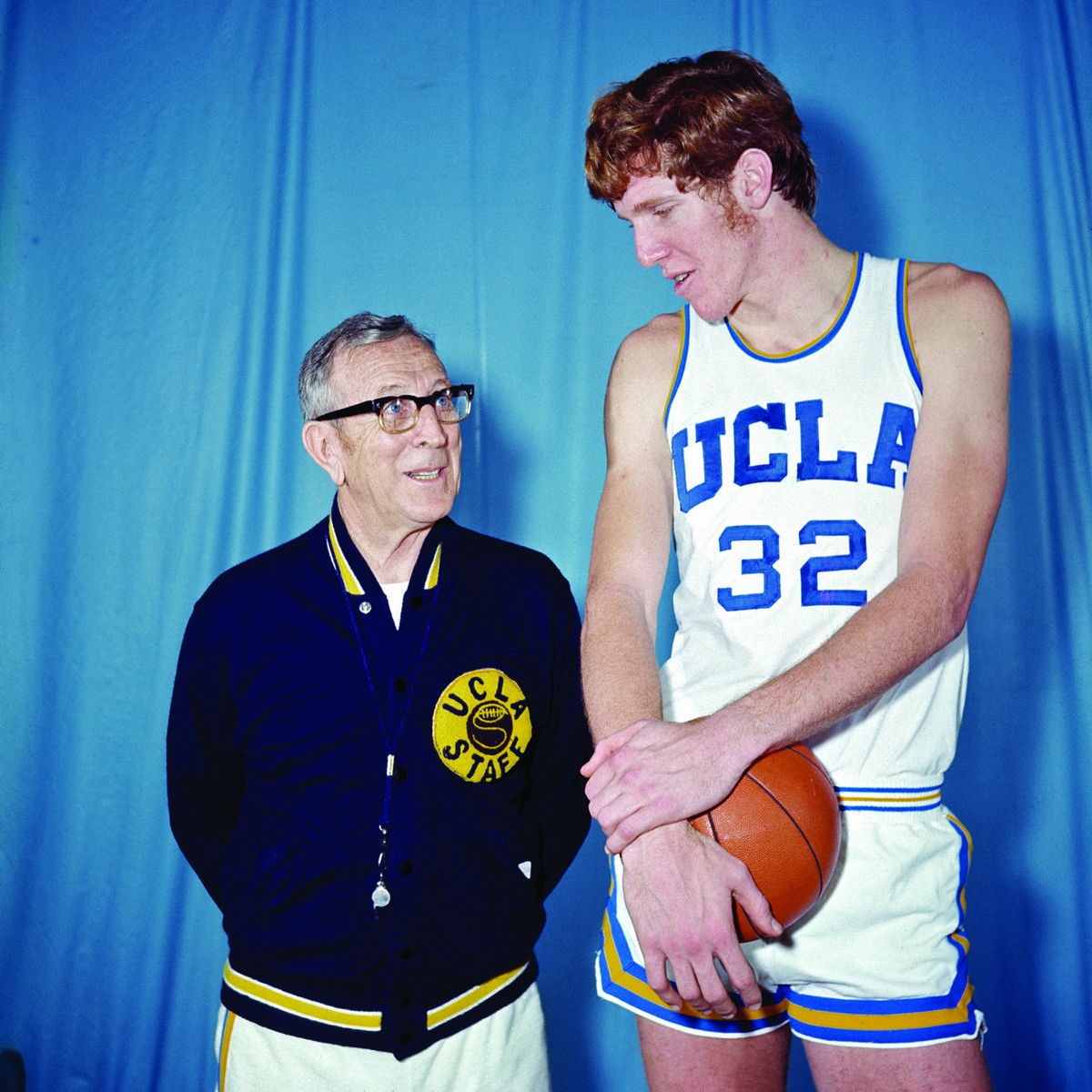 Finally, what excites you about the future? What gets you out of bed?

I’m excited about the chance I have to still try to make a positive contribution. I’ve had 37 orthopaedic operations. I spent my entire adult life in chronic pain until now, and the last few operations I’ve had have worked magnificently. I am pain-free. I don’t have to take any medication, which is fantastic. I’m also happy in love, and I never thought I would be happy in love. So I have a lot of great things going for me right now.

If your goal is to be happy — which mine is — your happiness starts with your health. From there, it goes to your family. It could be your team, your group of friends. Then you have to have a sanctuary, a safe place. Our home here — we’ve been here for 39 years — this is my dream. Nothing good could happen in my life that could entice me to leave here. Then [there are] the hopes and dreams that tomorrow’s going to be better. I’m a believer.

It was like being on tour with the Grateful Dead. It was like being on a big, long bike tour where you get up, you eat, you sleep and you ride your bike. Or when you’re a college student, you get up at the crack of dawn, classes at 7, 8, 9, 10, then lunch. Pauley Pavilion in the afternoon. Dinner. Study. Movie. Concert. Get to bed early, because you know that tomorrow is going to be another fantastic opportunity to live life to its fullest.