“We had slipped back. There was a confidence problem, and [there were] a lot of hard decisions to be made,” he says. “Then the pandemic forced us all to rethink our game and how to work together, and we came out stronger. It is not what any of us expected, but the transformation under pressure was powerful.”

Wright is used to glory days. As a UCLA student, he was part of the water polo team that won back-to-back national championships in 1999 and 2000. He’s a three-time Olympian. As assistant coach, he helped steer the women’s water polo team to a national championship with a victory over USC in 2009. Then, as head coach, Wright repeated the feat with the men’s squad — again over USC — in 2014 and in March 2021. This year’s national title is his fourth as head coach.

It is little wonder, then, that in April 2021, Wright’s peers in the Association of Collegiate Water Polo Coaches voted him coach of the year (as well as voting the Bruins’ linchpin, senior Nicolas Saveljic, player of the year). 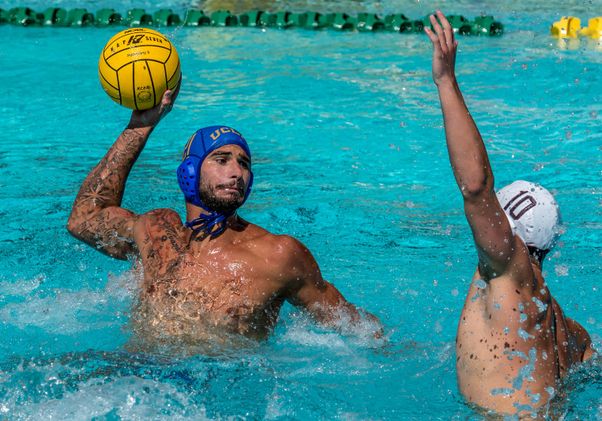 UCLA Athletics
UCLA’s Nicolas Saveljic, who was voted player of the year, during the March 21 game against USC.

As the early months of the pandemic grew ever more grim and players stepped away, Wright worried that key team members might lose their physicality and focus.

“We had to strip it back to fundamentals in Zoom sessions while finding ways to make sure everyone could stay fit, including those who did not have all the advantages necessary to stay in peak fitness,” Wright says. “When we finally got back together, we had to say, ‘It’s OK if you are not where you were, if you have slowed reactions. We will make up for it.’ To make it tougher, we never had the same roster from week to week, as we asked people to play out of position.”

The team lost its opening game. And then another. But Wright’s players bonded under the pressure of the shortened season, and they started winning. As winter gave way to spring, the team’s confidence continued to grow, propelling the Bruins to triumph over the Trojans in the title game. Victory in the final delivered the men’s water polo program its 12th NCAA championship and UCLA’s 119th overall.

“Some of the other teams are machines out there,” Wright says, “but we proved through challenging times that UCLA is family.”