“I come from a long line of Jewish bakers. I was born in 1929 and lived over the bakery my father owned. I’ve smelled bakery all my life,” says Stan Berman, 90, founder of the famous Stan’s Donuts in Westwood, which closed on April 10.

“When I moved to Los Angeles in 1954, I was working at Jewish bakeries. So when a friend of mine bought this little shop on the corner of Weyburn and Broxton, I was the only one he knew who could handle a bakery. That’s how Stan’s Donuts started.”

Berman began experimenting with doughnuts every Sunday, and soon they were selling like, yes, hotcakes out a side window. Thus began the cozy shop that fed UCLA faculty, students, staff and tourists for 55 years. The sweets were addictive, and lines would wrap around the block. But Berman is modest. Instead of declaring his wild concoctions — such as the Peanut Butter Pocket and The Simpson — as the reasons for his shop’s success, he credits the location. “Westwood just had something, and we were in a good spot. We had the ocean breeze most of the time, and it was a straight shot to the beach. It was perfect.” 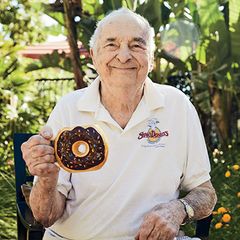 Sami Drasin
Berman relaxing at home in his retirement community.

Although many people blame COVID-19 for the shop’s closure, Berman says it was many factors. “Until four years ago, I was working every day. But then I had a stroke and couldn’t work as much, sold my house and moved to Thousand Oaks. That was the beginning of the end,” he says. “Then a new landlord raised my rent by $4,000, which would have been fine if I could work full time, but I couldn’t. With COVID, business dropped 30%, and I couldn’t afford to pay workers to work in my place. It was enough.”

When his shop closed, Berman received a letter from UCLA Chancellor Gene Block, thanking him for his service to Westwood and Bruins.

Over the years, Berman saw dozens of celebrities, including John Wooden and Kareem Abdul-Jabbar ’69. “One morning, I’m working as usual, frying the doughnuts and facing the window. I see three faces watching me, and I thought they were regulars because two of them looked so familiar. They come in and sit down. I ask my staff, ‘Who is that?’ No one knew, until a delivery guy comes in and says, ‘You know who’s sitting at your table out there, right?’ It was Elizabeth Taylor, Roddy McDowall and John Warner, Elizabeth’s husband. The most beautiful woman in the world, with all her diamonds on, right there.”

Longtime friend and screenwriter Danny Biederman ’75 went to Stan’s shop every day for decades, writing and people-watching. He has spotted Steve McQueen and Ali MacGraw, Fred Astaire and Michael Caine, to name just a few. “The place had this charm, like old-time Hollywood,” Biederman says. In fact, for a scene in Once Upon a Time … in Hollywood, director Quentin Tarantino temporarily restored Stan’s original signage and striped awnings.

Berman also remembers spotting several adult film impresarios, such as Al Goldstein. And he counts Louis Ignarro, the Nobel Prize–winning UCLA pharmacologist who has been called the “father of Viagra,” among his close friends.

Berman, who still has a partnership with Stan’s Donuts in Chicago, now spends time with his family — he has 10 grandchildren and nine great-grandchildren (his son Jeff works at UCLA Housing & Hospitality). He recently lost his wife of 67 years and currently lives in a retirement community. And yet, despite such significant changes in his life, Berman is unfailingly cheerful. “For whatever reason,” he says, “I haven’t gone insane.”

We caught up with Stan from Stan's Donuts!

He told us about his decades of serving Bruins and Hollywood legends, how he got his start and how he's enjoying retirement: https://t.co/az9H35LBw2 pic.twitter.com/8K0DIze78m