As we prepare to usher in 2023, let’s take a moment to look back on 2022, another year in which UCLA and the people who make it come to life made us proud as they excelled in their fields, surprised with their originality, provided comfort in our grief, helped us more clearly make sense of a confusing and, at times, troubling world, and added to our collective knowledge.

This year, our annual year-in-review list is divided into categories that highlight just some of the many Bruins who embody our most important values.

Fulfilling a long-held aspiration, UCLA became the first University of California campus to guarantee all undergraduates campus housing. Students who enter as freshmen will get four years of housing, and transfer students will get two. In fall 2022, UCLA opened the new Laurel, Palo Verde and Tipuana apartment buildings, providing up to 2,300 beds for undergraduates, along with more than 1,100 beds at the neighboring Gayley Heights complex.

“Living on or near campus contributes greatly both to students’ educational experiences and to the richness of our community,” said UCLA Chancellor Gene Block. “This guarantee represents a crucial milestone for UCLA.” 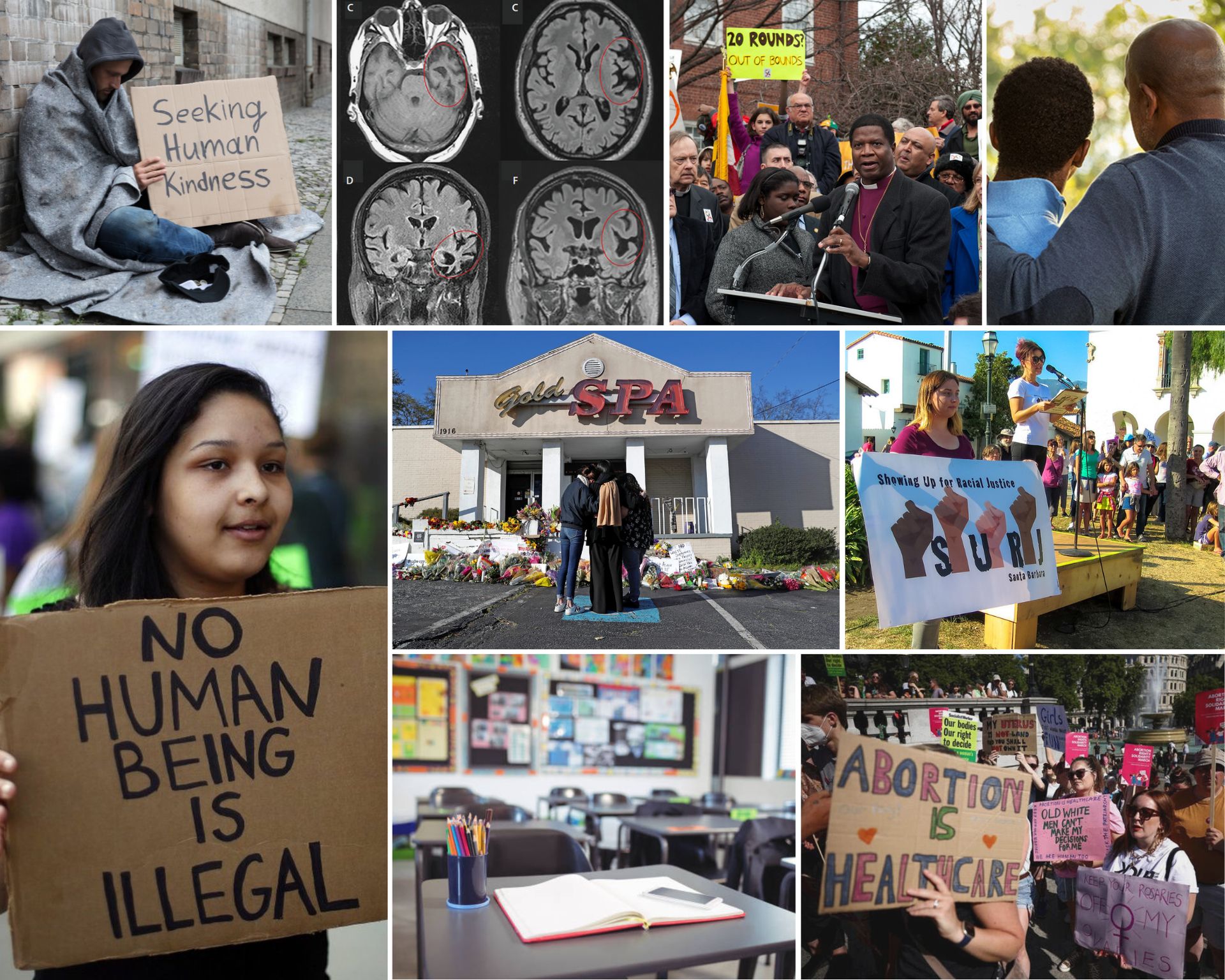 In October, UCLA announced the creation of the Initiative to Study Hate, a multidisciplinary project supported by a $3 million gift from an anonymous donor. In the project’s first year, researchers will undertake 23 projects. The creation of the initiative comes at a particularly fraught time, with rising political and economic tensions and the COVID-19 pandemic having led to increased expressions of hate. Meanwhile, longstanding structures of power often continue to perpetuate bias, stigma and enmity.

“Hate is so pervasive in our world that it almost seems too daunting to take up,” said the institute’s director, David Myers, UCLA’s Sady and Ludwig Kahn Professor of Jewish History. “But we believe that this is exactly the kind of big question that a great public university like ours must seek answers to. This new initiative aims to understand how and why hate functions as it does.”

UCLA Broadcast Studio
Refik Anadol and the team of artists, architects, data scientists and researchers who together make up Refik Anadol Studio created the data sculpture especially for the UCLA campus by feeding a dataset of more than 300 million photographs of nature (landscapes, flowers, trees, clouds, water, lakes and the ocean) through machine-learning algorithms.

UCLA’s “Moment of Reflection,” an 18-by-18–foot artificial intelligence–powered data sculpture that displayed wavelike forms shape-shifting into explosions of brilliant colors that danced to the sounds of the sea in campus’s Franklin D. Murphy Sculpture Garden, brought thousands of people out to contemplate how COVID-19 had affected their lives.

“I’m very happy to say that at UCLA ... during these hard days, we find a way, a light, to interact with the challenges in life and create art that hopefully touches our minds and soul,” said artist Refik Anadol, who earned a master of fine arts degree from UCLA’s Department of Design Media Arts, where he currently serves as a lecturer.

Scholarship and expertise that meets the moment 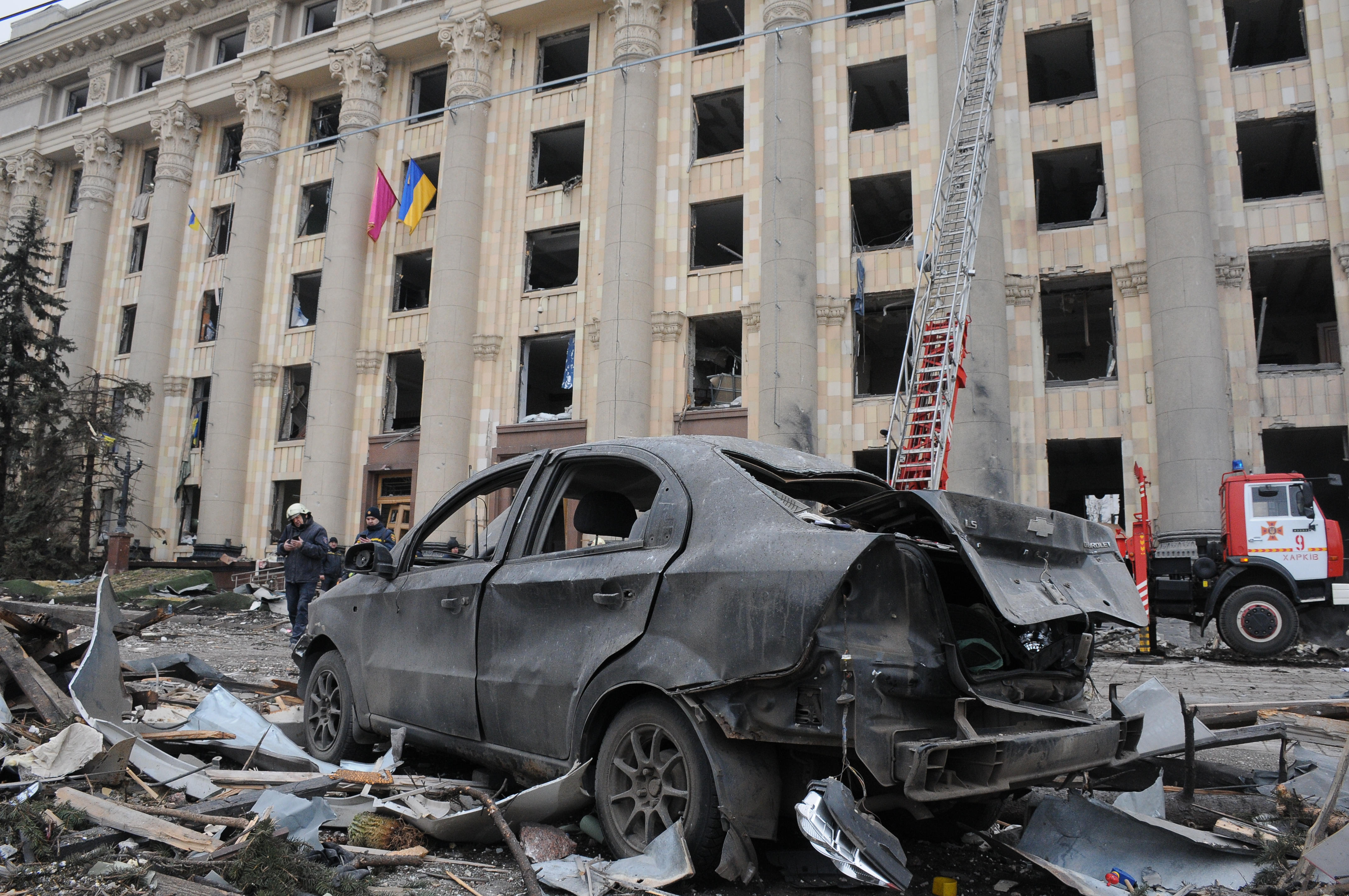 Fotoreserg
View of a civilian building damaged following a Russian rocket attack in the city of Kyiv, Ukraine.

One of UCLA’s core values as a public university is to help people make sense of the world. In 2022, professors helped explain a war on the other side of the world — Russia’s invasion of Ukraine. They were also frequently called upon as experts for the media when it came to two massive Supreme Court rulings — one on abortion and the other on the Environmental Protection Agency’s power. Meanwhile, other faculty helped lead the way on protecting American democracy and spotlighting the coordinated efforts of some elected officials to stifle the teaching of critical race theory.

In perhaps the most striking example of meeting the moment, a UCLA-hosted online event brought its virutal audience to the frontlines of the conflict as a Ukrainian professor shared his perspective on the invasion as rockets fell in the background.

Students and alumni who never cease to amaze

Calling something “magical” can be hyperbolic. But when a hopeful student finds out they’ve been admitted to the most applied-to university in the United States and becomes a new Bruin, the magic becomes real. That’s why we featured eight new students on the cover of the fall issue of UCLA Magazine.

These were just some of the exceptional students and graduates whose stories we were privileged to share this year. A common value linking their stories: All of them have been doing the hard work to build a more equitable society.

Other outstanding students and alumni: 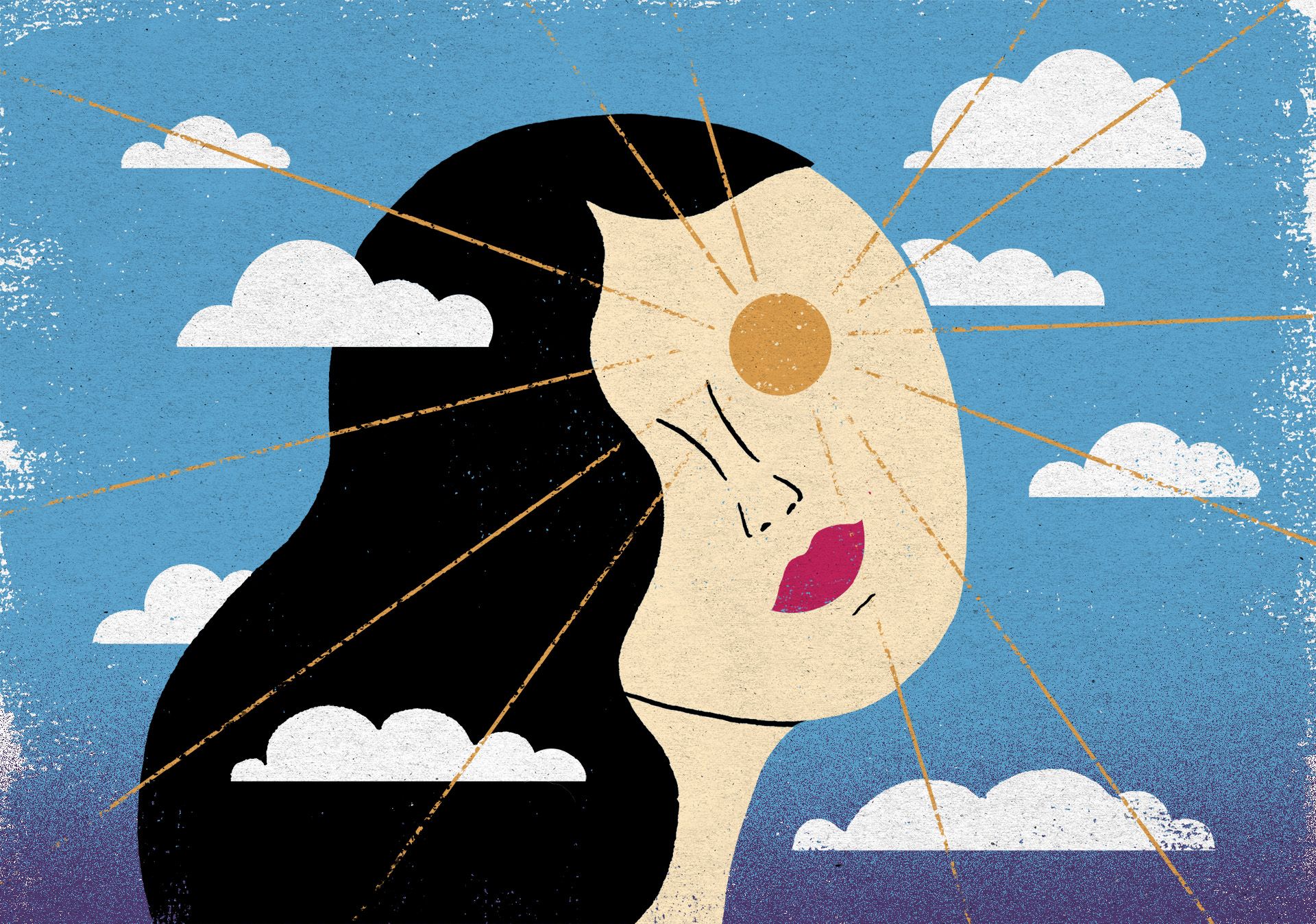 The beneficial reach of UCLA’s research, programs and people extends far beyond campus. From partnering with government agencies like the Los Angeles County Department of Mental Health to bring critically needed mental health services to underserved populations, to working with advocacy groups to teach teens and young adults across California about politics and voting, to creating a new event series designed to help revitalize the Westwood neighborhood UCLA has called home since its founding — Bruins have service to their communities in their DNA.

Other times UCLA made an impact: 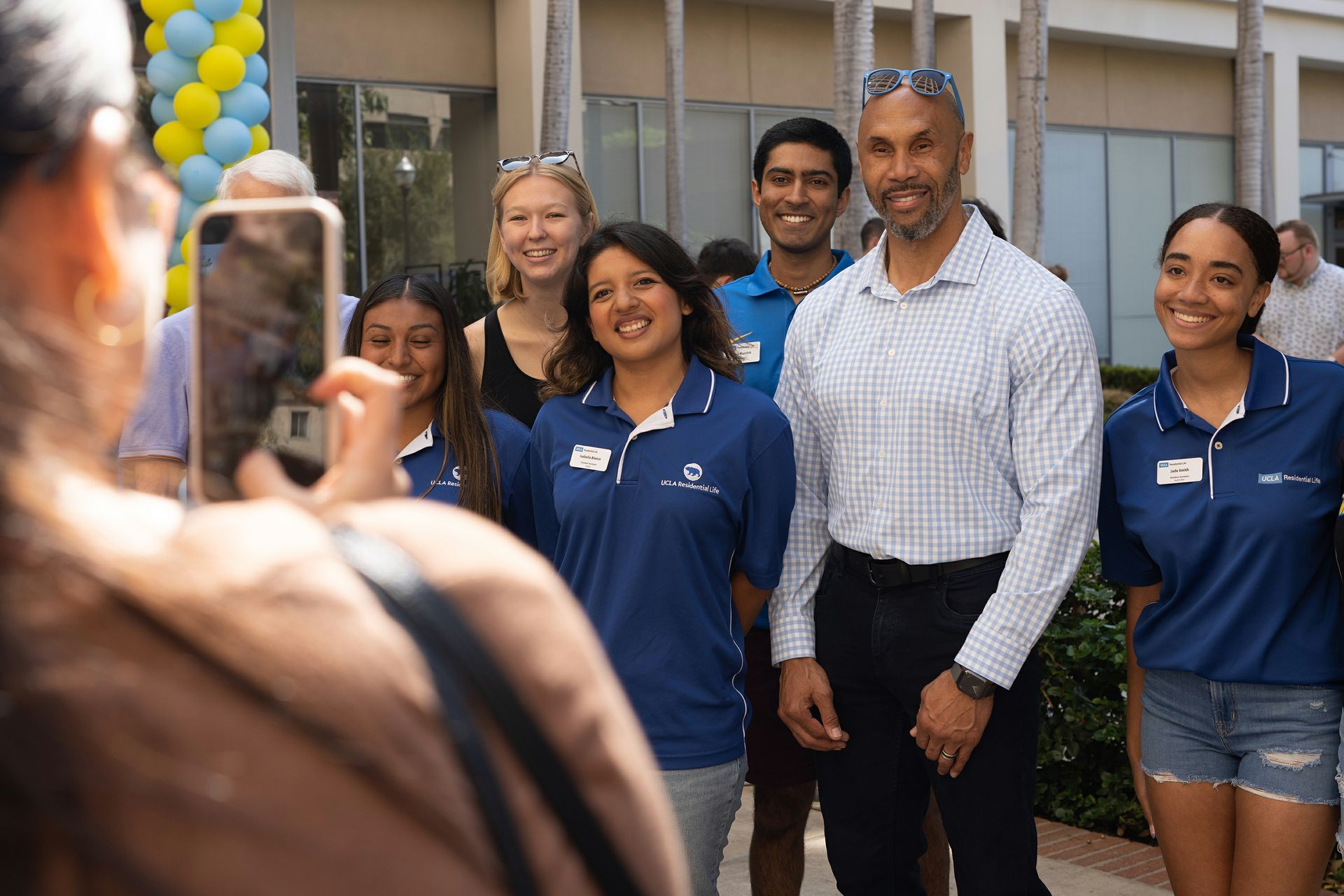 This year, UCLA enthusiastically welcomed new people to key leadership posts, headlined by Darnell Hunt moving from dean of social sciences in the UCLA College to the executive vice chancellor and provost position, where he will serve as UCLA’s top academic officer. In this Q&A, he describes how he intends to be a champion for inclusive excellence.

UCLA wouldn’t be UCLA without its staff 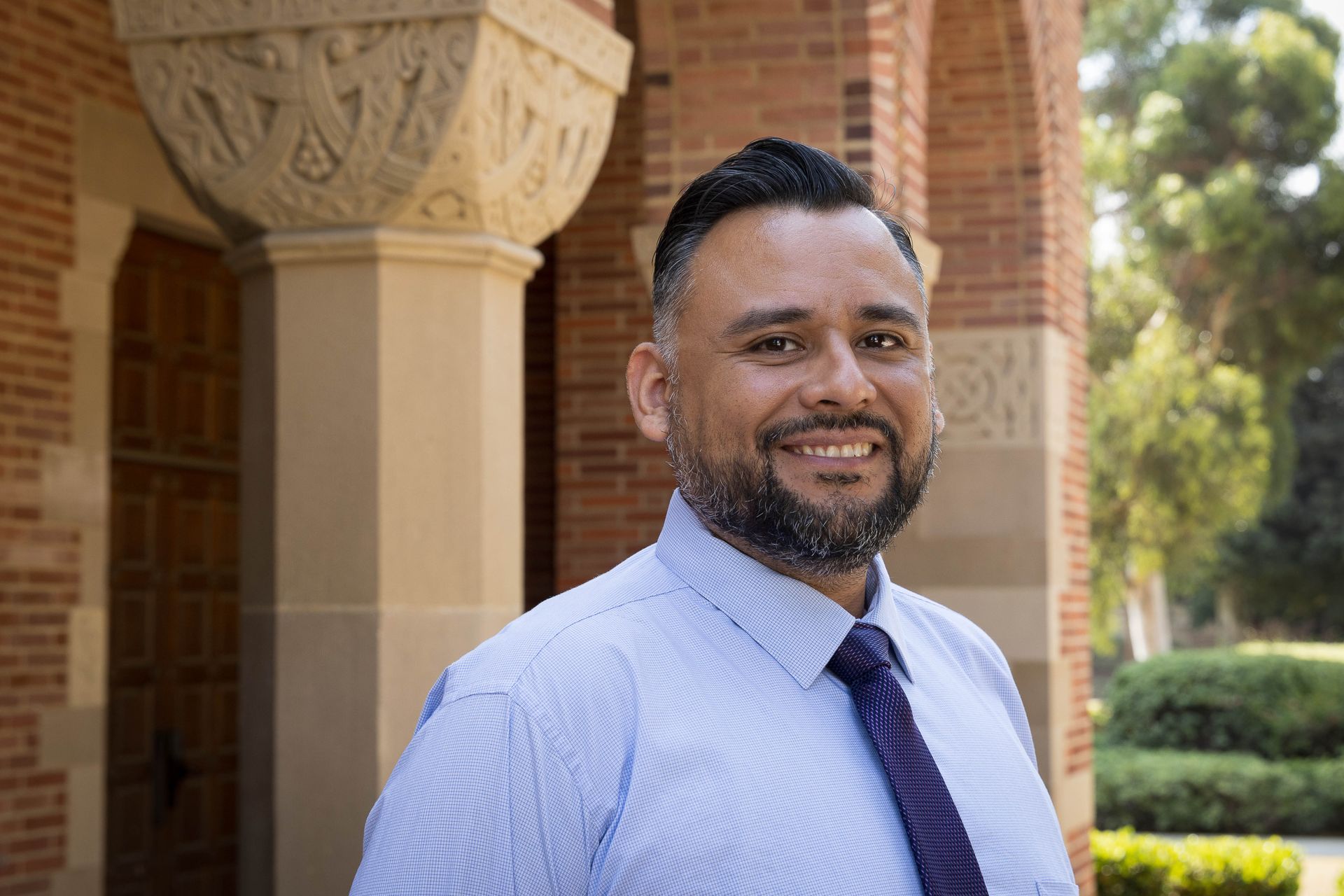 While appearing on a national podcast about higher education, Chancellor Gene Block made it a point to highlight the contributions of roughly 32,000 staff members who help make UCLA a place where faculty and students thrive and achieve. César Oyervides-Cisneros joined UCLA this year as the senior administrator of campus initiatives at the Chicano Studies Research Center, where he helps lead campus efforts to become a Hispanic-Serving Institution. 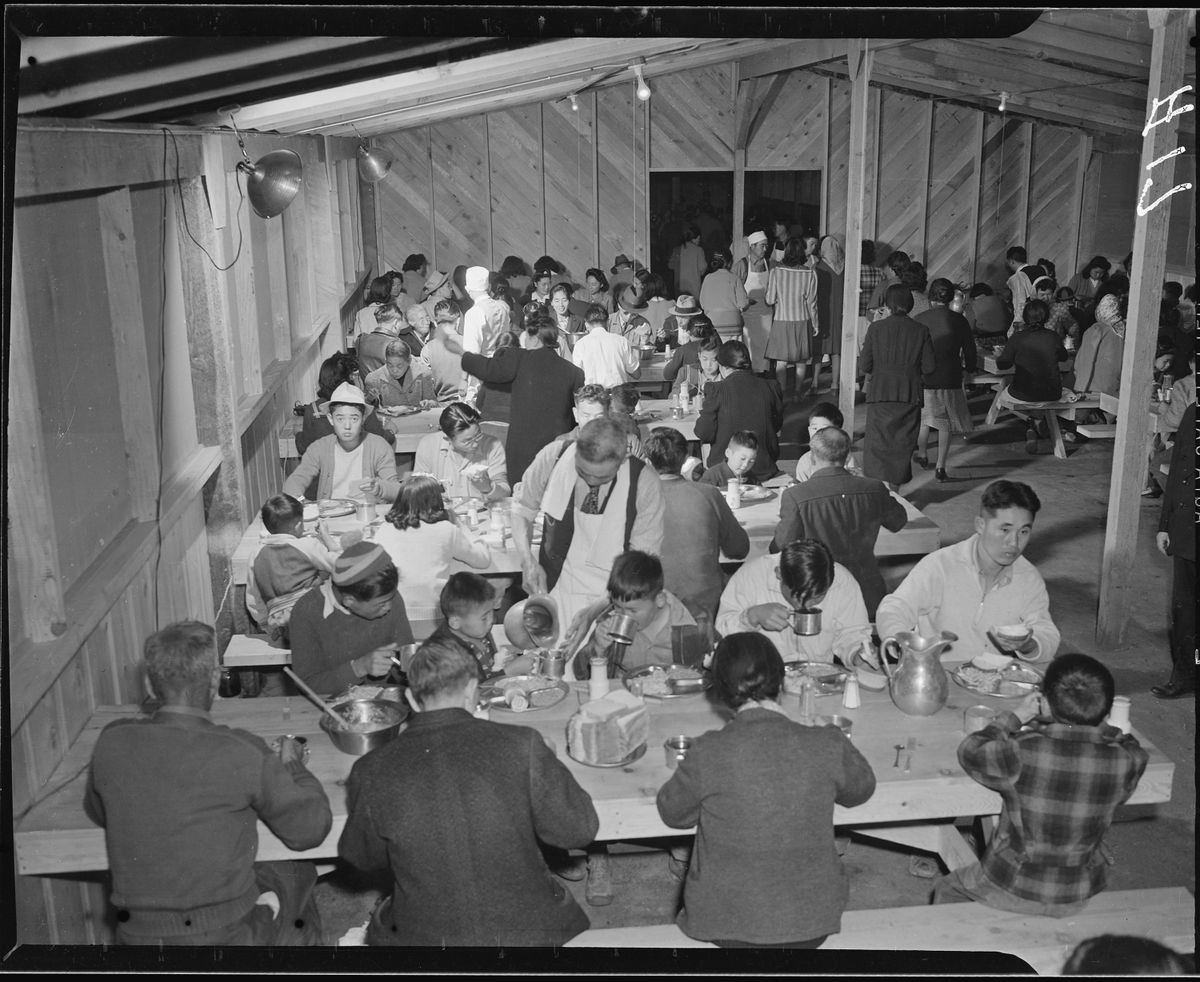 Clem Albers/National Archives
Mealtime at the Manzanar Relocation Center. Families were typically kept intact in the dining halls as well as in their living quarters in the barracks.

Among the most unusual classes at UCLA is one co-taught by Karen Umemoto, the Helen and Morgan Chu Endowed Director of the Asian American Studies Center, and public historian Brian Niiya. Their course provides students the opportunity to work with the growing library of primary-source materials related to the experiences of Japanese Americans, in particular their experiences in World War II–era prison camps.

“It’s very frustrating and uncomfortable to learn about and talk about injustices, especially racial injustices,” said Ryan Horio, a student in the course. “Some of the readings and lectures we’ve done in class have been very hard and emotional, but I think of it this way — we are going to have discomfort in all aspects of our lives. We have to learn how to deal with discomfort in general, and we have to remember and share these stories so we can prevent something like it from happening again.”

Other examples of how UCLA’s curriculum evolves: 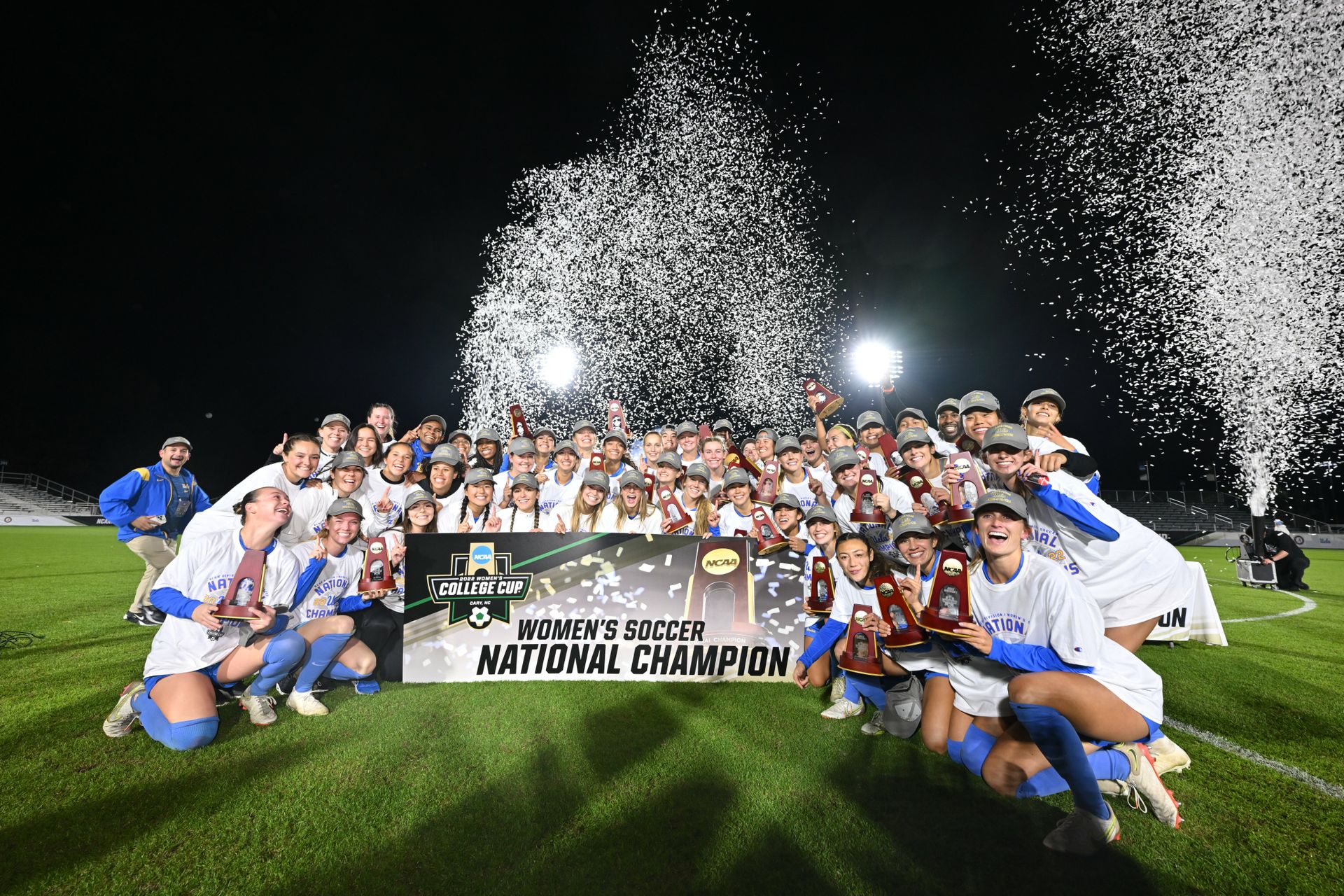 Another year, another title. The No. 1–seeded UCLA women’s soccer team earned the second NCAA national championship in program history and No. 120 in UCLA history after defeating No. 2–seeded North Carolina by a score of 3-2 in a thrilling double-overtime match at WakeMed Soccer Park on Dec. 5. 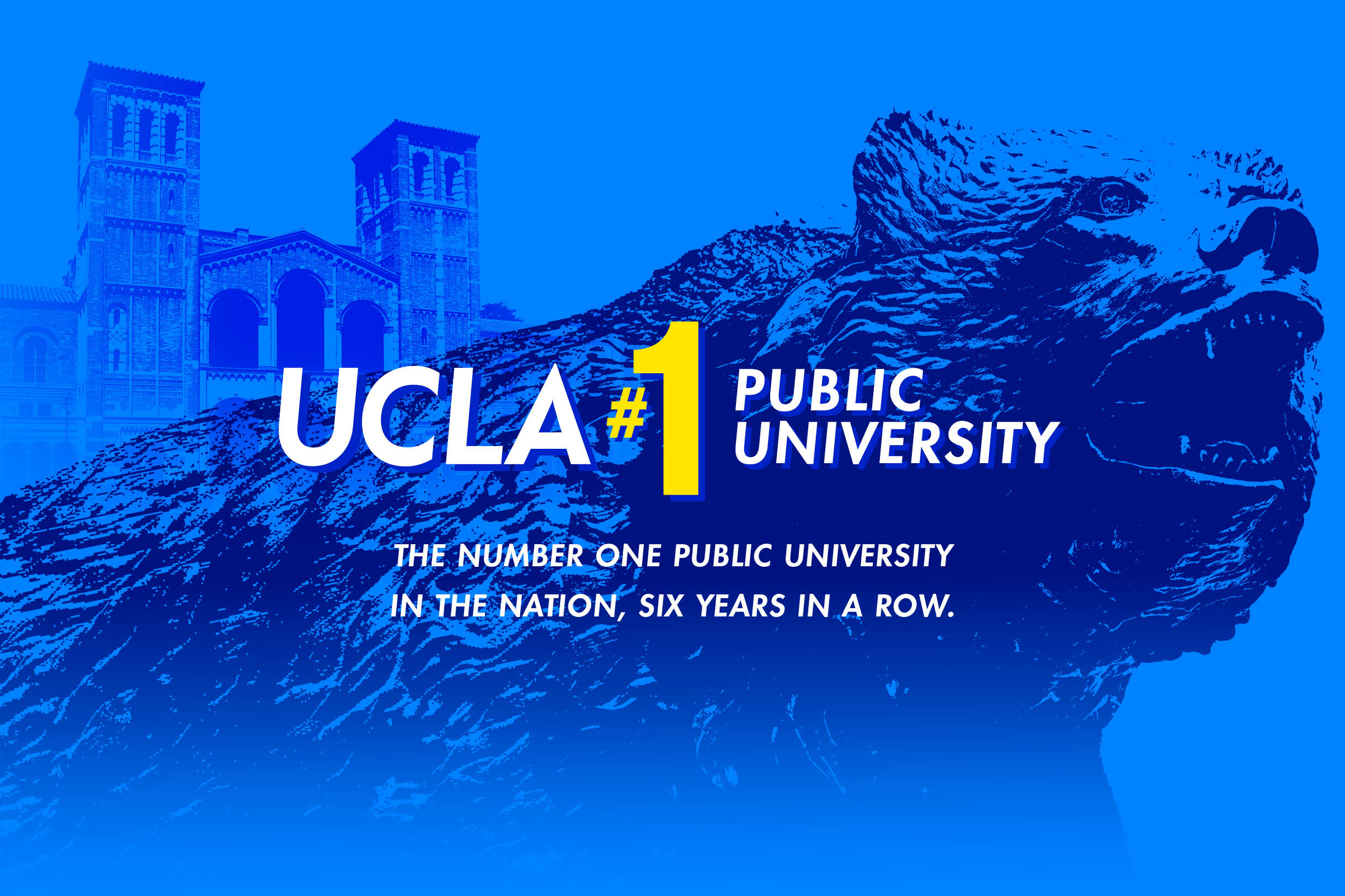 UCLA’s commitment to student success has attracted the attention not only of prospective students and their families — the campus has been the nation’s most applied-to school for several years running — but also of U.S. News & World Report, which for the sixth consecutive year named UCLA the No. 1 public university in the United States in its annual “Best Colleges” rankings.

The ranking, Chancellor Gene Block said, “is a recognition of the hard work of the staff and faculty, who believe deeply in our academic mission and drive it forward, even in the most difficult periods. It is a recognition of our students’ brilliance, creativity, ambition and persistence, both in their time on campus and in their lives as alumni.” 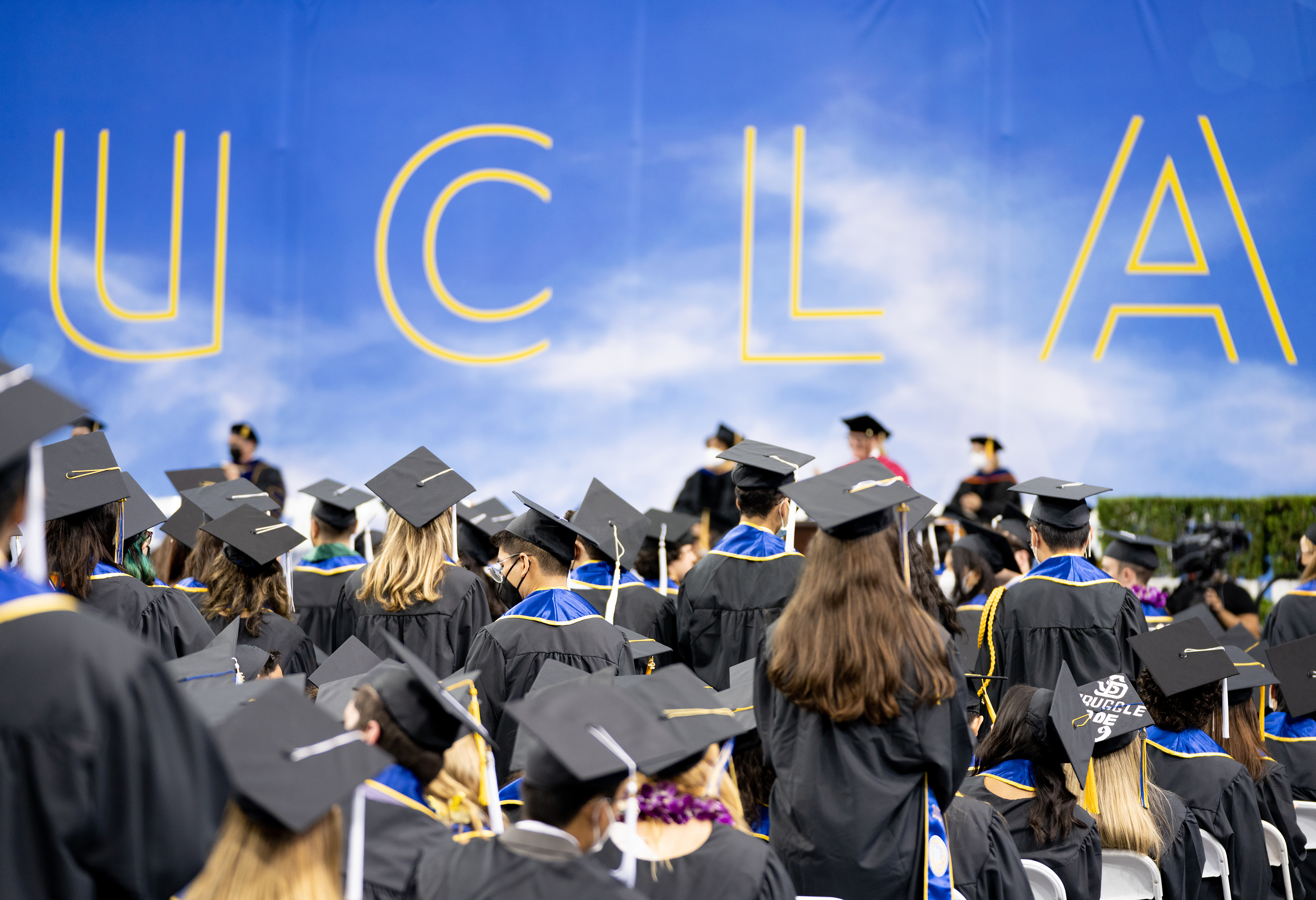 David Esquivel/UCLA
This is more like it. After a pandemic-forced two years of virtual commencement ceremonies, in 2022, students and their loved ones were able to celebrate in person again.

This year marked the return of a traditional commencement, with extra helpings of pomp, circumstance and excitement.