​From UCLA’s first years, music in all its forms has resounded across campus. Jazz, classical, rock, opera, world music, musical theater, film scoring and more are part of the UCLA tradition in performance, composition and scholarship. Luminaries such as Arnold Schoenberg, Henry Mancini, Kenny Burrell, Carol Burnett and even a young Ronald Reagan belong to the proud UCLA music legacy.

To celebrate the formal establishment of the UCLA Herb Alpert School of Music as the first music school in the University of California, we revisit some high points of the past 97 years. 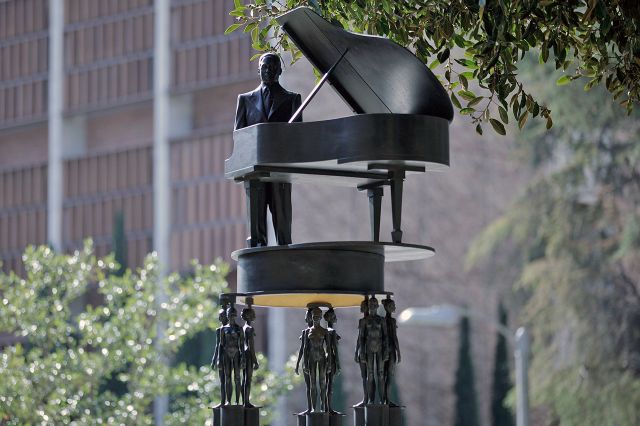 After hearing Duke Ellington play at a local club in 1937, some UCLA students asked the band leader if he would play a free concert in Royce Hall. “I’ve been waiting for someone to ask us!” Ellington reportedly answered. On the day of the big concert, Ellington mixed up the venues and drove to USC instead. He eventually did get to UCLA and delighted the crowd for more than four hours. Ellington is immortalized by sculptor Robert Graham outside the Schoenberg Music Building.

2. Every Bruin knows about Spring Sing 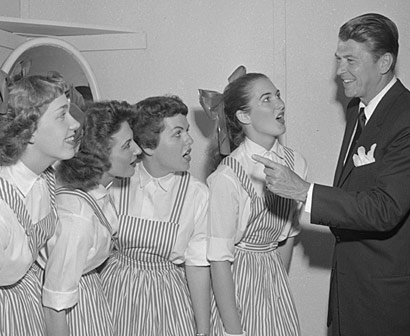 Every year, throngs of UCLA students line up before sunrise to snag tickets to Spring Sing. The showcase of top student talent began in 1945. The tradition is so popular it was held one year at the Hollywood Bowl. Celebrities typically serve as master of ceremonies, including future president Ronald Reagan six times.

3. We bring jazz into L.A. schools 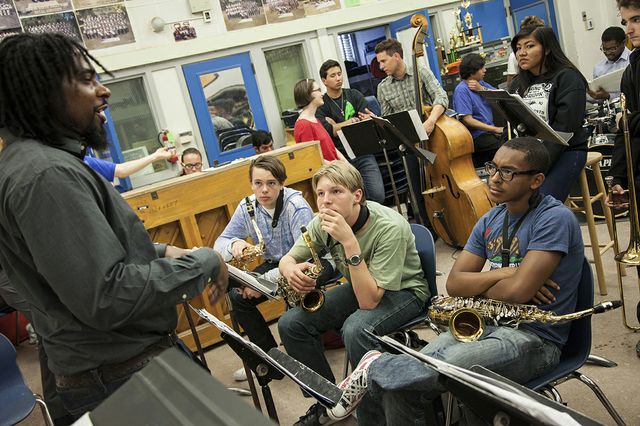 4. Serenading the master of march 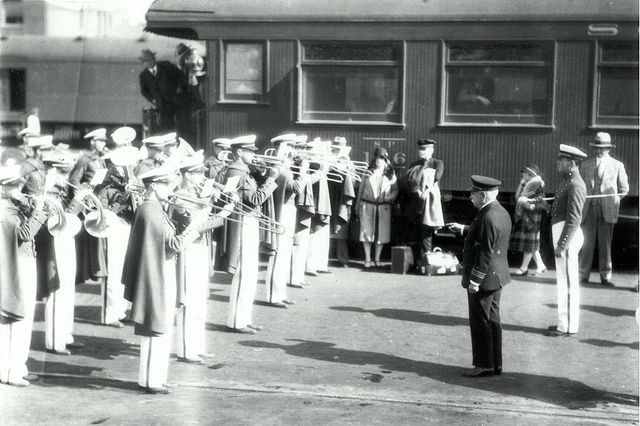 When America’s “March King” John Philip Sousa made a stop in Los Angeles during his final national tour in 1928, he was greeted at the train station by the UCLA Band. Sousa conducted as the Bruins performed his classic march, “Stars and Stripes Forever.”

5. Wild horses couldn’t drag us away 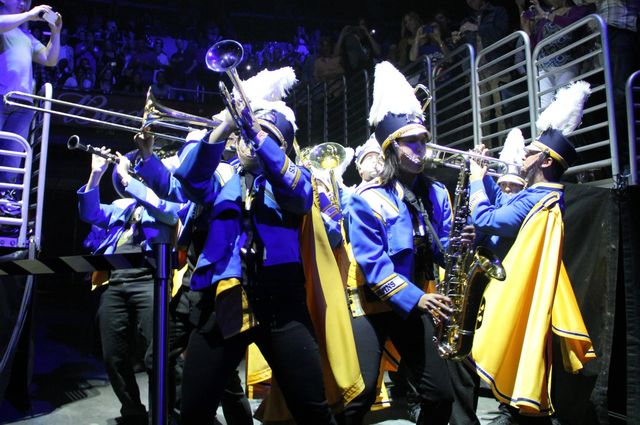 Fast-forward 85 years. In May 2013, the UCLA Bruin Marching Band opened the Rolling Stones’ 50 & Counting tour at Staples Center in downtown Los Angeles. With gold capes flying and tubas bobbing, 54 band members boogied into the arena to wild cheers and performed the first notes of “(I Can’t Get No) Satisfaction.”

6. An ex-patriate finds a home in Westwood 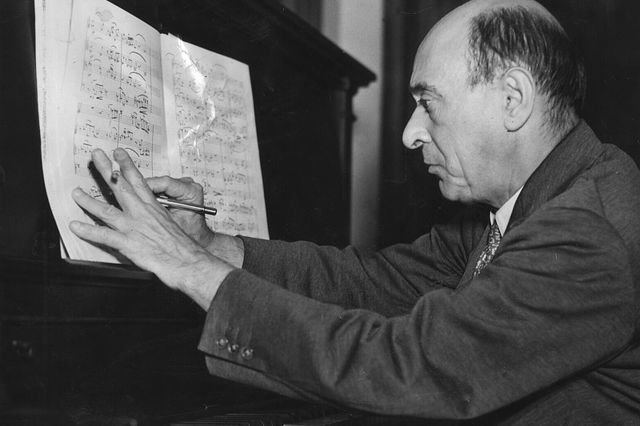 Austrian composer Arnold Schoenberg fled the Nazis and joined UCLA in 1936. Renowned for his complex atonal compositions, Schoenberg's influence over avant-garde musical thought endures. When his Fourth String Quartet, Op. 37 premiered at Royce Hall, he declared the concert “a perfectly commonplace affair ... Nevertheless I was very content with the attitude of the public.” The Schoenberg Music Building is named for him.

7. Dancing for the cause 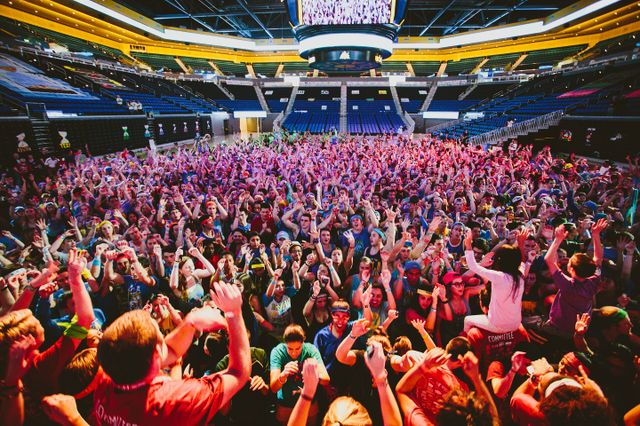 In 14 years of dance marathons, UCLA students have raised close to $4 million for pediatric HIV/AIDS organizations. Cheered on by thousands of their fellow students, dancers stay on their feet for 26 hours. The annual Dance Marathon is UCLA students’ most successful fundraiser every year.

8. The force is very definitely with him 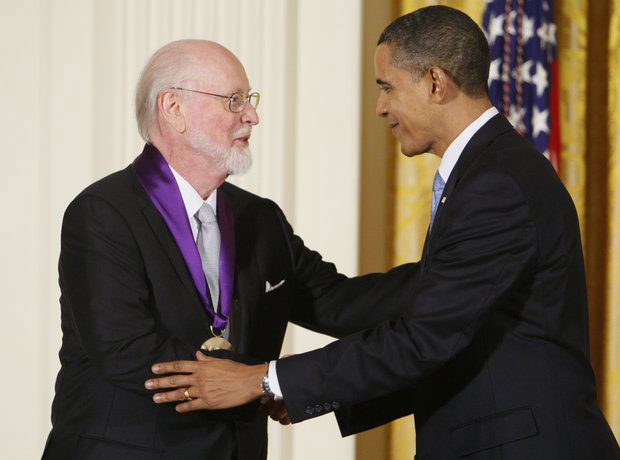 Alumnus John Williams, whose epic scores for “Star Wars,” “Jaws,” “E.T.” and “Schindler’s List” and other films have stirred the emotions of movie-goers for decades, has been nominated for Academy Awards an astounding 50 times, including this year. Williams has won five Oscars, 21 Grammys and three Emmys, and in 2009 he received the National Medal of Arts from President Obama.

9. Mariachi from the land of UCLA 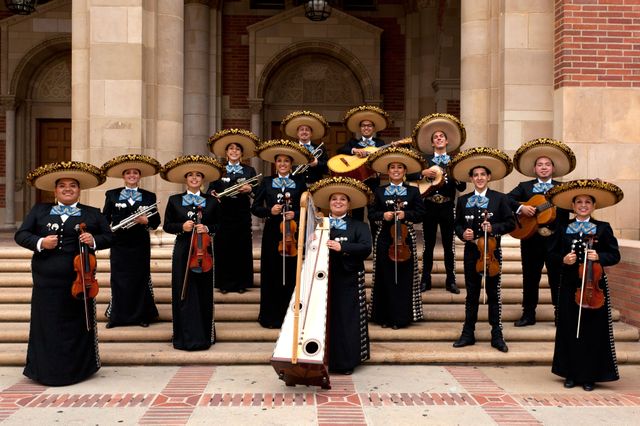 Mariachi Uclatlán, a group that formed at UCLA, changed the traditional genre forever and took mariachi into places it had never been heard. The UCLA mariachi tradition flourished under the late director Nati Cano, who played for presidents and for Linda Ronstadt.

10. George and Ira Gerswhin struck up the band 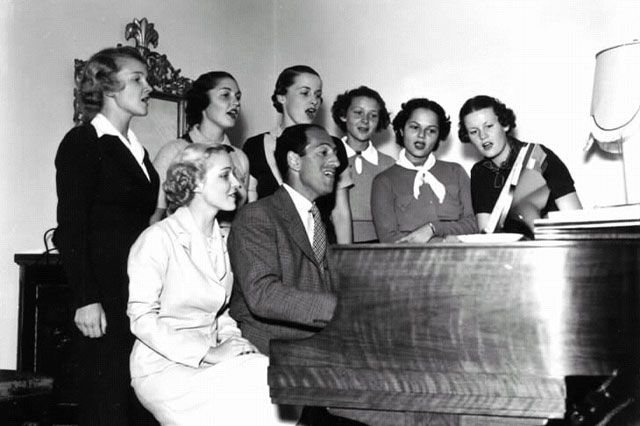 In 1936, composers George and Ira Gershwin gave their iconic hit, “Strike Up the Band,” new lyrics and dedicated the song to the UCLA Band. After the brothers performed “Strike Up the Band for UCLA” in the campus gymnasium, students presented the Gershwins with identification cards as honorary Bruins.

11. Royce Hall comes back more grand than ever 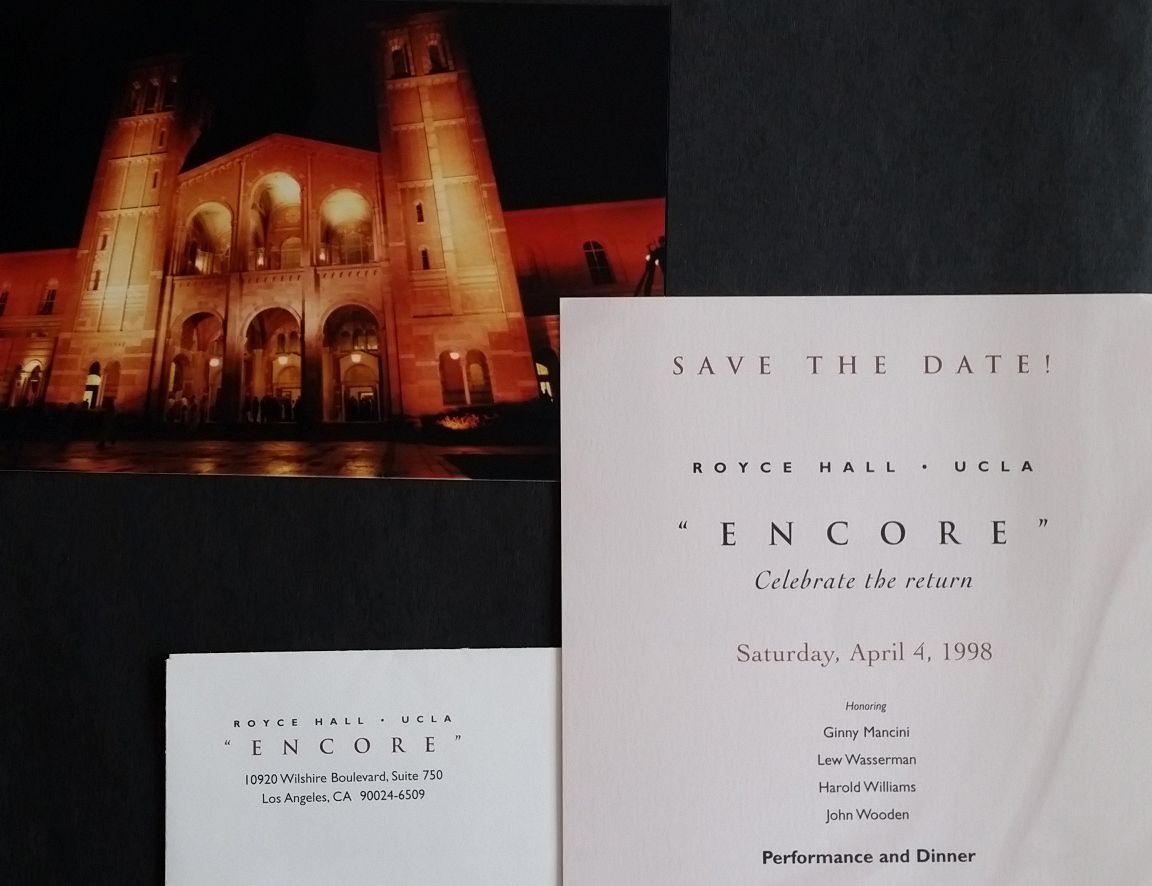 A black-tie benefit gala on April 4, 1998 holds a special place in UCLA lore. The reopening of Royce Hall’s auditorium, after four years of renovation following the Northridge earthquake, became one of the most successful benefits for arts education in Los Angeles history. Headlining the event was an eye-popping lineup that included Carol Burnett, Stevie Wonder, John Lithgow, Paul Simon, Don Henley and flutists James and Jeanne Galway. 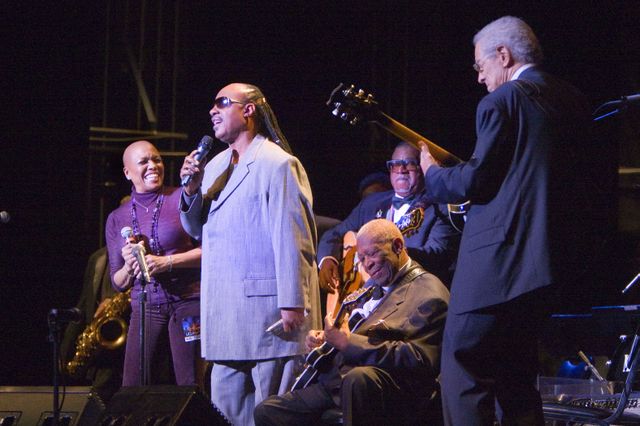 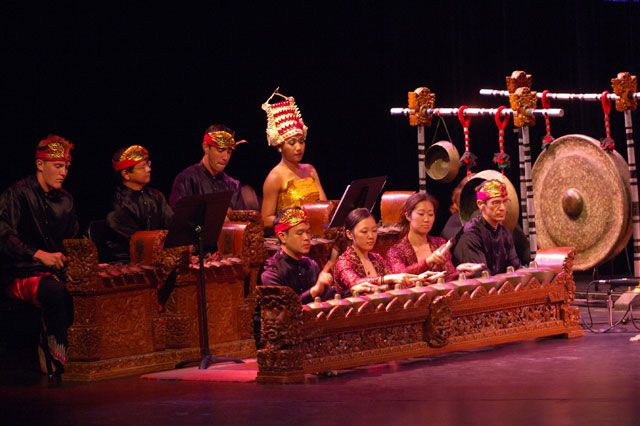 Founded in 1960, the Department of Ethnomusicology — now part of the UCLA Herb Alpert School of Music — is the only one of its kind in the U.S. and celebrated for the study of diverse musical cultures. It has one of the largest ethnographic audiovisual archives in North America and maintains one of the largest collections of musical instruments from all over the world. The stars of the collection are the Javanese gamelan, Khjai Mendung, and the Balinese gamelan, Sekar Anyar, shown above. 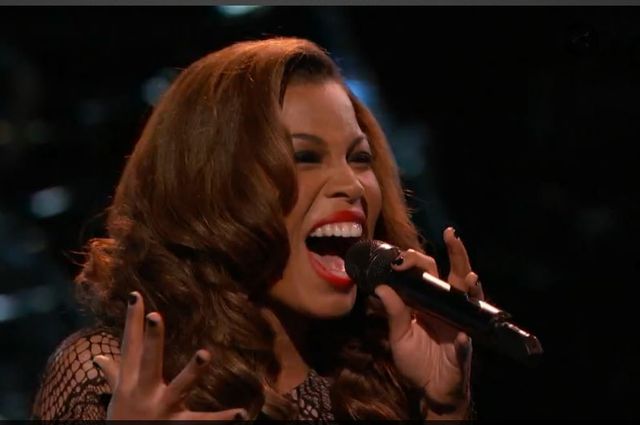 India Carney, then a senior voice performance major at UCLA, reached the finals in the eighth season of NBC’s “The Voice.” Carney came to the UCLA voice and opera program from LaGuardia High School in New York, where she had been a U.S. Presidential Scholar in the Arts.

15. Treasures of the UCLA collection 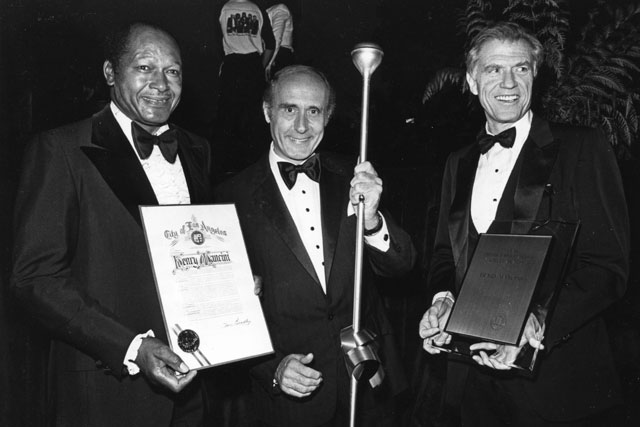 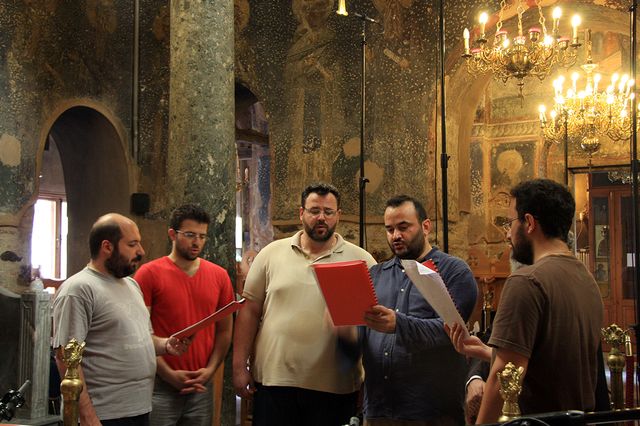 UCLA’s scholars continually advance the understanding of music with cutting-edge research. Recent studies include the healing benefits of live music, insight into how dissonant music brings out the animal in listeners, and calculating what chanting actually sounded like in 14th Century Byzantine churches.

17. Music belongs in the classroom too 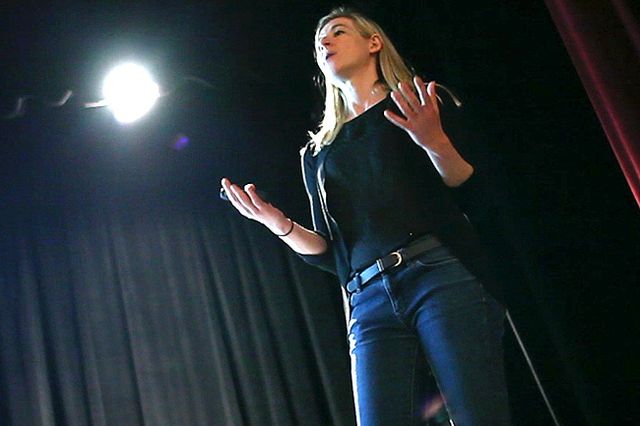 This quarter, UCLA students are getting a tantalizing earful on everything from medieval music to Mozart, and from Motown to stardom strategies for musicians. A new course offered last year focused on punk music, history and subculture, created by assistant professor of musicology Jessica Schwartz.

18. Music of the frontera 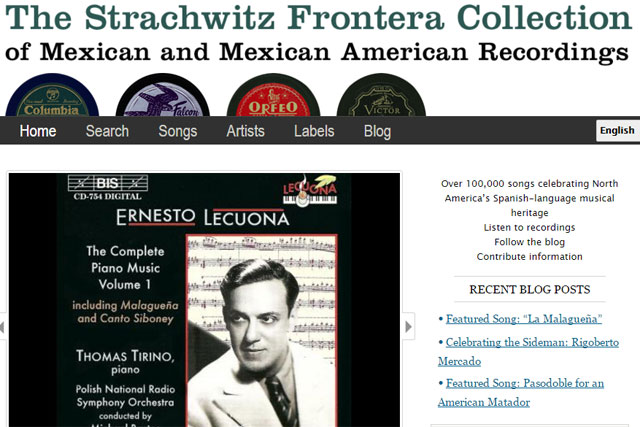 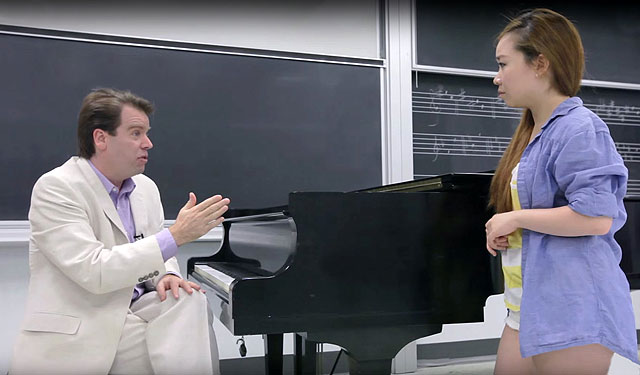 Michael Dean, an internationally recognized opera singer and the chair of vocal studies, is a much sought-after vocal coach. He has helped countless celebrities flawlessly deliver “The Star-Spangled Banner,” a notoriously challenging 19th-century piece. He also preps student singers to perform the national anthem at UCLA commencements.

20. Legendary fingers have touched this piano 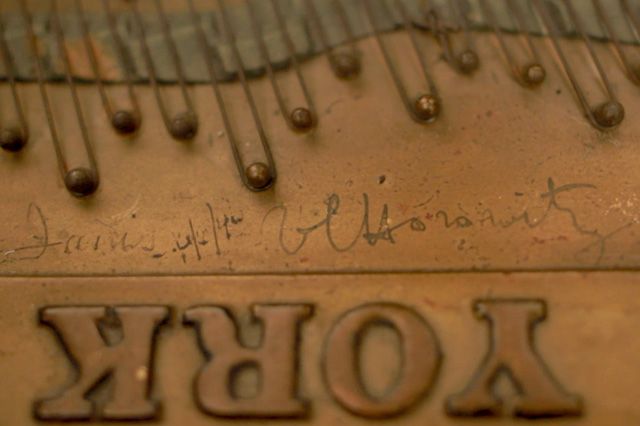 A practice piano in the Schoenberg Music Building carries some hidden musical history. A gift from the estate of actor Edward G. Robinson, the piano bears the signatures of some great 20th century composers and musicians, among them Igor Stravinsky, Jascha Heifetz, Sergei Prokofiev and Vladimir Horowitz. Gary Gray, a professor of woodwind studies, recently gave UCLA Newsroom a video tour.

21. And of course, awesome musical alumni 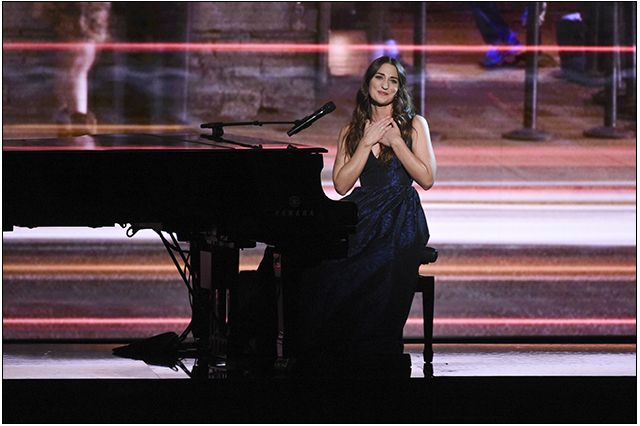